Cambridge International IGCSE, AS Level and A Level Examinations |20 September 2019 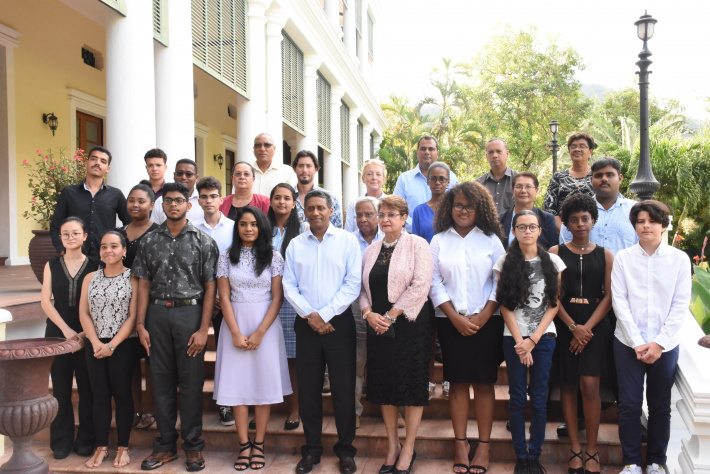 This was in a brief ceremony at State House in which he congratulated them on their achievement and presented them with tokens in recognition of their accomplishments.

To commence the ceremony, Minister Mondon addressed the students, congratulating them and their parents on the outstanding performances stating that it will serve to inspire others to perform well in future examinations.

“Today we are celebrating the enthusiasm, discipline, commitment and hard work of some of our students. We recognise their resilience and perseverance which resonates with our national theme to valorise a hardworking culture and is in line with our President’s wish for all Seychellois to participate in the culture of hard work for the prosperity of Seychelles,” Minister Mondon said.

“This year, Seychelles has won 38 Cambridge International Awards from 20 award recipients from both public and private institutions. Our greatest desire is to see more of our students excelling and learning and recording high academic achievements,” Minister Mondon stated.

Minister Mondon concluded her address by thanking President Faure for valuing and recognising the achievements of the young individuals.

The students, all selected by Cambridge, were then presented with tokens by President Faure before posing for a group photo with other students from their respective categories.

The three best performers across 3 AS Levels were next to receive their tokens. Sandra Rachel was classed third, Loren Madnack second and Viswarajan Pillay classed in first place.

The next token was presented to the learner, Sanjeetha Pillay who was categorised as best performer across 7 IGCSEs.

As for Top performers in the country for A Levels and AS Levels, Dylan Low Seck was recognised for Mathematics at A Level, Ishika Sambadoo for AS Biology, Viswarajan Pillay for AS Business, Jean Paul Lebon for AS Mathematics and Abisheak Sathiyamoorthy for AS Physics.

The final and most coveted awards, the Cambridge Awards for top 10 in the world went to four learners.

As for Maxime Le Gac, he was ranked 2nd in the world for Foreign Language French at IGCSE Level. The remaining awards went to Sanjeetha Pillay who won 4th, 5th, 6th and 7th in the world for IGCSE Information and Communication Technology, Biology, Geography and Chemistry respectively.

The students then posed for a group photo with President Faure and officials from the Ministry of Education and Human Resource Development.