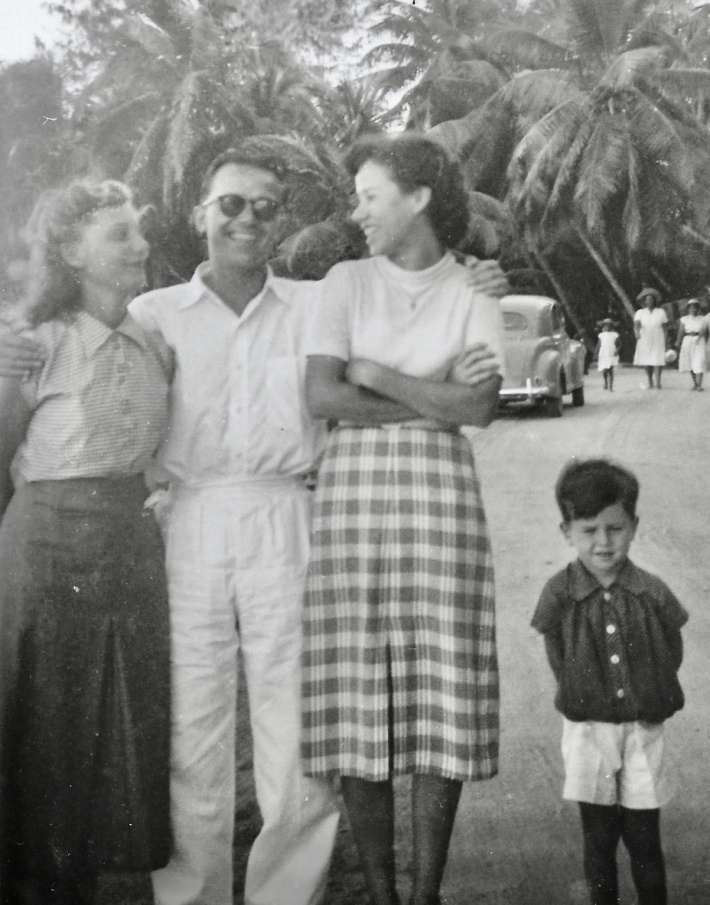 William (Bill) McAteer died on November 30, 2022 aged 95, the same year he received an MBE in the late Queen’s New Year’s Honours, for his services to Seychelles history. He researched and authored the history of the Seychelles Islands, from discovery to modern day, from original source material. His work is published in five books, the result of over 40 years of research.

However, his work in recording the history of the former British colony was just the final chapter of a life jam-packed full of adventure. A life with many twists and turns, where a combination of chance and wanderlust resulted in many good tales to tell.

The adventure starts in Glasgow. His father was Scots Irish, his mother from Aberdeenshire. Both of modest means, his childhood was spent on a council estate in Possil, one of the less fashionable parts of the city. His parents could just afford a fee-paying school, Allan Glen’s, where he showed an aptitude for languages.

At seventeen he joined the Glasgow Herald as a copy boy; working on the phone, noting in shorthand the news as it was called in, and making cups of tea for the sub-editors. It was hardly glamorous work, but he thrived, earning extra money at weekends by reporting on lower league football.

He was conscripted in September 1945; luckily for him, one week after the war ended. He quickly decided he wanted to be an officer; he was commissioned in the Highland Light Infantry as a 2nd Lieutenant. Mixing with a different social class in the officers’ mess sparked an interest in university. After he was demobbed, despite his father’s disapproval, he studied at Glasgow University, graduating with an MA Hons in History and Economics. From there he returned to the Glasgow Herald newspaper, but this time not making tea, he was a fully-fledged sub-editor.

His time in the army had ignited an interest in travel. As a student, he travelled by ship to Helsinki, and spent time working in Stockholm. He volunteered for a war rebuilding project in the badly bombed French city of Rouen. Consequently, he developed a life-long passion for languages; he was fluent in French, and studied Swahili, Arabic, Swedish, and Italian. He was never able to speak Creole, although he had a reasonable understanding of the language.

His love of adventure, and willingness to meet life head on, with a relative absence of caution, were without doubt some of his most defining characteristics. He was, it seems, determined to escape the confines of post-war Glasgow.

In 1955 he accepted a post as sub-editor at the East African Standard in Nairobi. His father was not pleased, concerned at news of the Mau Mau rebellion. Typically stubborn, Bill ignored him.

After a few months in Nairobi, he was advised he was due a holiday. Asking colleagues in the newspaper for suggestions, someone mentioned the Seychelles, lying some 1,000 miles off the Kenya coast.

He set off by cargo ship, on the Danish ship Roggven, from Mombasa to Seychelles in late 1955.

He stayed at the Pirates Arms in Victoria; and on his first night went to the nightclub called Sharkey Clark’s in Quincy Street. It was here that Sharkey, who was reputedly a colourful character, advised him to visit Beau Vallon, as it was far nicer. So the next day Bill booked into the Fisherman’s Cove. Here he met Juliette Mellon, a Seychelloise primary schoolteacher. She was the daughter of Jules and Alexandrine Mellon (neé Payet), who owned a coconut and patchouli plantation at Anse Theodore on Cerf Island, but had recently retired to English River. Juliette was very friendly with the owner of the hotel, Raymonde Donkin.

Romance blossomed and he married Juliette in 1958 in Nairobi. Thus, his visit to the islands, for only a few days, led to a life-changing connection with the Seychelles.

He spent the next 20 plus years working on newspapers throughout East Africa; he was Editor of the Mombasa Times and the Uganda Argus. In 1972, working with the support of the British Overseas Aid scheme, he set up the first School of Journalism in Sub-Saharan Africa; at the University of Nairobi, serving as a Senior Lecturer and the Director for the School, which trained young Africans in the skills of journalism and printing; important work in post-colonial Africa. He also worked as a stringer for the BBC, spent time working with the Agence France Presse in Paris, and had spells with Reuters and the Portsmouth News. From 1984 he worked as Deputy Editor of the Gulf Times in Qatar, before retiring with Juliette to a home they had built in Glacis in 1994.

His time in East Africa coincided with the end of Empire, a time of momentous change. He interviewed many of the key players and personalities of the time; Julius Nyerere, Milton Obote, Idi Amin, Abdul Nasser, Yasser Arafat, Albert René, Billy Graham, Mohammed Amin, John Stonehouse and many others. He was first to the Colito Barracks after the Royal Marines snuffed out the 1963 Tanganyika Mutiny despite the considerable personal risk; he reported on the Obote assassination attempt of 1967; questioned Idi Amin at the scene of the Kabaka’s Palace storming in Kampala in 1968; and he saw first-hand the carnage of the 1977 Lufthansa 747 crash in Nairobi.

His adventures weren’t confined to his work. He climbed Kilimanjaro in 1965; was a keen horseman; restored boats; taught himself to sail; played tennis; and learned to ski aged 55. In his youth he was also a keen cyclist; once cycling from Glasgow to Birmingham just to meet a girl he fancied. (Unsuccessfully, as it turned out.)

In retirement he dedicated his time in researching, writing and publishing a history of the Seychelles islands. Ultimately this is his legacy; a legacy so many in Seychelles will be aware of. His five books are Rivals in Eden (1742-1810), Hard Times in Paradise (1827-1919), To be a Nation (1920-1976), Another Story (1976-2020) and Echoes of Eden, a collection of historical essays. His work took him to La Reunion, Mauritius, Paris, the British Library, Kew Gardens, Somerset House, the Boston Whaling Museum, the French Naval Archives in Toulon, the archives in Seychelles, and many other places in-between.

A UK citizen, he was naturalised as a Seychellois in 2016. His 28 years living in retirement in Glacis were undoubtedly some of the happiest days of his life. His children and grandchildren visited for holidays, his research meant that he met many prominent and interesting Seychellois, and he was truly at home here. He embraced Seychelles and Seychelles embraced him.

He passed away at his care home in Ma Constance on November 30, 2022 (by coincidence on St Andrew’s Day, the patron saint of Scotland.) He leaves three children – Ian, Jean and Brigitte – as well as eight grandchildren. His wife Juliette passed away in 2011.

To his family and friends, it will be his love of adventure, together with his sense of humour, warm personality, and quiet determination, that he will be remembered for. 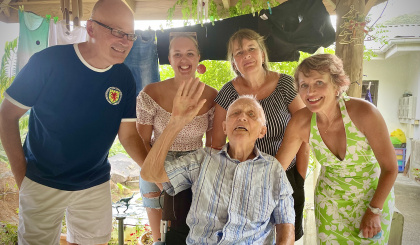 With family at Ma Constance 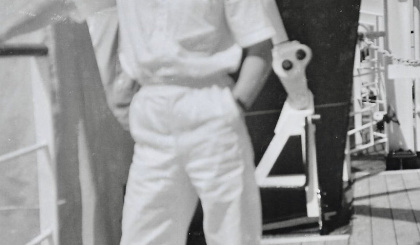 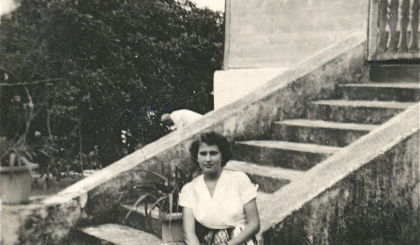