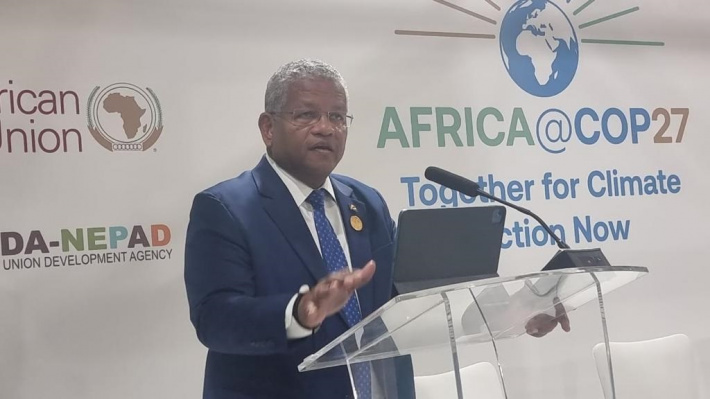 President Wavel Ramkalawan conveyed a plea for global collaboration and partnerships towards worldwide ocean-based mitigation and adaptation, and building resilience through common actions.

The President called out to other heads of state, governments and partners during his keynote address at the COP27 Great Blue Wall (GBW) side-event on Monday, to take efforts up a notch, by adopting an action-driven oriented and focused approach in meeting the commitments of the GBW initiative.

Deemed as the nexus of climate change adaptation, conservation, and the blue economy, the initiative was endorsed by the World Conservation Congress in 2021, and subsequently launched at the United Nations Framework Convention on Climate Change (UNFCCC) COP26 in Glasgow.

It recognises that the marine and coastal areas along the eastern shores of Africa are unique for its biodiversity, and, the accelerating and mounting threats that coastal communities in the West Indian Ocean region (WIO) face as a result of climate change.

As such, the initiative is a major Africa-led effort toward a nature-positive world seeks to enhance the resilience of the planet and societies to halt and reverse nature loss by 2030. It aims to create interconnected protected and conserved marine areas (“seascapes”) to counteract the effects of climate change and global warming in the WIO region, while unlocking the potential of the blue economy to become the driver of nature conservation and sustainable development outcomes.

“We, advocates, promoters and leaders in this ‘blue’ space therefore have to take on this challenge and take on this responsibility in a collective manner. It is up to us to build this ‘great blue wall’ and to build resilience through common actions in the face of common threats, for after all, we all share the basic needs to feed our people, our families now and in the future. In order for this need to be effectively satisfied, it is imperative that our environmental integrity remains intact,” President Ramkalawan said.

“It is a known fact that aquatic resources, the likes of rivers, lakes, seas and oceans are the world’s biggest asset, for they cover about 71 percent of the earth’s surface. We cannot ignore the fact that it is us who depend on these resources, and now more than ever, we need to gear our efforts towards the protection and the sustainable use of these resources,” President Ramkalawan stated.

With the overall goal of accelerating and upscaling ocean conservation actions while building socio-ecological resilience and supporting local livelihoods, the regional response to climate change will support the establishment of fair, inclusive and participatory governance mechanisms at seascape level, scale up the operationalisation of nature-based solutions, and accelerate the development of blue entrepreneurship.

President Ramkalawan went on to express Seychelles’ unswerving commitment towards the visionary initiative, and forming partnerships which “strives to create high level allegiance for the salvation of our global heritage”.

“Seychelles, being a large oceanic state truly values and supports initiatives that will advance Sustainable Development Goal 14. We strive to ensure that our policies and development plans are centered on conserving and sustainably using our ocean and marine resources to ensure sustainable development,” he added.

For the initiative to deliver on its potential within the timeframe, the highest level of leadership and support, both from proponent countries as well as from potential supporting countries is required.

Unprecedented levels of funding will have to be catalysed and mobilised to support actions on the ground and deliver the level of impact required to achieve the GBW objectives.

The GBW side-event was hosted by the government of Seychelles together with key, instrumental partners including the United Nations Economic Commission for Africa (UNECA), the International Union for Conservation of Nature (IUCN) and UNFCCC COP27 High Level Climate Champions.

The accompanying photos show some highlights of the GBW side-event. 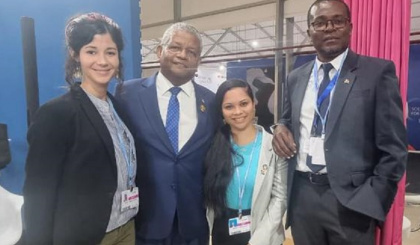 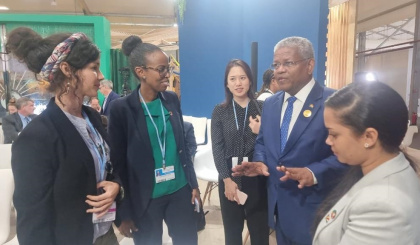 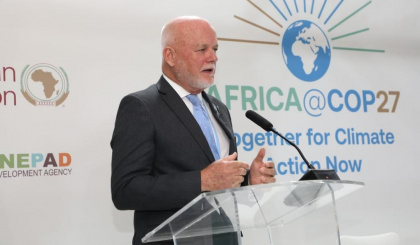 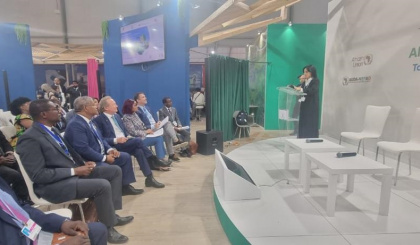 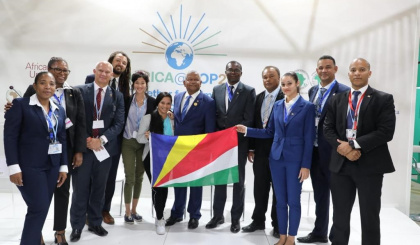