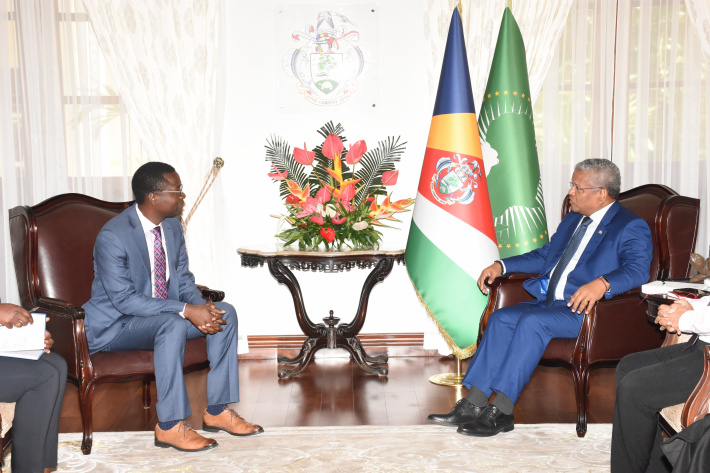 • Calls for strengthening of the economy to resist any future shocks

The International Monetary Fund’s Chief of Mission, Calixte Ahokpossi, has said in the aftermath of the Covid-19 pandemic, Seychelles needs to strengthen its economy, making it more resilient in case of another shock.

Mr Ahokpossi made the statement after paying a courtesy call on the Head of State, President Wavel Ramkalawan, at State House yesterday morning, upon his arrival to Seychelles, for a one-week mission.

He said the visit, which is part of IMF’s regular contact with Seychelles, was to take stock of the economy.

“To see how things are going and to assess how the relationship is in terms of economic and financial programme with the Seychelles,” he said.

Seychelles is presently under a 32-month Extended Fund Facility (EFF) arrangement that was approved on July 29, 2021 and the IMF’s executive board completed the second review of the country’s economic performance in June this year.

In its review the organisation said that the economy had strongly recovered in 2021, with GDP growth exceeding expectations but the surging commodity prices are expected to weigh on the external and fiscal balances in 2022.

IMF also said that government has made impressive progress in implementing the EFF programme and restoring macroeconomic balances. However, the country should maintain the buildup of buffers against shocks which remain critical in the current global environment.

This was echoed by Mr Ahokpossi following yesterday’s discussion with President Ramkalawan.

He said the country’s key priorities remain to “rebuild the buffers that were eroded during the Covid-19 pandemic and to be ready for investing for longer terms and also strengthening the economy and making it more resilient in case there is another shock”.

It should be noted that with the completion of the review under the EFF programmes, the Seychelles authorities are presently allowed to draw the equivalent of (Special Drawing Rights) SDR6.5 million, which is about about $8.7 million, bringing total disbursements under the current EFF to SDR54.5 million (about $72.6 million).

During their mission, the IMF delegation will be holding various discussions with high government officials and organisations.

The IMF’s Chief of Mission will be giving a press conference next Wednesday upon completion of his working visit to Seychelles.