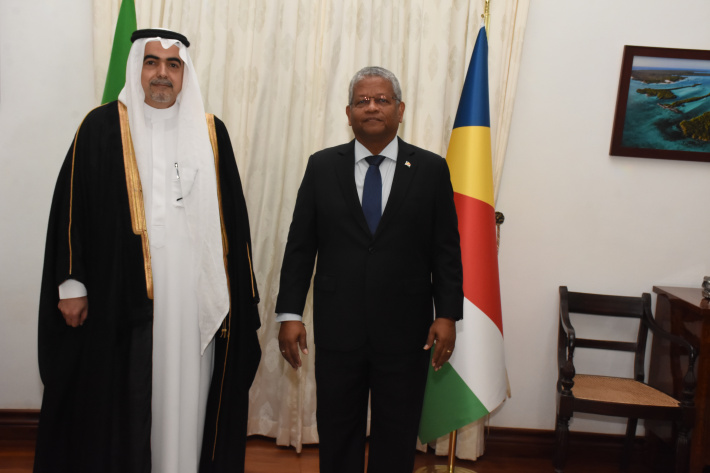 Ambassador Aleisa in a souvenir photograph with President Ramkalawan after presenting his credentials (Photo: Louis Toussaint)

Mr Aleisa, who will be based in Maputo, Mozambique, replaces Dr Mohammed A. Khayat who was accredited to Seychelles on February 25, 2020.

“It was an honour to meet with His Excellency, the President, to present my credentials as ambassador of Saudi Arabia, and to convey to him the greetings of the Custodian of the Two Holy Mosques King Salman, and the Crown Prince, and to assure him of our best wishes for the people and the Republic of Seychelles, and our hopes to improve and build stronger relations with Seychelles,” Mr Aleisa conveyed to national media.

During his visit to State House, he also called on Vice-President Ahmed Afif, before proceeding to meet with other cabinet members.

Saudi Arabia and Seychelles established diplomatic relations on September 28, 2000. The two states have since signed memorandums of understanding (MoUs) to strengthen cooperation and the exchange of expertise, especially in the fields of tourism.

The government of the Kingdom of Saudi Arabia is led by Custodian of the Two Holy Mosques, King Salman bin Abdulaziz Al Saud. The Crown Prince Mohammed bin Salman serves as the Deputy Prime Minister, and Minister for Defence.