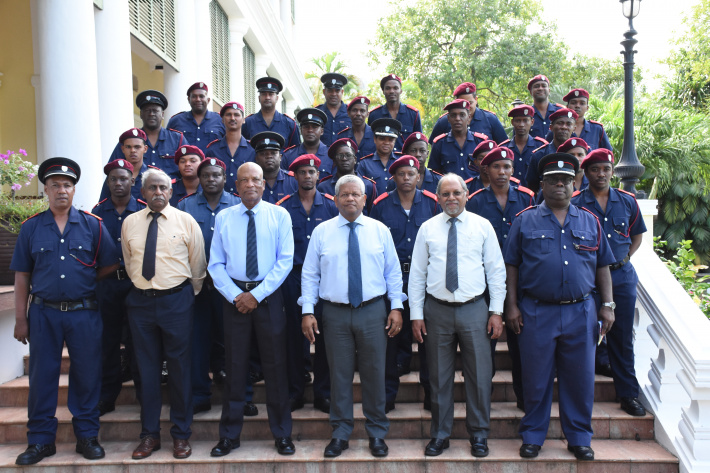 Thirty-one firefighters have been commended for their bravery and sheer professionalism during the ammonia leak rescue mission on board a Spanish vessel in June, which claimed the lives of two Spanish nationals.

The firefighters from the New Port headquarters were received by President Wavel Ramkalawan at State House yesterday afternoon where they were each presented with a small token of appreciation.

Also present at the ceremony were Vice-President Ahmed Afif and the Minister for Internal Affairs, Errol Fonseka.

When addressing the firefighters, President Ramkalawan said it was an honour to welcome them to State House and to thank them on behalf of the people of Seychelles for their hard work, courage and devotion, to ensure the country remains safe at all times.

He said he had witnessed their courageous stance in many instances and as front liners, they take risks every day to save lives not only during fires, but other incidents such as road accidents and other search and rescue missions.

He commended the Seychelles Fire and Rescue Services Agency (SFRSA) and thanked the officers who were on duty on that fateful day.

“For the June incident, you once again responded and for that I want to say the country recognises and appreciates your action, your courage, devotion because as firefighters, like other officers in uniforms, you have a special responsibility,” said President Ramkalawan.

He also gave his commitment that the government will continue to support them and invest in equipment, which they need badly and address other challenges facing the agency.

“We have a huge lack of equipment not just to put out fires but protective gear for you as well. We have ensured this is catered for in the budget immediately as we have to protect your lives,” he added.

President Ramkalawan also said that as part of efforts to improve their working environment and wellbeing, the government has also secured a plot of land for the construction of a new headquarters for the officers based at the New Port and that discussion for the plan is still underway.

For his part, Minister Fonseka, under whose ministry SFRSA falls, also thanked the officers for how they responded to “tackle the invisible threat”, stating the risk they took while performing a high-risk operation showed their dedication to the profession and displayed many great qualities.

“These include trust among yourselves, when you are working, you’ve got to trust the man next to you, it shows teamwork, you cannot do anything without teamwork, and following your standard of procedures,” said Minister Fonseka.

He called on them to keep up the great work and added “there were many lessons learned and work to improve safety and efficiency is something which is always ongoing”.

Minister Fonseka thanked the president for making time in his busy schedule to meet with the firefighters, which he said was appreciated.

This was echoed by Assistant Section Leader, Nadim Lucas, who said yesterday’s event was an encouragement for the officers and motivated them to work harder.

“In April next year it will be exactly 13 years since I joined the agency and this is the first time that we are invited at State House and get a personal thank you from the president so we are a bit emotional but we feel motivated,” he told Seychelles NATION.

Lucas was the first officer to board the Spanish purse seiner, Albacora Cuatro, on Wednesday June 15, to assess the situation before the other officers could join the rescue operation. He said by then the vessel was filled with concentrated ammonia.

“It was a highly risky area and any mistake could have cost lives, from not wearing your gear properly or not observing the safety measures. We took time to mobilise our team as we had to ensure that our communication system was working properly and we had all the right updated information before we deployed our men on the vessel,” he explained.

Lucas said it took over two hours to remove the first casualty but the mission to retrieve the second casualty had to be abandoned due to the ammonia concentration.

He said the situation could have been worse, had they not been trained properly to work in highly risky environment.

“People do not understand our work and believe firefighters just sit around and play dominoes or sleep. Our job comes with a lot of responsibilities and the ammonia incident was a typical example of how dangerous our work is, so we need the support from everybody,” he added.

It should be noted that yesterday’s ceremony was also to bid farewell and honour the Chief Fire Officer, Albert Rose, who is leaving the service after forty-five years.

Minister Fonseka who described Rose as “an admirable example of perseverance, leadership, strong discipline and essentially devotion to duty”, thanked him for 45 years of dedicated service to the force, his colleagues and SFRSA and the country.

“We can describe you as a fireman who still glows with fire so good luck and I wish you well,” said Minister Fonseka.

For his part, President Ramkalawan thanked him for his many years of devotion and also called on him to make himself available to junior and senior officers and to share his vast knowledge.

“When we accumulate that much experience, we cannot leave with it. It will be a mistake. We need to continuously share these knowledge and experience with the younger ones because at the end of the day, our main goal is to ensure the safety of the country, and we want the next generation to take over this responsibility,” he said.

In an interview to Seychelles NATION, Mr Rose said he was happy to be retiring after so many years of service and glad of the development that has taken place over the years to improve the service.

“When I started we had three Land Rovers and today we have witnessed so many development, with the services closer to the community as we continue to build more fire stations at district level, so as to minimise the time it takes us to respond to a fire or rescue mission,” said Mr Rose.

His special advice to the younger generation is to “remain disciplined, maintain the high level of standard, to listen ad obey and to be serious in their work. What we see nowadays is that some young people do not want to hear the word ‘no’. They think that if you say no to their demands then you are their enemies. They should remove this concept from their minds,” he concluded.

Meanwhile, Rose said although he was retiring from the fire services, he does not plan to remain idle at his residence in Union Vale. He told Seychelles NATION he was going to venture into other areas, like agriculture, fisheries, or animal rearing. 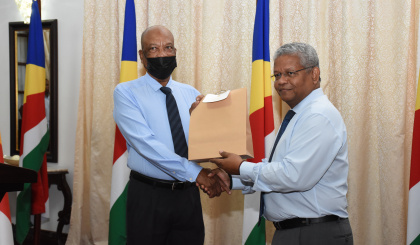