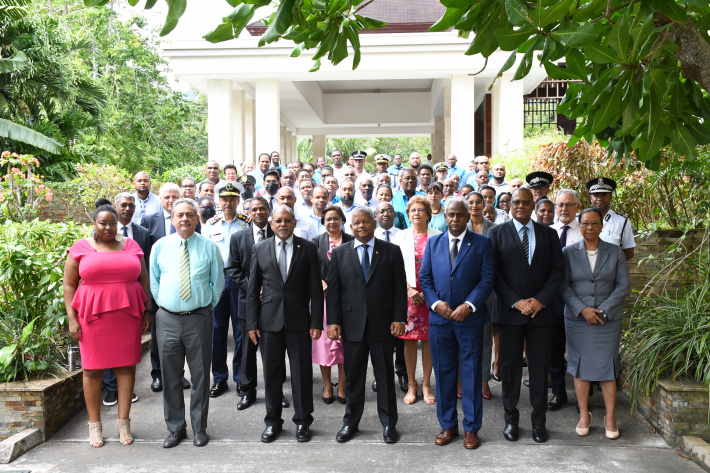 Guests and delegates in a souvenir photograph after the launch ceremony (Photo: Joena Meme)

How prepared is Seychelles to cope with an emergency?

A high-level workshop geared towards the operationalisation of a National Integrated Emergency Management Plan (NIEMP) was organised yesterday by the Disaster Risk Management Division (DRMD) in collaboration with the World Bank.

How prepared is Seychelles to cope with an emergency? Robert Ernesta, the director general of DRMD, explained that being a small island we need a coordinated response.

“Currently when there is an emergency, we come together and do what is necessary. Our reaction was not based on a proper plan. But if we have a plan with proper standard operating procedures, then we will do it in a coordinated way. We want to move towards preparation and mitigation.”

Mr Ernesta explained that “there is a confusion in the mind of people about NIEMP and they think that this is the totality of a plan that will keep Seychellois safe and secure in case of an emergency. The NIEMP sets out the major components on how to make other plans. NIEMP is the main instrument to help the organisations how to make their plan and include the community. Now each ministry and agencies have to make their own contingency plans”.

Mr Ernesta noted that yesterday they launched the process and now we all need to work on plans that will fall under the framework of NIEMP.

Keren Charles, the task team leader for this mission from the World Bank, commended the government of Seychelles for the “bold and pro-active steps” it has taken to address climate and hazard risks.

“With the development of the NIEMP, the DRMD has taken key steps but more work is needed. There need to be coordination and the teams need to work together to build resilience capacity within the Seychelles. Today with the President of the Republic and the vice-president and so many key ministers and agencies being here shows the national commitment in building resilience and that’s amazing to see. We are happy to work with Seychelles and continue the collaboration”, she said.

Ms Charles also shared that there will be a series of workshops with focal points and at the end of these we will be able to get feedback from them so that we can strengthen the trainings.

In his opening speech, the Minister for Internal Affairs, Errol Fonseka, stated that “disaster risk management has been a subject of contention in the past, not least in regards to its importance, but more so in where the responsibility lies in respect of the unit responding. Since its conception in late 2019, and its approval in early 2020, the NIEMP has been the conceptual driver behind the Covid-19 pandemic response, and the major land fill fire in September 2020. The NIEMP sets out the way forward for all stakeholders to develop their sectorial plans according to their functions as lead and support agencies in five functional areas. These are; Rescue and Security, Health, Humanitarian Services, Essential Infrastructure and Services and Emergency Management”.

Minister Fonseka added that these functions will have to be operationalised in order to meet the expectation of the government to lower disaster risks by implementing an effective collaborative approach to reduce effects of multi-hazard events.

“It aims to strengthen emergency preparedness for effective response at all levels and thus contribute to the Implementation of the Sendai Framework for Disaster Risk Reduction 2015-2030 Priority 4: Enhancing disaster preparedness for effective response and to ‘Build Back Better’ in recovery, rehabilitation and reconstruction. I would be failing if I miss this opportunity to reiterate the urgency of everyone needing to take a strong stance in risk reduction at the respective stations. The existential changes happening around the world, whether it be environmental or geographical imbalances, impacting security and safety urges us to review our national risks.”

The main focus of this World Bank technical assistance is on enhancing emergency coordination at ministries, departments and agencies (MDA) level and turning early warning into effective early actions.

The World Bank team comprises Paul Hayden, who was instrumental in producing the plan in 2019, and Darmen Ellayah, both senior disaster risk management consultants. Keren Charles is the task team leader for this mission.

DRMD will keep training disaster risk managers in the different ministries and organisations. Currently DRMD has only 13 staff and they are critically under-staffed. The director general is looking into the possibility to recruit more people in order to have a proper training programme for the ministries and agencies in the country.