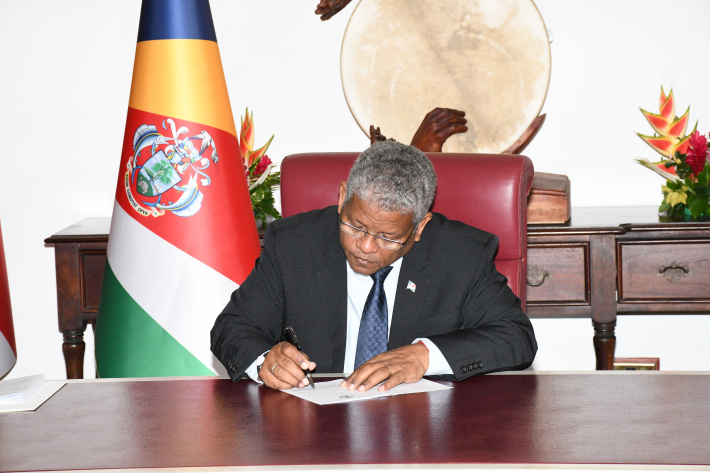 Law Commission Act 2022 to become operational as from next year

The purpose of this Act is to establish the Seychelles Law Commission which will be responsible for reviewing the laws of Seychelles with a view to proposing legislative amendments or new legislation to the government and the National Assembly.

The main tasks of the Commission will be: Law Reform; Law Revision; and Legislative Scrutiny.

Further, the Commission will be given the responsibility of compiling the Seychelles Law Reports.

“This law is very important and will come into effect next year. We recall the debates on this subject at the National Assembly but this law will lead us towards modernity. Many Commonwealth countries have come up with this principle and this Commission will have specific duties. They will also compile the judgements coming from the Supreme Court and the Court of Appeal,” the President explained.

Furthermore, President Ramkalawan shared that for the review of Civil Code and Child Protection, special committees were appointed. “This Law Commission will take all these responsibilities as they will follow what is happening in the Courts and even with the guidance of the Attorney General they will be able to make recommendations. The Commission will also fulfill another objective of the government which is to have public participation when a law is being passed. They will have therefore the responsibility to have public consultations and also with the National Assembly members. This will help our Legal System and our Judiciary to remain above everybody and that laws are not being made for only a group of people,” explained President Ramkalawan.

At any point is this Commission taking over the work of the National Assembly, clarified the President. “When a bill is being prepared, it has to be gazetted. Once this process is done, it becomes NA’s property. At this time, they do the first reading and then they do their work and debate on the bill. Role of the NA remains intact and the role of the Commission is to see if the bill goes against the Constitution or any other issues.”

About the work of the commission

The assent of this law was witnessed by the AG Ally and Judge Ranjan Perera in the presence of Vice-President Ahmed Afif, Chief Justice Rony Govinden, the leader of government business in the National Assembly, Bernard Georges.