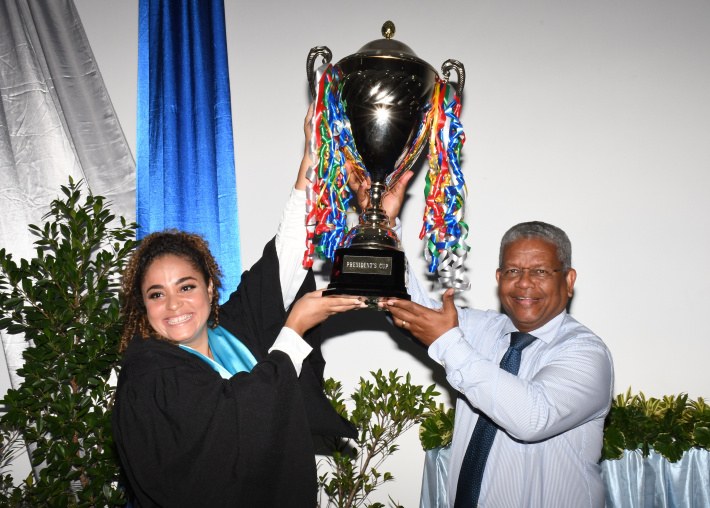 Mona Dodin won the prestigious President’s Cup (the outstanding student award) yesterday during the graduation ceremony for the 2021 cohort from the Seychelles Institute of Teacher Education (SITE).

The ceremony took place at the SITE auditorium, Mont Fleuri.

The newly graduated teacher, who followed a Diploma in Education - the Arts, was also awarded a laptop from the Office of the President, a certificate, a trophy from SITE, a government scholarship, a shield and various other prizes presented to her by President Wavel Ramkalawan.

The director of SITE, Luciana Lagrenade, stated that “it is important that you always remember that teaching is known and respected worldwide as a noble profession”.

She added that the there is a high level of responsibility on people like the new graduates as by opting for such a profession they would be imparting knowledge to demonstrate, teach and promote attitudes necessary for work and life.

The graduates were led by Mona Dodin through the charge and teacher’s pledge.

For the best performer awards, Ashley Esparon was awarded the SNYC Award – ‘Making the impossible possible’ – and he also won the best Male Student Award. He was presented with his award by the principal secretary for Educational Services, Merna Eulentin and Bernard Arnephy.

Kira Marcel who followed a Diploma in Education (Early Childhood) was awarded with the Seychelles Institute of Teacher Education Award presented to her by Mavis Lespoir, the deputy director for studies.

For Best Academic Performer in Diploma in Education (Early Childhood) the award went to Mifa Moncherry and her award was presented by the head of department (HOD) Lymiah Bibi.

Jerina Rath won the best academic performer in Diploma in Education (Primary) and was presented with her award by the HOD Dr Veronique Figaro.

The President’s Cup awardee, Mona Dodin, stated that she joined the field because she has a passion for teaching and for children.

She said she hopes that they progress in all domains and all aspects of their lives especially in terms of moral values.

The awardee highlighted that her vision is to aid in the development of the world and children in general on account of the many social issues affecting the population.

She further noted that she wants to help educate the children through what she has learned at SITE and help them move forward in life.