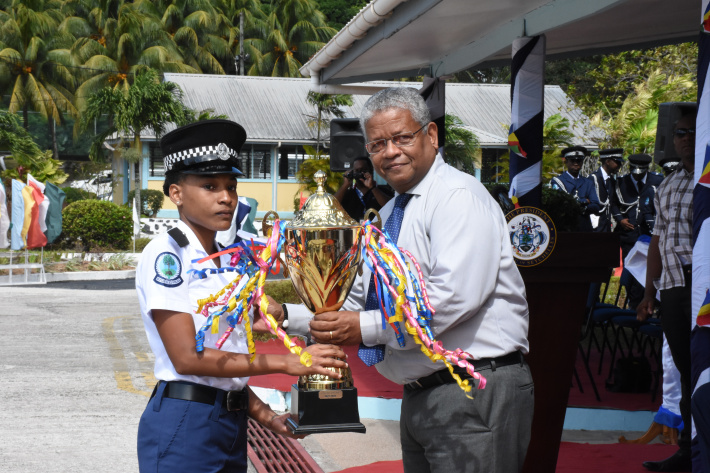 Cheryle Labrosse is the overall best performer of the certificate course in policing and she received her prize during yesterday’s graduation ceremony held at the Seychelles Police Academy, Pointe Larue.

The 25 police officers make up the first group of officers to graduate from the revised certificate in policing course specially designed by the police for the police.

Best overall performer Cheryle Labrosse was presented with the prestigious President’s Cup by President Ramkalawan and was also awarded a laptop, a 15-minute flight sponsored by Zil Air, nail paint design sponsored by ‘Day at the Spa’, one hour semi-sub cruise for two sponsored by Semi-Sub, R3,000 sponsored by H Savy Insurance, one full day marine park tour for one by Teddy’s Glass Bottom Boat, one month free gym subscription sponsored by Extreme Fitness and one gift bag sponsored by Absa bank.

Of the 25 police officers, 10 are from the public order and tactical response unit (POTRU) and they followed the basic policing course and the remaining 15 studied for a certificate in policing.

The most outstanding academic performer for the basic course for the Potru officers is Terrence Barbe, while the best performer in field training is Winsley Marie.

Other than best overall performer Cheryle Labrosse, the other awardees in the certificate course in policing are Rudy Pillay (most disciplined), and both Karine Derjacques and Shannon Morel (outstanding academic achievement).

President Ramkalawan thanked the many women present and said he was happy to note that many have taken up the vocation.

He added that under the direction of the commissioner of police and following the launch of the latest strategic plan, this group of officers aims at elevating the standard of the force.

President Ramkalawan congratulated the graduates and thanked those with high academic background for stepping forward to join the police force.

He further stated that currently there is a group of officers who are taking their job seriously, are disciplined and helping to restore confidence in the force, adding that the new graduates will play an important role in the development of the police force.

The president also announced that the police dogs that have undergone training in the United Arab Emirates (UAE) arrived in the country yesterday and will soon start to work.

He highlighted that the memorandum of understanding (MoU) signed with Kenya early this week will permit the police to have better facilities in forensics training and soon some officers might undergo training in Kenya to further enhance their knowledge.

Police commissioner Ted Barbe said: “First of all I would like to thank all of you lined up this afternoon for answering the call to undertake one of the most difficult, demanding and stressful careers in modern society. Take note that you make no mistake, for policing is a noble vocation.”

He added that he is certain the training the graduates received was intense, exhausting but of a very high standard in order to prepare them for the road ahead.

As for commandant Marie, he stated that “training is a vital part of policing and if we are to have protective police officers then we need to deliver quality training.”

He further added that in their quest to modernise and formalise the training institution, the Seychelles Police Academy has partnered with the Seychelles Qualifications Authority (SQA) to ensure that they achieve this objective. He highlighted that what is being witnessed today is the first fruit of this collaboration.

The ceremony ended with a parade march and the president interacting with the graduates. 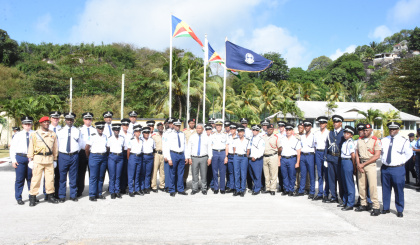 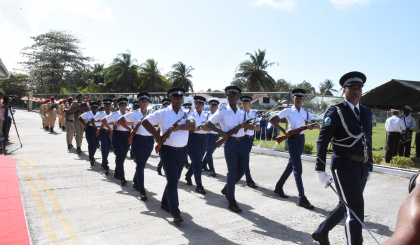 The ceremony ended with a parade march