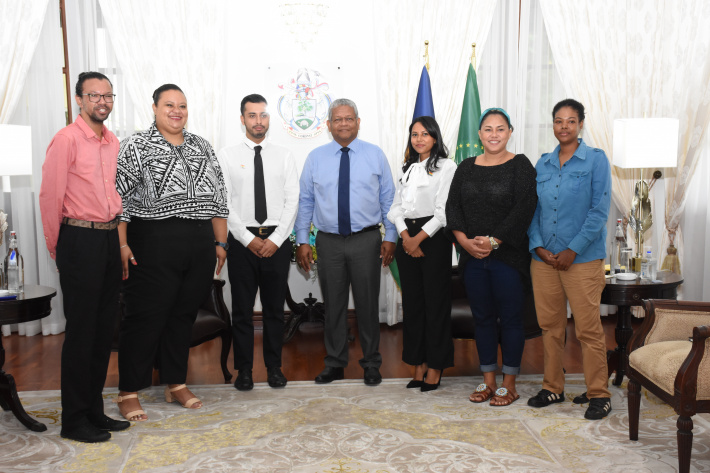 Members of the LGBTI in a souvenir photograph with President Ramkalawan. Absent is Hanifa Eugenie (Photo: Louis Toussaint)

The board members of non-governmental organization (NGO) LGBTI Sey, paid a visit to President Wavel Ramkalawan yesterday at State House.

The board comprises seven members, one of whom was absent at yesterday’s meeting with the president. The board is chaired by Naddy Vidot, with Emily Gonthier as vice-chair, Sasha Alis (secretary), Sanjoe Denousse (treasurer) and Sumi Joubert, Sylvie Ah-Time, Hanifa Eugenie (members).

Chairperson Vidot stated that “during this historic meeting with the president, we discussed the main things around our strategy which pertains to education, health and legal reform. In regards to education not just Ministry of Education but also a national education and national conversation because a lot of the issues we’re focusing on are human rights and human rights impacts not only the LGBTI community but also the wider community”.

The aim of the visit was to discuss legal reforms, education and healthcare in terms of equal access to services.

Ms Alis stated that it is not that there is a problem with human rights but more so to educate more on the subject so that everyone regardless of their sexual orientation (gender) is not marginalised or left behind.

The board discussed various key points with the president however the most important points discussed was recognition of same sex marriages, same sex couples rights to adopt as well as gender identification on IDs (identity cards).

She pointed out that the board and the president also talked about pupils who identify themselves as another gender, “How they are in school, how professors treat them…and we also touched on access to HIV treatment,” she said.

The president on his part, according to the secretary of the board, reacted positively and told the board that it all boils down to the law.

“He said we must inform ourselves on what the law says, to continue the work we are doing and to speak to partners and stakeholders to see if there really is an hindrance somewhere or if it is people who do not understand what the law allows or does not allow,” she said.

She also highlighted that potentially it is also people in the public service who may be do not know what the law states and that they need training to understand that they should not discriminate against an individual due to their sexual orientation.

For same sex marriages the board member noted that couples who have taken the step are seeking the recognition from the authority in Seychelles.

According to the board member when it comes down to adoption what is looked at is whether the couple is fit to adopt a child and the home or house is reviewed, where they will stay and how they will act towards the child.

“Your capability of becoming a good parent is not based on your sexual orientation; that is not relevant,” she highlighted. She added that they will have to have conversations that will lead to long term decisions, that it will take time and will require a lot of sensitisation.