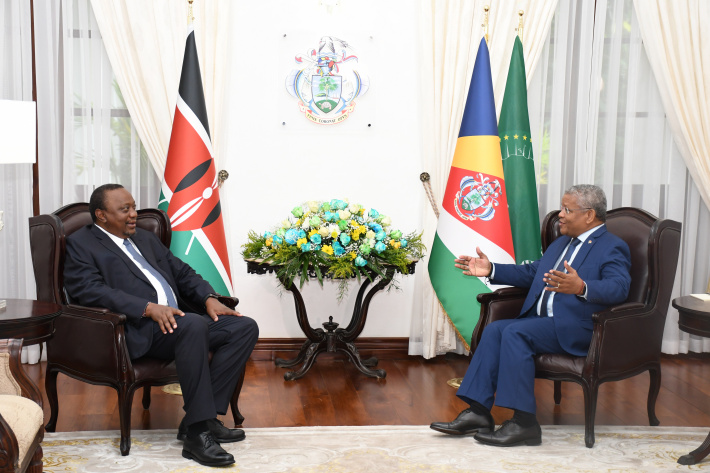 Seychelles and Kenya have signed ten legal instruments following bilateral talks at State House yesterday morning between the countries’ heads of state, President Wavel Ramkalawan and President Uhuru Kenyatta, who is on a three-day official state visit to Seychelles.

When addressing the guests, including the Kenyan delegation, Seychelles cabinet of ministers and members of the diplomatic corps, President Ramkalawan said he was honoured to welcome President Kenyatta to State House, and the meeting testifies to the importance the two countries place on their relations and it was also an opportunity to give it a new impetus.

President Ramkalawan described the talks as excellent, where he and his counterpart reminded each other on the bonds of history and personal friendship that unite the two peoples.

“We re-affirm the long-standing multi-faceted partnership between Seychelles and Kenya. We have substantial bilateral cooperation in fields such as education, health, trade, agriculture, civil aviation, as well as strong people-to-people ties, even before the establishment of diplomatic relations on January 10, 1990. Today we are strengthening these and of course by doing so we are strengthening other areas of cooperation,” said President Ramkalawan.

He also expressed his gratitude to President Kenyatta for the assistance provided by the 50 Kenyan workers who were recruited by the Ministry of Health in March 2020 following the outbreak of the Covid-19 pandemic, the work of the Kenyan land surveyors here, and the contribution of Kenyan teachers to the country’s education system. There are presently 65 Kenyan teachers teaching in primary and secondary schools, and another nine Kenyan lecturers working in tertiary institutions in Seychelles.

The two heads of state also talked about the challenges the two countries face in their fights against drug trafficking and maritime security.

“As regional partners and African leaders, it is our duty and in our mutual interest to work together on these issues,” said President Ramkalawan.

He added that Seychelles and Kenya have also agreed to enhance their relationship and collaborate in the international arena on issues related to climate change and the development of a Vulnerability Index that he said will properly reflect the vulnerabilities of small island developing states like Seychelles.

They also discussed ways in which they can strengthen cooperation in the areas of trade and investment.

When answering Seychelles NATION’s question as to how soon these cooperations could be implemented, President Ramkalawan said this will depend on how energised everybody is to turn these MoUs into action.

He made a special appeal to the private sector to come on board to make sure they get implemented immediately.

For his part President Kenyatta described the discussions as fruitful and which he said will go a long way to solidify their bilateral relations.

He thanked and commended the joint cooperation committee that prepared the agreements that he said would outline new avenues for cooperation, and where the two countries could maximise and move together as they seek to strengthen their existing ties.

He said the signing of the agreements and MoUs will give the two countries a chance “to explore new grounds in our diplomatic as well as our social economic engagements and opportunities that our two nations could partner in pursuit of our shared interest in social economic development of our people, prosperity for our nations and people as well”.

Other than trade, diplomatic cooperation, tourism, yesterday’s talks also focused on the re-establishment of sea routes and links between Seychelles and Kenya, how to further cooperate on matters of peace, security, especially with regard to maritime security, as well as the blue economy.

“We all know that Seychelles is the leading champion of the blue economy and we have in that regard agreed to strengthen our collaboration in protecting but also in ensuring sustainable utilisation of our ocean resources for the benefit of our two nations and our two peoples,” said President Kenyatta.

He added that he and his counterpart also share the belief that Africa has the potential and the know-how to forge a much better future for the people especially the young people.

“That is why Seychelles and Kenya are employing a multi-faceted approach to maximise on our potentials as well as to address challenges that our citizens face.”

When answering Seychelles NATION’s question as to whether the two regional neighbours could have tapped into more sectors and maximise the use of the agreements of cooperation, President Kenyatta said that more could have been done in the area of trade.

“We could have done more and I’m sure going into the future, with the expanding agreements that we have put in place, and as we’ve said with President Ramkalawan, what we need to do is make certain that we firmly push those who have been mandated to implement these MoUs and these agreements to ensure they are actually moved from paper to action that benefits the people. I think I see that commitment from the president and his government and I want to assure you the same level of commitment is from me and the government I am heading and I am convinced that even the next government that comes into play will continue,” he concluded.

It should be noted that the two heads of state had a brief tête-à-tête prior to holding bilateral talks and President Kenyatta also signed the visitor’s book.

Following his visit to State House, the Kenyan president hosted a luncheon for his Seychelles counterpart and his cabinet of ministers on board the Kenyan frigate ENS KNS Jasiri.

President Uhuru Kenyatta is the Fourth President of the Republic of Kenya and he is serving his second and final term which ends in August this year.

His presidency has been underpinned by a commitment to economic and social transformation, national unity, good governance, regional integration, and intra-Africa trade. 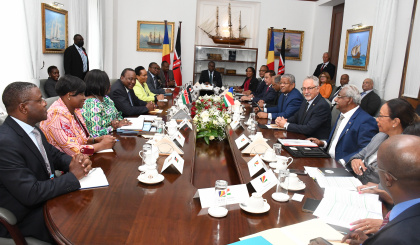 The bilateral meeting between the two delegations 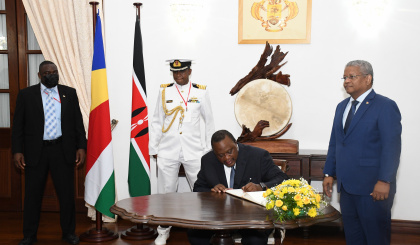 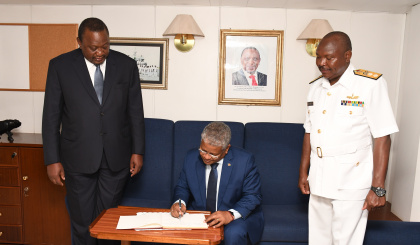 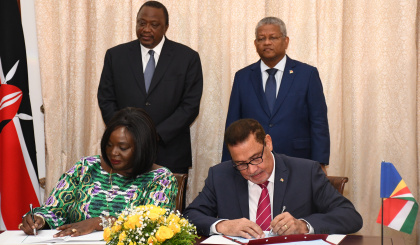