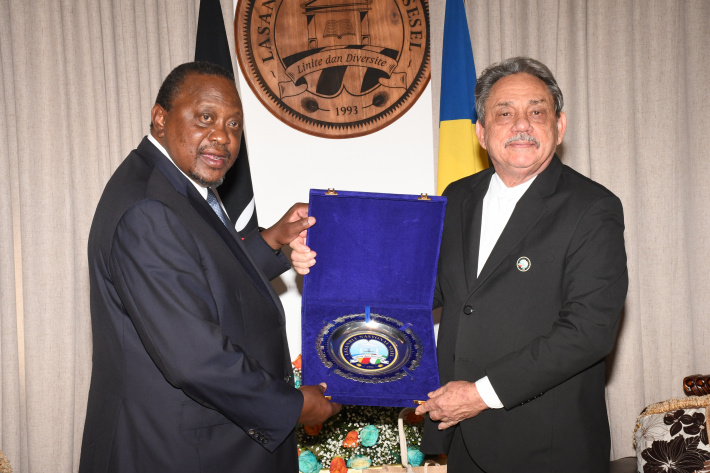 Members of the National Assembly, as representatives of the people, occupy a very important place in our independent and democratic societies, Kenyan President Uhuru Kenyatta has said.

Presently on a three-day state visit in the country, President Kenyatta made the statement yesterday before the National Assembly during an extraordinary sitting where he reminded parliamentarians that as lawmakers they have a sovereign duty to ensure that we have a legal framework that upholds the fundamental rights and freedom of our people, and ensure equity, justice for all, while promoting the rule of law.

He said as custodians of public resources, members of the National Assembly (MNA) should ensure that the country’s resources are effectively deployed and utilised, adding that through these measures, and by holding the executive to account, the legislature plays a central role in shepherding national development.

President Kenyatta said over the short period, since gaining independence in 1976, Seychelles has evolved into a maturing democracy and built one of the strongest and most vibrant economies on the African continent, and that in spite of its relatively small size, Seychelles has become a regional leader, especially on matters regarding the blue economy.

He said both Seychelles and Kenya have established open democratic states, with vibrant multi-party democracies, and that with the coming presidential election next month, Kenya is looking forward to a peaceful transition of power, similar to what happened in Seychelles in 2020.

He, however, noted that it is important to note that we across the continent are noting with concern the recent increase in unconstitutional change of power in a number of African countries, and we therefore need effective parliaments to protect the constitution and show by example that democratic governance does indeed deliver more effectively for the people.

President Kenyatta explained that our parliaments also have the critical role of promoting African integration, and cognisant of this important role, the assembly of heads of state and government set up the Pan-African parliament, based in South Africa, while respective national assemblies are looked upon to enact laws that promote intra-Africa trade and investment.

He said they are also looking forward to the Pan-African parliament to support the promotion of model laws across the continent.

This, he said, will make it easier for our people and businesses to operate across the continent.

Regarding the Covid-19 pandemic, President Kenyatta noted that it has caused major disruption in our lives and our economies in the last two years, and he commended the people and government of Seychelles for their resilience in dealing with the pandemic by taking measures to curb the spread of the virus to protect its citizens.

As for the Russia-Ukraine war coming even before we had recovered from the pandemic, placing additional economic stress to the world economy, President Kenyatta said these global crises are teaching us that we need to be self-sufficient.

“Africa can no longer afford to rely solely on outsiders to address our common challenges, therefore, just like we did with the Covid-19 pandemic we need to work together to create opportunities out of this crisis,” he said, adding that we need to build local capacities to address needs that are specific to Africa, strengthen intra-Africa trade and establish new regional markets for our goods and services.

He urged the parliament to be proactive in supporting government to implement laws that support this move towards greater self-sufficiency.

President Kenyatta also noted that Africa continues to suffer significant adverse effects of climate change and that island states such as Seychelles are disproportionately affected by the issue.

This, he said, calls for bold climate action plans, and we need parliament to enact laws that support the shift towards a greener and sustainable future.

“I am pleased to note that Kenya and Seychelles are at the vanguard in protecting the ocean and marine resources, and we look forward to strengthening collaboration in this area following my visit to your beautiful country,” he said, adding that he appreciates the government of Seychelles for embracing the blue economy through the Blue Economy roadmap.

This, President Kenyatta said, has earned Seychelles the ‘African champion of the Blue economy’ title, while Seychelles has also done exceedingly well in the protection of its exclusive economic zone by achieving more than 10 percent which is a fulfilment of the United Nations sustainable development goal 14.5.

He lauded Seychelles for setting up a regional mechanism for ensuring safety and security at sea, adding that Kenya is keen to cooperate with Seychelles on maritime security.

“I thank the government of Seychelles for the support it is providing to the Kenya Coast Guard,” noted President Kenyatta who added that an enhanced partnership between our two countries’ expertise will boost efforts by Kenya and the region in sustainable utilisation of ocean resources.

He also talked on the longstanding relations between the two countries over the years, notably in the health and education sectors.

“I look forward to deepening the scope of our relations in other key sectors of the economy such as agriculture, and I am confident that Seychelles can benefit from the experience and technical capabilities of Kenya in pursuit of food security,” he concluded.

Addressing the house, leader of the opposition, Hon. Pillay, expressed his gratitude for the bond shared between the two countries, adding that it goes beyond diplomacy and fraternity, and that it is a bond of one people and of a united Africa. A bond which, he said, sees Africa moving forward.

Hon. Pillay urged President Kenyatta to use the influence he bears to carry the voice of Africa much further, since we need leaders who are prepared to stand by the values that make us who we are and represent what is most important to us all, ensuring that all people benefit, while moving the context of Africa from being a continent that is seen to be poor to an economic force.

On his part, leader of government business, Hon. Georges, said the National Assembly is pleased to have been graced by the presence of President Kenyatta, especially at a juncture when the members on both sides of the chamber are taking on new responsibilities in terms of the Pan-African parliament and our respective countries are gearing up to the challenges of regional and continent-wide trade following the signature of the AfCFTA.

He thanked President Kenyatta for his kind weighty-word address which he said has challenged the National Assembly to take the lead in many areas. 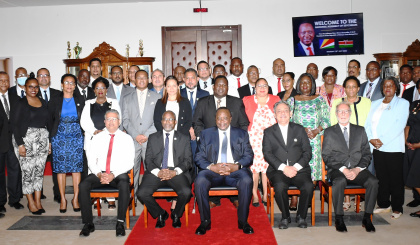 President Kenyatta in a souvenir photograph with the National Assembly family 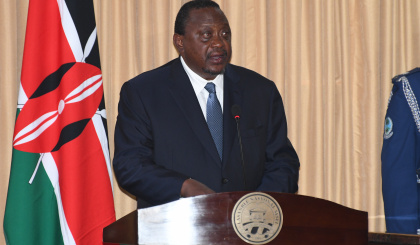 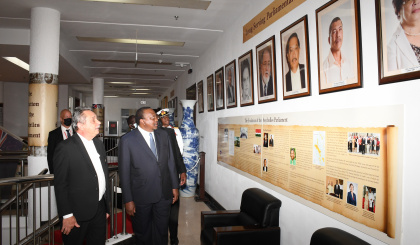