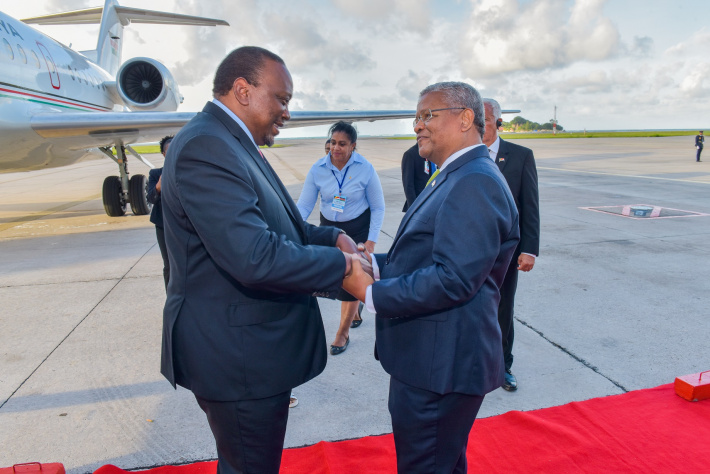 Kenyan President Uhuru Kenyatta is in the country on a three-day official State visit at the invitation of President Wavel Ramkalawan.

President Kenyatta, who is accompanied by a high level delegation, arrived at the Seychelles International Airport yesterday afternoon onboard the Kenyan Presidential plane from Nairobi. The Kenyan President, who was given full military honours on his arrival as he stepped on the red carpet, was received by President Ramkalawan and presented with a bouquet of flowers by 8-year-old Nael Nanon from Pointe Larue primary school.

The two presidents then stepped on the apron for the general salute while the military band played the national anthems of Seychelles and Kenya.

After the apron ceremonial welcome, President Kenyatta inspected a Guard of Honour.

He left the airport amid cheers from a group of flag raising students from the Plaisance secondary school.

In a short interview given at the touchdown of the Kenyan Presidential plane, the Seychelles Minister for Foreign Affairs and Tourism, Sylvestre Radegonde, said that since former President Danny Faure made a State visit to Kenya in 2017, it was rightly so important in diplomacy that state invitation is reciprocated.

He added that he hoped the visit will further strengthen the cooperation and long-standing relationship between Seychelles and Kenya, regardless of a change in government in the upcoming Presidential election in Kenya.

President Kenyatta and President Ramkalawan will be holding a tête à tête this morning at State House, including a bilateral discussion and signing of a number of agreements ensuring cooperation in different domains between the two states.

He will also address members of the National Assembly in the afternoon followed by a visit and tree planting at the Botanical Garden.

Tomorrow President Kenyatta will have the honour to visit the Unesco heritage site of Vallée de Mai on Praslin, before his departure.

His arrival in the country yesterday was beamed live on Seychelles Broadcasting Cooperation (SBC) and TeleSesel television stations.

President Ramkalawan invited President Kenyatta for the official visit to our country during a bilateral talk on the sidelines of the African Union (AU) summit for heads of state and government held in Addis Ababa, Ethiopia in February this year.

President Kenyatta is the fourth President of the Republic of Kenya. He has previously served as member of parliament, leader of the opposition, Minister for Local Government and deputy Prime Minister and Minister for Finance.

President Kenyatta was re-elected for a second and final term in August 2017. His presidency has been underpinned by a commitment to economic and social transformation, national unity, good governance, regional integration, and intra-Africa trade.

Under President Kenyatta’s leadership, Kenya has consolidated its position as a leader on climate change, the Blue Economy and digital technologies and Nairobi has emerged as a regional hub for major international organisations and corporations.

In January 2021, Kenya started its two-year term as a non-permanent member of the United Nations Security Council.

Following the promulgation of a new Constitution in 2010, President Kenyatta presided over the rolling out of an ambitious programme to restructure the Kenyan state involving large-scale political, fiscal, and administrative decentralisation.

At the regional level, President Kenyatta has championed regional integration, intra-Africa trade and a stronger role of the African continent on the global stage. He has been at the forefront in promoting peace and security efforts in the region.

He is also the current President-in-Office of the Organisation of the African, Caribbean and Pacific States (OACPS) which comprises 79 African, Caribbean, and Pacific states. President Kenyatta is a member of the High-Level Panel for Sustainable Ocean Economy, a unique initiative of 14 serving world leaders to build momentum towards a sustainable ocean economy.

President Kenyatta serves as a Global Leader for the Young People’s Agenda under the UN-led Generation Unlimited Initiative (GenU) which seeks to ensure that by 2030 all young persons aged 10-24 are in school, in training or employment.

In July 2022, President Kenyatta was inaugurated as the Global Champion for the Africa Adaptation Acceleration Programme (AAAP), an initiative of the African Development Bank (AfDB) and the Global Centre on Adaptation (GCA) whose objective is to raise 25 billion US dollars for investment in Africa’s climate adaptation initiatives.

The accompanying photos show some highlights of President Kenyatta’s arrival at the Seychelles International Airport yesterday. 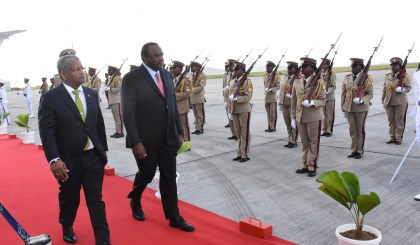 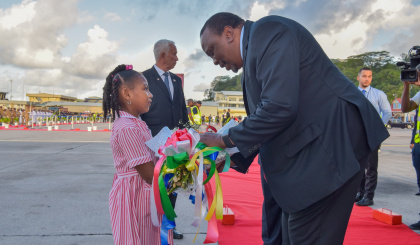 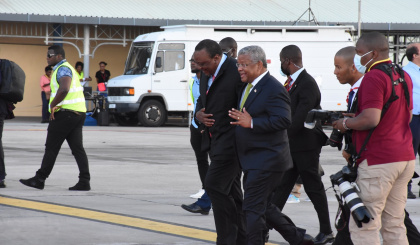 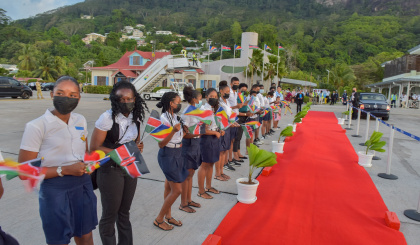 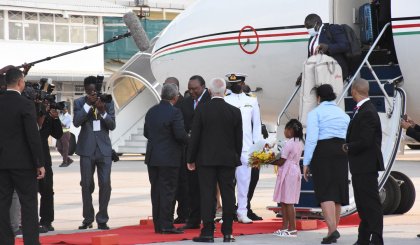 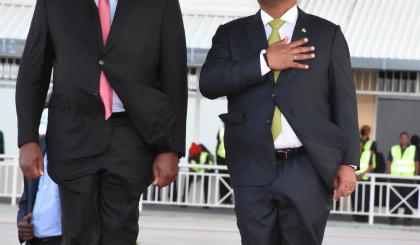 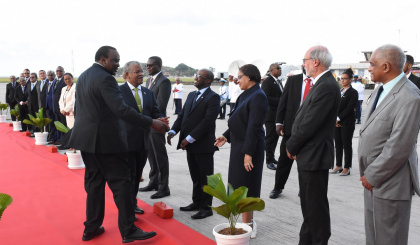 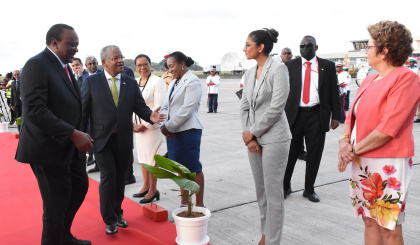