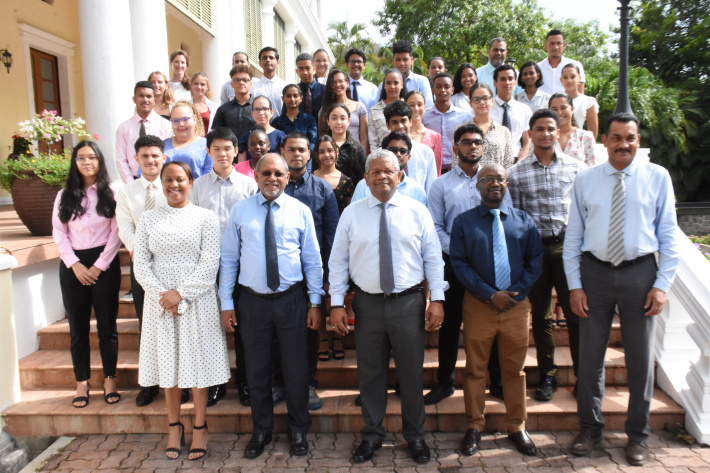 The students in a souvenir photograph with President Ramkalawan and other guests (Photo: Joena Meme)

The 36 outstanding Cambridge Learner Awards recipients for 2021, from the public and private schools, were honoured for their excellent achievements by President Wavel Ramkalawan and Vice-President Ahmed Afif in a small ceremony yesterday morning at State House.

Also present were the Minister for Education, Dr Justin Valentin, principal secretaries and other representatives from the ministry and from the different schools the students hail from.

Addressing the students, President Ramkalawan congratulated them on their achievements, saying he was very impressed with their results taking into account that they had to conduct their learning and sit for their examination at the height of Covid-19.

He advised the students to, while on overseas studies, make the most of their time so that when they come back they will be part of a new culture to raise standards in the country to another level.

Nonetheless, he said he was happy to note the number of young people who are already playing a significant role to transform our society such as in the environment.

The President stated that there’s no better place than the seat of power and authority, State House, which belongs to the people, to acknowledge and congratulate Seychellois and Seychelloises who have done well.

He said he will be expecting to welcome them back again in the same place when they finish their overseas studies.

He added that the government has plans to look for job placements for overseas students even before they arrive back in the country. He said that the job placements will be done in consultation with the student.

He stated that it is not normal for someone who has been sent on a scholarship by government to come back and look for the job that he or she had been sent for training by the same government.

President Ramkalawan wished the best of luck to all students going for overseas training and those who will be continuing with their studies locally.

He called on them to concentrate on their studies and not to get distracted or be led to where they would not want to be led among other peer pressure that could destroy them.

To show his appreciation for their achievements, President Ramkalawan presented each of the students with a Seychelles flag.

Minister Valentin, who introduced the students to President Ramkalawan, Vice- President Afif and the other invitees, said that they deserved to be hosted by the President and Vice-President in the highest office of the land as they are the ambassadors of quality education and ambassadors of hard work.

He urged students aiming to do their IGCSE and A-Level exams this year to use the current group of Cambridge high achievers as their inspiration to score even better results.

He said that the Ministry of Education would like teachers to give the best possible deal for students as they want students to score ‘A’s and ‘B’s which is not possible in core examinations in which C is the highest grade one can get.

He also called on all other students to continue to do well in their studies to make themselves and their community at large proud and happy.

He added that other students doing well in other local and international exams will also have their chance to be hosted by President Ramkalawan.

On behalf of the students, Turissa Sullivan from Independent School thanked President Ramkalawan for welcoming and honouring them at State House.

She added that for them to be honoured by the President and the distinguished guests bear testimony that hard work pays off.

She is aspiring to secure a career in either finances, accounting or economics. As an award recipient for Business, Cambridge International AS Level, Ms Sullivan was among three students who were awarded among the top ten in the world for IGCSE. The other two are Rahul Rajesh for English as a Second Language (Speaking endorse) from Independent School and Sylvius Laporte for Art and Design, Cambridge International A Level from Seychelles Institute of Art and Design.