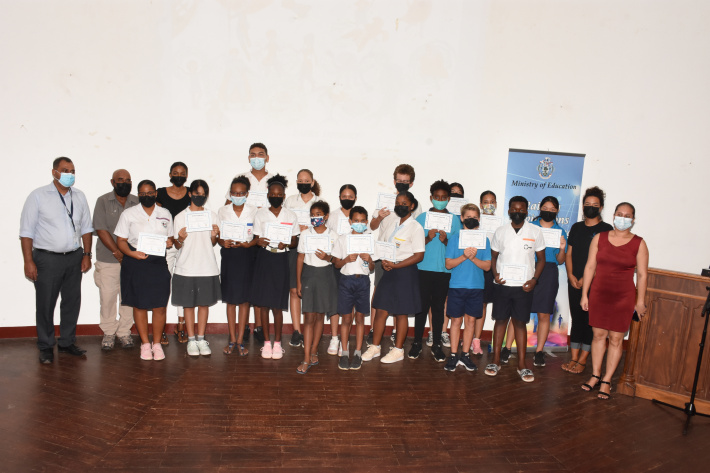 The students in a souvenir photograph with guests during Friday’s ceremony (Photo: Louis Toussaint)

Seventeen students have been selected by the Save our Seas Foundation and the Ministry of Education to go on a trip to D’Arros Island.

In a ceremony held on Friday afternoon at the auditorium of the Seychelles Institute of Teacher Education, Mont Fleuri, they received their documents to go on the trip from Terrence Vel and Ellie Moulinie from the Save our Seas Foundation (SOSF).

The students aged from 11 to 14 years were selected after winning a drawing competition which was launched in September 2021, in which they had to draw a superhero capturing three topics about the environment – that is climate change, over fishing and marine pollution.

There were around 85 entries, which was shortlisted to 25 after the first round for the final judging.

Shania Talma, one of the judges, said that the competition was very tight among the students.

Among the 17 students selected one student will not be going this year, but will go next year with another group. For this trip from August 8 to 22, the remaining 16 students will be divided into two groups. The first group will leave on August 8 for one week on the island and the second group will follow soon after.

During the trip the students will participate in some of the long-term projects that are being done on the island such as monitoring turtles, juvenile sharks and reef manta rays, among others.

After the ceremony, the students were briefed on the trip.

The aim of this competition was to engage young Seychellois on the importance of the ecosystems that form part of their national heritage while providing practical, hands on field experience in a globally important ecological hotspot.

The ceremony was attended by the director general for allied education services, Cyril Pillay; ambassador of the SOSF and its staff; students; teachers and parents. The activity for the students started in 2013 and it was stopped for a while.