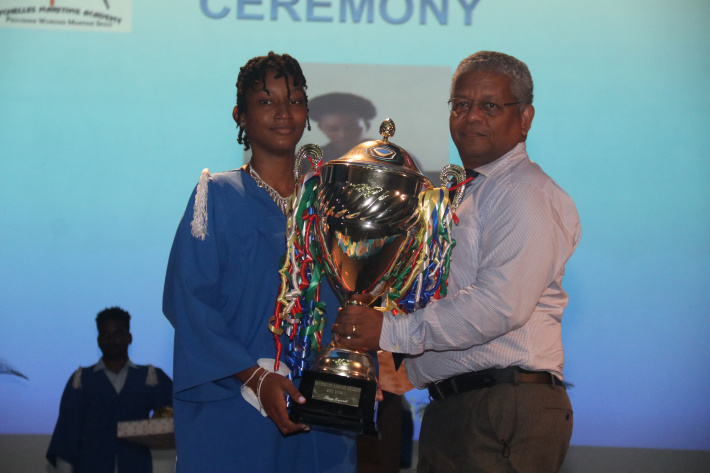 Hansa Freminot from the Seychelles Maritime Academy (SMA) clinched the prestigious President’s Cup at the academy’s graduation ceremony held on Friday at the University of Seychelles’ auditorium, Anse Royale.

Present for the ceremony were President Wavel Ramkalawan; the Designated Minister and also the Minister for Fisheries and Blue Economy, Jean-François Ferrari; the Minister for Education Dr Justin Valentin; the director of SMA, Captain Anura Herath; among other dignitaries.

Captain Herath stated that the auspicious day is due to the hard work and resilience of all the graduates. “Today is the day for learners to be acknowledged and celebrated for their abilities and skills of proficiency they have acquired throughout their days in the classroom, academically and workplaces, practicality in their learning process,” he said.

Hansa Freminot from the biggest cohort in Certificate in Fishing Technology (Apprenticeship) was presented with the prestigious President’s Cup by President Wavel Ramkalawan.

The President’s Cup awardee should display and meet various criteria which include scoring above average, display positive attributes, proven to be reliable, committed and respectful. The awardee must also have been involved in the advancement of the academy’s development and the community as well as must have exemplary attitude and courtesy.

The best performers in each category were awarded a shield and a certificate each.

The Best performer in Certificate in Fishing Technology (Apprenticeship) was awarded to Marcus Freminot, who was presented with his shield and a certificate by Captain Herath and Jessy Roseline, human resource manager at the Seychelles Fishing Authority (SFA).

Best performer in Advanced Certificate in Fisheries Science was awarded to Julie Gedeon who received a shield, certificate, gift voucher and cash prizes presented by the captain and a representative from Teddy’s glass bottom boat.

Yves Micock was the best performer for Advanced Certificate in Nautical Science and was awarded with a shield, a certificate, a laptop, a gift voucher, one parallel ruler, chart and divider and cash prizes presented by Sarah Romain, the acting chief executive of Seypec, and Captain Herath.

The best performer in Advanced Certificate in Marine Mechanics went to Ravy Mathiot who was awarded a shield, certificate, laptop, a tool box and cash prizes presented by a representative from Cascade Slipway and Captain Herath.

Lynden Gomme is a learner who displayed tremendous effort in his particular programme of studies and was also awarded a shield, certificate and other prizes by the Minister for Youth, Sports and Family, Marie-Celine Zialor and Captain Herath for ‘making the impossible possible’.

Captain Herath noted that as graduates of SMA the former students will be recognised in the world of work in their respective fields as professionals and reliable individuals.

“We know the emphasis and amount of discipline we give at the academy was not always easy for you,” he said.

He highlighted that assuredly the graduates will appreciate the discipline at their future work places. 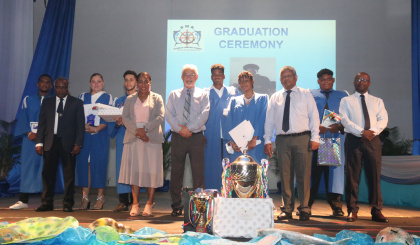 The best performers in a souvenir photograph with guests (Photo: Thomas Meriton)