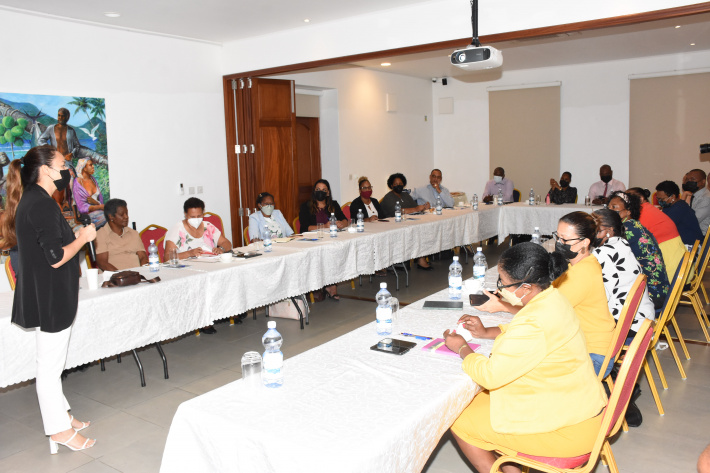 The Committee on Communicable Diseases, HIV/Aids and Sexual Reproductive Health and Rights (SRHR) of the National Assembly yesterday organised a round table discussion to engage, influence and advocate on policy change on access to Sexual Reproductive Health Services by young women and girls including safe abortion in Seychelles in a bid to reduce the number of teenage pregnancies.

The half-day round table discussion held yesterday morning at the National Museum conference room   with different stakeholders, including from the Ministry of Health and the social department, was part of the committee’s consultative sessions to gather enough information and knowledge for the formalisation of a motion before the National Assembly on access to Sexual Reproductive Health Services by young girls under 18 years of age in a bid to reduce teenage pregnancies and abortions among the group.

The discussion under the theme ‘Advocacy for women and girls to access SRH Services, including safe abortion in Seychelles’, was organised by the committee in collaboration with the Nurses Association of the Republic of Seychelles (Nars), the Alliance of Aids and Sexual and Reproductive Rights of Southern Africa (Arasa) and the Southern African Development Community (SADC).

After introductory remarks by the committee’s chairperson, Honourable Rosie Bistoquet, there were presentations on the prevalence of teenage pregnancy and the barriers associated with or denial of access to Sexual Reproductive Health on the health of young people including safe abortions and on women, teenagers for approved Termination Of Pregnancy(TOP) versus those with complications of unsafe abortions, including the procedures of application and management of surgical TOPs among other related issues from Health representatives and the socio-economic impact and challenges of teenage mothers on the social department by its representatives.

The presentations which included statistics were followed by a plenary session in which, apart from access to Sexual Reproductive Health services, ‘Education’ was derived as key to also combat teenage pregnancies.

Honourable Francois Adelaide, a member of the committee, said that the consultative sessions were necessary to help the committee draft the motion which will help address the issue of access to Sexual Reproductive Health Services by teenage girls.

It has been found that in Seychelles young people face a number of obstacles accessing sexual and reproductive health services due to various barriers. These barriers relate to availability and accessibility as well as the quality of the services provided. For example, laws and policies may limit young people’s access to services and contraceptives, and health centres may only address some needs of married women but not all. Due to their age, young people’s ability to make decisions or express an opinion may not be respected. All these make it difficult, and often prevent young people from accessing sexual and reproductive health services.

In a recent report conducted in Seychelles on Sexual Reproductive Health by the WHO in 2019, the findings show that the contraceptive prevalence rate (CPR), has been dropping over the past few years. This may have an effect on the ability of couples to practice family planning and prevent unwanted pregnancies. It is against the law to provide contraceptives to minors (<18 years of age) unless consent is given by the parents or the guardians.

The rate of teenage pregnancies in the country has increased steadily over the years despite the inclusion of sexuality education in the school curriculum under the Personal, Social and Citizenship Education (PSE) programme. Information from the National Bureau of Statistics and Civil Status shows that from 2015 to June 2020, 24 girls under 15 years old had given birth, and in the same period (2015 to June 2020), 1,120 girls/women aged 15 to 19 years old, had given birth. The findings show that 27% of teenage pregnancies end up in abortions. Our country is rated the highest abortion rate in the SADC region, especially among women of reproductive age, with 22% to 26% of all pregnancies ending in abortion. While teenage pregnancy between 12 - 19 years has remained around 13% over the past 5 years, the mean age of first pregnancy among teenagers is 15 years.

A participant, Honourable Sylvianne Lemiel, member of the Women Caucus in the National Assembly, said she was shocked to learn that based on the statistics, underage pregnancy was still on the increase in the country.

She noted that something has to be done to mitigate the situation and for that to happen all stakeholders should work together to address the issue taking into account all the promotion and prevention baggage made available by the Ministry of Health to work with.