The Air Navigation Services of the Seychelles Civil Aviation Authority (SCAA) has upgraded its data and voice recording system.

The Seychelles International Airport and Praslin domestic airport are now equipped with a state-of-the-art system to record any communications, both voice and data from the air traffic control units for investigation and training purposes.

This was done in accordance with the Seychelles Technical Standard for Communication, Navigation and/or Surveillance (STS CNS) to provide the legal recording of communication between Air Traffic Control Officers and aircraft, other controllers, and external agencies. It includes radio communications, telephone communication and ambient recording.

SCAA’s Communications, Navigation and Surveillance’ engineer, Balamurugan Mudaliar, who is the manager for this project, explained that there is a requirement that all communications to Air Traffic Control are legally recorded.

“Initially we had two voice recorders and a data recorder. Two are being used at the international airport since 2012 and the other one at Praslin domestic airport since 2008. The current recorders have limitations with synchronization and playback of both voice and data.”

Hence, SCAA had to replace its current system with the integrated voice and data recorder, to improve efficiency and automation in ATC recording facilities. The recorder on Praslin could not be accessed remotely whereas the new system can play back both locally and remotely and provides archive data recording for up to three months. 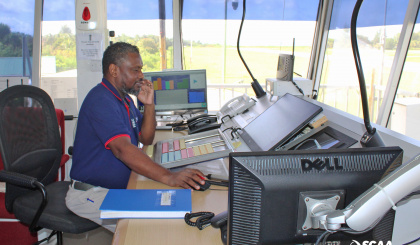