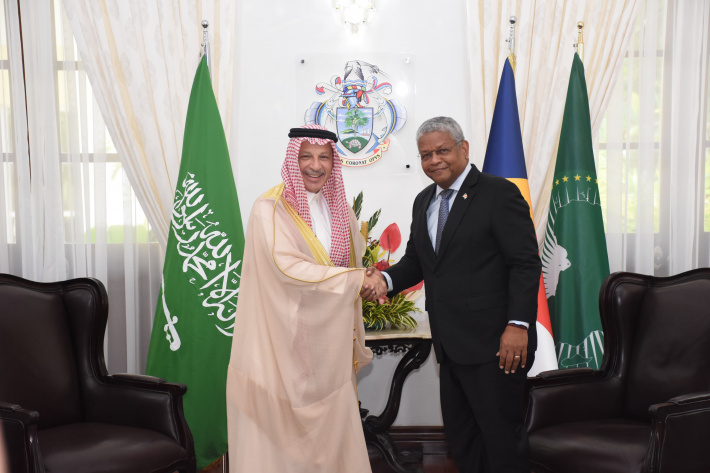 The Saudi Minister delivered a special message from His Majesty King Salman bin Abdulaziz Al Saud to President Wavel Ramkalawan. The city of Riyadh has put forward its candidature to host World Expo 2030.

It was also an opportunity for President Ramkalawan and the Minister for Foreign Affairs, Sylvestre Radegonde, who accompanied Minister Kattan, to review various areas of cooperation, discuss different projects as well as explore ways to increase the number of Saudi visitors here to help Seychelles in its effort to diversify its tourism markets.

Minister Radegonde remarked that even though cooperation between Saudi Arabia and Seychelles dates several years, it is not as active as Seychelles would have wished.

He went on to say that many projects discussed previously and submitted to the Saudi government for funding are still pending and their meeting was an opportunity to put these on the table once again.

Minister Radegonde said before Minister Kattan’s visit, he had already planned an official visit to Saudi Arabia to take place this weekend at the invitation of his Saudi counterpart.

Meanwhile Minister Radegonde said during the visit he also plans to sign two agreements with the Saudi government, namely a general cooperation agreement and an agreement on tourism cooperation.

“We will discuss tourism as Saudi Arabia remains a very lucrative market for Seychelles but not only in this context but also as a possible alternative market if anything happens on our current traditional markets,” Minister Radegonde said.

He added that several activities including workshops, a general press conference with all tourism trade partners, tour operators have been planned in Saudi Arabia which will be taken care of by Bernadette Willemin, the director-general for destination marketing in the tourism department.

“We want to sell Seychelles in a big way in Saudi Arabia,” Minister Radegonde said.

Minister Radegonde further added that he will also hold talks with Flynas, a Saudi airline which has expressed the desire to fly to Seychelles.

“We hope to be able to agree on a date for them to start direct flights to Seychelles. I will also be holding talks with Saudia, the flag carrier of Saudi Arabia, to explore the possibility and entice them to fly to Seychelles,” Minister Radegonde stated.

For her part Lindy Ernesta, the director-general of bilateral affairs in the department of Foreign Affairs, added that the talks Minister Radegonde is expected to hold and the agreements he is expected to sign during his visit namely the general cooperation agreement is expected to boost cooperation in different areas like education, investments, training among others.

“We need to do more to increase our ongoing cooperation with Saudi Arabia. For instance we have started talks on a visa waiver agreement with Saudi Arabia since last year and but to date we are still waiting for a response from the Saudi’s side as to whether we could sign the agreement. We are hoping that Minister Radegonde will resume talks on the matter to allow for a final and fruitful conclusion,” Ms Ernesta said.

She added that other projects on which discussions have started and which have already been submitted to be funded by Saudi Arabia include the reconstruction of La Digue school among others. 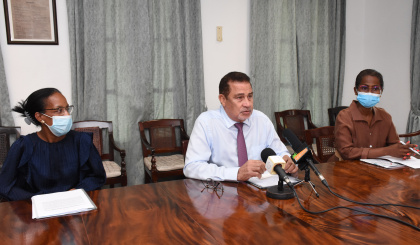