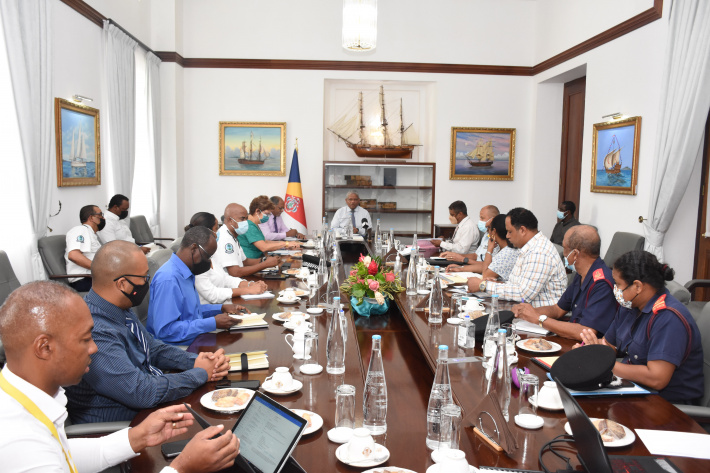 It has been agreed that people who construct over rivers will bear the responsibility to clean underneath their infrastructure while people who throw rubbish in the river will be handed down heavy fines.

This agreement came out during the high level committee’s meeting for a flood free Victoria which took place yesterday morning at State House.

The meeting yesterday was for the committee, chaired by President Wavel Ramkalawan, to discuss progress of works on the proposed remedial measures to mitigate flooding in Victoria and also at Mont Fleuri.

It was the third meeting of the committee set up to address flooding issues in Victoria and at Mont Fleuri following flooding caused by heavy rain in early March.

During their discussion, the different stakeholders were able to share the different works that have been done over the past month and a half following their second meeting in terms of cleaning of drainages and waterways and the removal of some of the unused modems and infrastructure by services utilities which were acting as barriers and preventing the flow of water.

One of the major works to be done is the de-silting of six rivers ‒ La Poudrière river which flows next to Cable & Wireless, the St Louis river which passes next to Victoria Gymnasium, the Maintry river that flows next to Camion Hall, Moosa River that passes next to the Happy Youth Club, Rochon river that flows near the Mont Fleuri police station and Quebec river which flows near the Mont Fleuri primary school.Work to improve water flows in the four water channels in Victoria and the two at Mont Fleuri are anticipated to take place during the month of June and that will be followed by embankment works etc…

Following flooding issues at Pointe Larue from last weekend’s heavy rainfall, the committee also went outside their scope to discuss the challenges that exist and also look at some directions and measures that could be taken to address flooding in the area for the long term.

They also agreed on imposing heavy fixed penalties on people who throw rubbish into rivers around the country. It was found that the flooding that occurred in Victoria and Mont Fleuri was as a result of rubbish that had been thrown in rivers, thus preventing the flow of water. They also agreed that people who construct over rivers should take responsibility to clean underneath their infrastructure as they are the source for the accumulated silt, rubbish and undergrowth that act as barriers that prevent the flow of water.

After the meeting, Jitesh Shah, chief executive of the Seychelles Infrastructure Agency (SIA), stated that the meeting was a fruitful one, taking into account efforts put in by the different agencies and this indicates that the committee is heading in the right direction to achieve its objective.

Mr Shah noted that there is a lot of design work on flood mitigation going on which requires a lot of coordination between agencies for satisfaction of the end product.

Speaking about the de-silting of six rivers, principal climate adaptation officer in the department of climate change Jean-Claude Labrosse said it is anticipated that work will take three to four weeks and after that the maintenance of the rivers will be handed over to the Land Waste Management Agency (LWMA) who is responsible for the management of all rivers and drainage in the country.