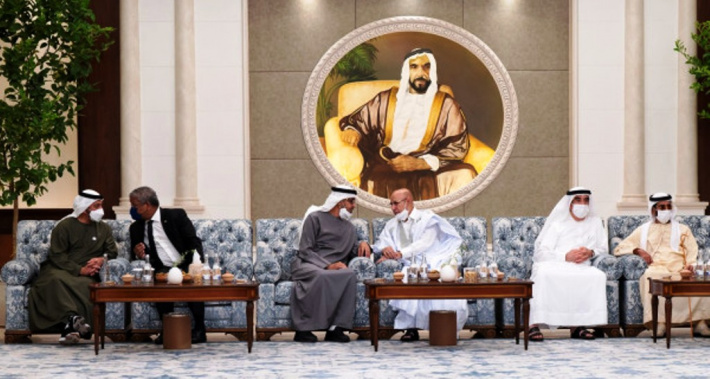 President Wavel Ramkalawan has met the new President of the United Arab Emirates, His Highness Sheikh Mohammed bin Zayed, where he presented condolences on behalf of the people of Seychelles, the government and in his personal name following the passing of their President Sheikh Khalifa.

President Ramkalawan also congratulated him on his election as the new president of the United Arab Emirates (UAE).

During their encounter, both President Mohammed and President Ramkalawan further reaffirmed the bonds of friendship and respect that unite the two countries and the willingness to further strengthen their cooperation in the interest of both peoples.

The ceremony was attended by over 400 local leaders, high-level dignitaries and leaders from around the world.

President Ramkalawan returns to the country this morning.

Abu Dhabi Crown Prince Sheikh Mohamed bin Zayed Al Nahyan was elected President of the UAE on Saturday by the UAE’s Federal Supreme Council made up of the heads of all seven emirates. The meeting was held at al-Mushrif Palace in Abu Dhabi and was chaired by Dubai Ruler Sheikh Mohammed.

Sheikh Mohamed bin Zayed Al Nahyan, 61, becomes the third President of the UAE and ruler of the oil-rich country founded by his father in 1971.

His election took place a day after his half-brother, President Sheikh Khalifa bin Zayed Al Nahyan, died on Friday and was laid to rest in Abu Dhabi's Al Bateen Cemetery just hours after his death was announced, in accordance with Muslim tradition. He was a pall-bearer at the funeral prayers for his elder brother.

The UAE is observing a 40-day mourning period.