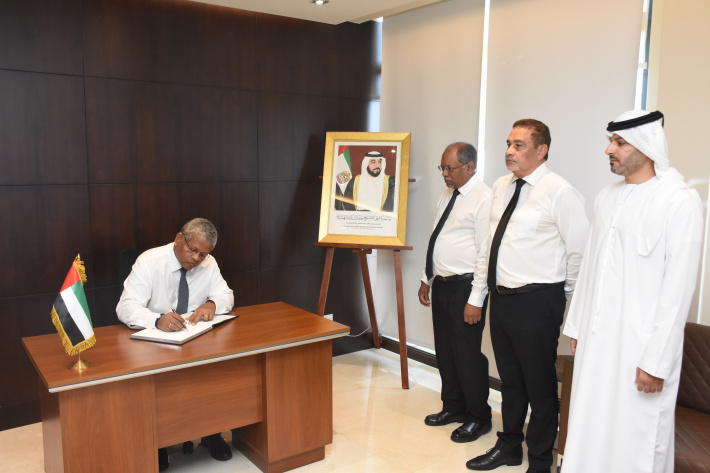 The President was accompanied by Vice-President Ahmed Afif and the Minister for Foreign Affairs and Tourism, Sylvestre Radegonnde, who also paid their tribute in the condolence book.

The ceremony took place in the presence of the acting chargé d’affaires at the embassy, Abdulla Alketbi.

After signing the book, President Ramkalawan, on behalf of the people, government and in his own name, expressed his deepest condolences to the people and government of the UAE, and to the family of the late Sheikh Khalifa, stating that Seychelles and the UAE has over the years developed very good relations.

“The UAE has helped Seychelles in many ways but it’s not just the help that matters, it’s the friendship. We are two nations that show respect towards each other and through this respect we have learned to grow together,” said President Ramkalawan, who noted that they have been guided by the aspirations of development, protection of the environment and seeing greater prosperity for both peoples.

“Our prayers are that this friendship continues to grow and will continue to be further strengthened. So to the people of the UAE, I express our deepest condolences. May the soul of our dear brother, Sheikh Khalifa, rest in peace.”

President Ramkalawan, who left the country on Saturday evening, was among several heads of state and dignitaries who attended the official funeral ceremony of His Highness Sheikh Khalifa Bin Zayed Al Nahyan in the UAE.

He is expected back in the country today.