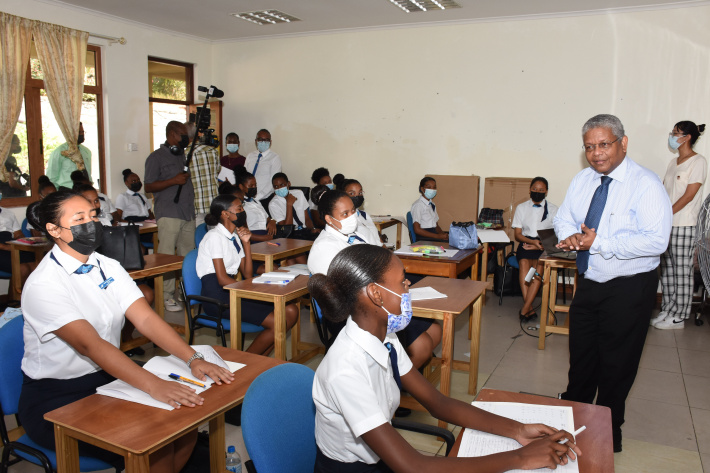 President Wavel Ramkalawan has expressed his happiness and is encouraged, with regard to the future of our tourism industry, by the interest and enthusiasm shown by the students in their studies, and that of the management and staff of the Seychelles Tourism Academy (STA).

President Ramkalawan made the comment following his first visit to the academy yesterday morning.

The visit forms part of his familiarisation rounds to ministries, departments and organisations to understand their successes and challenges and to interact with staff.

He was accompanied on the visit by the Minister for Foreign Affairs and Tourism, Sylvestre Radegonde, and other high officials from the tourism department.

“I feel very happy and encouraged with the attitude shown by the students towards their studies. I’ve been to a classroom, in which all of the students are finishing their studies at the end of this year and all of them have been employed already following their job placement programmes. This shows that they are interested in this field and that gives us the encouragement as it is guaranteed they will help to reduce the number of expatriates and gear up to manage our tourism industry,” said President Ramkalawan, who also expressed the same sentiments towards the management and staff for the work being done at the academy.

President Ramkalawan noted he was very sad and disappointed that the previous tourism management did not complete the re-development of the academy to turn it into a national and regional academy of excellence specialising in hospitality and tourism training although loan for the project was available.

He said that the government will continue to provide its full support to the students, staff and management and it will also seek to ensure that the re-development of the academy into a high standard national and regional training centre do get underway.

Led by STA director Terence Max and other senior staff members, the visit started with a short meeting with some members of management, staff and students in the academy’s restaurant.

In his address, President Ramkalawan congratulated the learners for choosing tourism as a career. He also encouraged them to concentrate more and to stay focused so that they finish their studies to help bring the tourism industry to the highest standard possible amid the challenges.

He added that decisions by government to re-look at the strategies of the Gainful Occupation Permit (GOP) is one among other options to open up opportunities for them, as Seychellois, to take key positions in tourism establishments and to further take control of our tourism industry.

He said that government will seek that hotel establishments do change certain attitudes that prevent Seychellois from attaining high positions as there are capable locals who are qualified enough to take up some of these top posts.

Speaking on the state of our present tourism situation, President Ramkalawan said that it is in good health and is responsible for the functioning of the country.

He noted that for the last four months, 115,000 visitors have entered the country and that people in the industry are happy.

He thanked and commended the management and staff for their passion and devotion to groom the students and said that government will continue to support the academy so that it provides the highest tourism education service to attract both local and foreign learners and to help grow the industry further.

On his part, Mr Max who welcomed President Ramkalawan for taking time to visit them, said the visit will definitely be a motivational boost for them in this challenging and yet exciting transition of planning and implementations, that will pave the way for the successful realisation of STA’s mandate.

He mentioned that the academy has re-structured all of its courses so that they become more industry-led, has re-introduced night classes and are in the process of re-validating all its programmes through the Industry Advisory Committee and the Seychelles Qualifications Authority (SQA) and which should be achieving Full Institutional Accreditation during the course of this year.

As STA is responsible for catering services for the Seychelles Defences Forces which also forms part of the students’ culinary practical sessions at the Seychelles Coast Guard (SCG), Mr Max informed that the academy has pushed for the consolidation of that partnership with the SCG and is also working on a new project that will see STA taking over the operations of the Pomme Canelles restaurant in the near future.

“We have also invested a substantial amount of funds in the refurbishment of some of our buildings, (though we wish we could do much more), to provide a safer and conducive environment for our learners and staff. Our short-term objective is to be able to satisfy the industry’s demands and regain their confidence in recognising the academy as a reliable source for their recruitments,” he added.

Mr Max stated that the ultimate long-term goal is for STA to be positioned and be recognised as a reputable tourism and hospitality academy, both regionally and internationally.

As a symbolic gesture to his first visit to the academy, President Ramkalawan was invited to plant a coco-de-mer nut in the Seychelles Tourism Pioneers Park. He was followed by Minister Radegonde also planted a second nut in the park.

Following the planting of the two coco-de-mer nuts, President Ramkalawan and delegation were led on a tour of the facilities which included the academic course and language classrooms and offices, situated in the new block and the administration office, the laundry, the mess hall, the kitchen, the Wellness and Spa practical and some other classrooms, situated further uphill with some located in the old blocks whose redevelopment has been put on hold. He also got to interact with the students, teachers and staff along the way.

STA employs 41 lecturers and 23 support staff catering for 498 students on the one-year, two- year and three-year advance, apprenticeship and Advance diploma certificate courses. It also receives the support of 14 contract workers for cleaning and security.

Minister Radegonde later said that to get students to join the industry after leaving the academy, STA has, as from this year, raised the academic level for entry and also looks out for students who are interested in joining the tourism industry, among other encouragement attributes.

He said that 100 students have been trained in Shannon College, Ireland, to take up positions in middle management in hotel establishments and this has not happened which has led 50 of them to move to other fields. He noted that the ministry is addressing the issue.

The accompanying photos show some highlights of the visit. 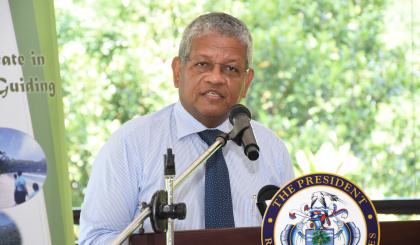 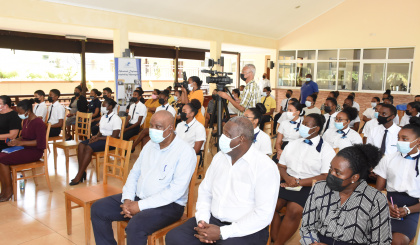 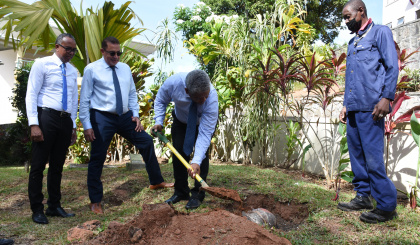 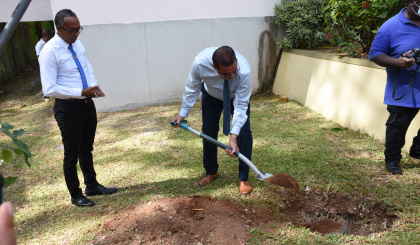 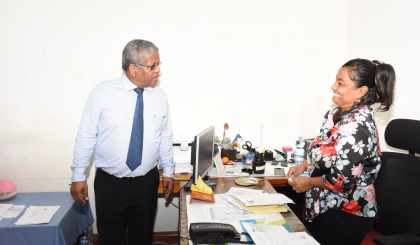 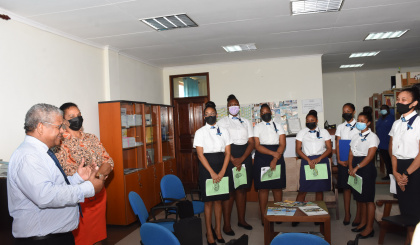 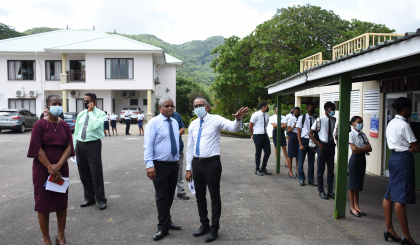 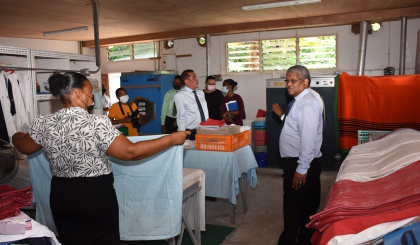 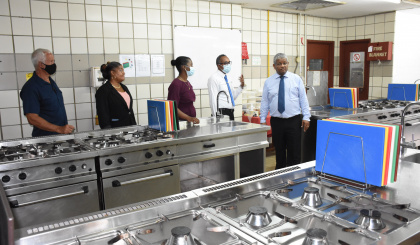