TIS, stakeholders in offshore explore challenges in related laws |06 May 2022 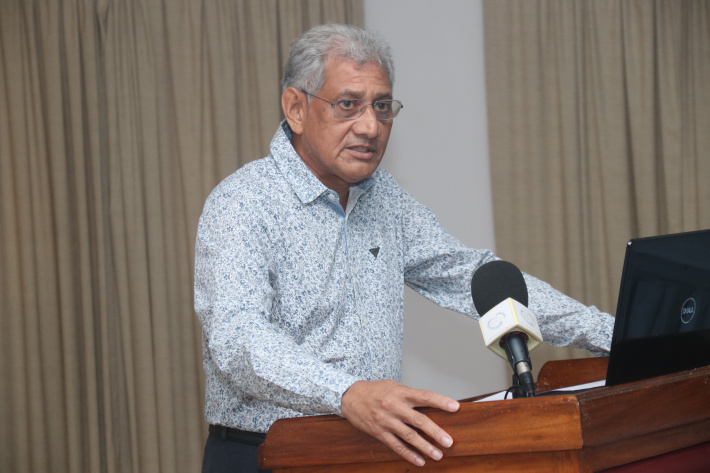 Transparency Initiative Seychelles in collaboration with the European Union yesterday hosted a consultative meeting with stakeholders in the offshore sector to identify weaknesses of relevant legislation and the practical challenges in achieving EU tax standards and requirements.

The consultation session which was held at the Seychelles Trading Company (STC) conference centre, Latanier Road, was also to propose solutions for the weaknesses identified and documented. Additionally it was an opportunity for the stakeholders to make known new products in store to embellish the sector.

Funded under the European Union (EU) project ‘Towards Improving Transparency, Good Governance and Accountability’, the consultation is part of a wider exercise being conducted to bring the country in conformity with EU tax regulations to therefore remove Seychelles from the EU grey list.

Other than representatives from the International Business companies (IBS), also present at the discussion were Transparency Initiative Seychelles (TIS) chairman Chrystold Chetty, the Ambassador of the EU to Seychelles Vincent Degert and his delegation, representatives from the Ministry of Finance, National Planning and Trade, Financial Services Authority (FSA), Financial Intelligence Unit (FIU), Central Bank of Seychelles (CBS) and other members of TIS.

In his opening remarks Mr Chetty said “we have to be mindful of the ever-evolving political and regulatory landscape and the ongoing pressures brought forth by our trade partners among which includes the findings in the Pandora Papers, the ongoing war in Ukraine and the continuing hunt for assets of Russian oligarchs which have found their way to be clandestinely hidden through offshore companies in certain jurisdictions.”

“Whilst we must admit that there have been great improvements in the context of Seychelles, our stories remain untold and unknown and our offshore sector still bears hard tint from past activities. We need to change this, to allow a healthy environment which would attract good elements of the financial sector especially as we move into the era of innovative financial products,” Mr Chetty said.

He stated that Seychelles scored well in the Corruption Perception Index for 2021 and maybe it could have done better if the negative stories of our offshore sector had not weighed heavily on our performance. He noted that we have to continue to work together to improve our global ranking on the Corruption Perception Index to which we are first in Africa.

Although our country is well in conformity with the EU recommendations, the question for EU is how our offshore sector is operating in regards to following all the rules and regulations that are now needed in terms of international function of the offshore sector.

“This is something that we want to see happening and it is why a debate is important. There is a reputation element that comes with the offshore sector. The latter normally don’t have such a good reputation because it is believed that it is there to support fiscal invasion, money laundering activities and financing of terrorists in some cases. So how do you build your offshore sector, what it brings to the economy and what are the risks there, is what we want to see debated on,” said Ambassador Degert, who thanked TIS for initiating the debate for people to better understand the offshore sector and the risks attached.

He noted that although the country is well in conformity on 38 among the 40 EU recommendations, however it is not enough as we have to show that the system in place (the legal framework, the financial service commission, the financial investigation unit etc...) work  and deliver on the procedures that are foreseen.

“The efficiency of the system is critical and this is something that needs to be discussed as well so that’s why we are having this debate in a kind of preventive operation to make sure that not only Seychelles adopts the regulations which have been done in general terms, which I want to congratulate Seychelles for that achievement, but we need to go one step beyond to make sure the system works,” said Ambassador Degert who noted that it is the reason why the EU has provide our country with assistance for the financial investigating unit to make sure they can conduct investigation when they get reports of suspicious transactions and can further take action on those reports.

The discussions were centred on presentations by FSA, FIU, CBS among others on the work being done to safeguard the sector.

Paul Robert from the FSA later explained that our country was blacklisted by the EU in December 2020 because we did not have a source-based tax system in place including a system to exchange information on the activities of the international businesses in line with EU norms. He stated that government has since then reviewed its laws and regulations including procedures for their implementation in line with EU’s recommendations and to which on a positive note the country was removed from the EU black list to the EU temporary grey list. He added that there is ongoing work to get the country from the grey list.

The inputs gathered from yesterday’s session will be put together by locally based consultancy company Island Legal Solutions, (which was present in the consultation meeting), to later be presented to the EU. 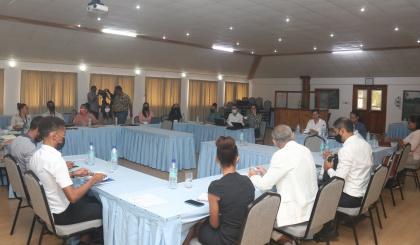