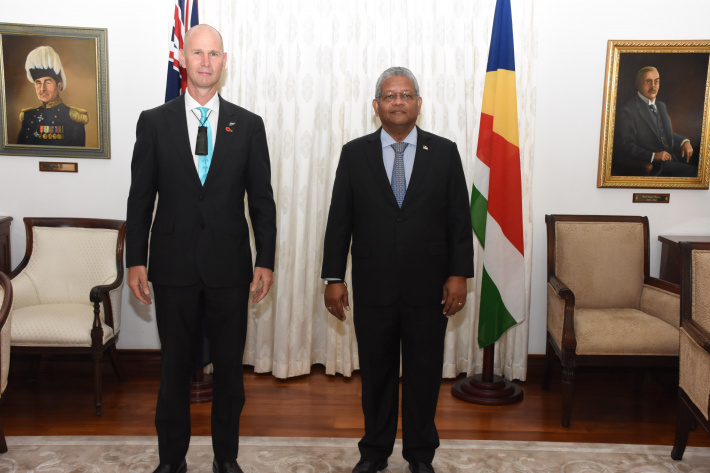 Bilateral interests and multilateral concerns between Seychelles and New Zealand were the topics of discussion between President Wavel Ramkalawan and newly-accredited High Commissioner Designate of New Zealand Michael Upton.

Mr Upton was received at State House yesterday morning by President Ramkalawan to whom he presented his credentials as the new HC Designate for his country. He was accompanied by the Minister of Foreign Affairs and Tourism Sylvestre Radegonde.

Speaking to the press after meeting the President, Mr Upton said he had a very good discussion with the head of State on issues such as trade, fisheries, tourism, climate change and border control.

The two countries’ bilateral interests, the impact of Covid-19 and the Russian invasion of Ukraine on both countries’ economies were also discussed.

“We are very keen to explore areas where we could share experience and knowledge, particularly in the area of border control. It’s an area of concern that his Excellency the President raised with me, so we will explore what is possible there particularly what can be done around the issue of the flow of illicit substances,” HC Upton stated.

He added that they also discussed the upcoming Commonwealth Heads of Government Meeting (CHOGM) to take place in Kigali, Rwanda in June. He noted that there’s a range of important topics to be resolved at that meeting and New Zealand is very keen to see that Commonwealth countries come together and contribute in various targeted ways, particularly in the areas of human rights, democracy and the rule of law.

With regards to the invasion of Ukraine by Russia, Mr Upton stated that his country stands with the international community and that New Zealand was very grateful of our country’s support of Ukraine amid our non-aligned position and commitment to speaking out on issues of concern.

“Our relations are very warm, a little bit like the weather today (yesterday). We have many areas of common interests and we also have shared values, particularly in foreign policy but also in terms of domestic settings, human rights and democracy,” said Mr Upton who also paid a courtesy call on Vice President Ahmed Afif.

High Commissioner Upton will also hold talks with other ministers and dignitaries while in the country. He is based in Addis Ababa, Ethiopia and replaces HC Mark Ramsden who had been holding the post since August 2018. 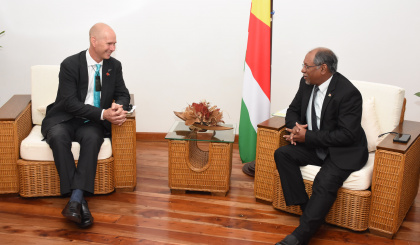