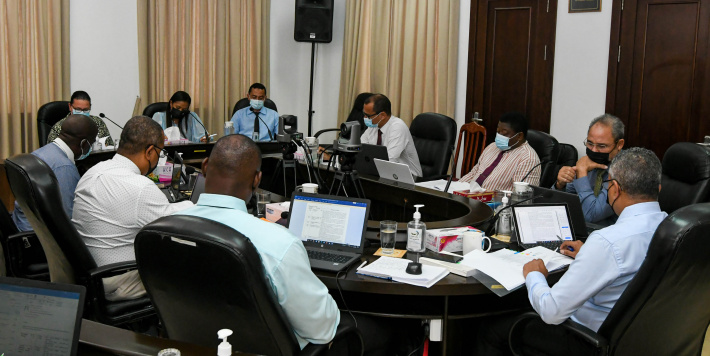 The Finance and Public Accounts Committee of the National Assembly yesterday heard from six governmental entities regarding the 2020 report of the Auditor General as part of its mandate to examine the financial statements of any public or statutory body and to consider any other matters related to public funds that may require an investigation or special audit.

The public hearings also allow the committee to propose any measures it considers necessary to ensure that the funds of the government are properly and economically spent.

Represented by chief executive Thereza Dogley and administrative officer Dina Antoine, the Information Commission of Seychelles, which promotes awareness, educate and popularise the right to access to information, was the first entity to be questioned by the FPAC, to start with, on the non-compliance in terms of procurement of goods and services procedures mentioned in the Auditor General’s (AG) report.

Ms Dogley explained that the reason behind the incompliance is the lack of quotation from suppliers, but however noted that all the requests for items such as furniture and other office supplies were approved by the finance department.

She added that with newly-gained resources, precisely transportation, the situation of non-compliance has been remedied and will reflect in the future AG’s reports.

Inventory and fixed assets was another issue underlined in the AG’s report, especially regarding the newly set-up inventory software system which is not being properly used for record keeping due to a lack of training on the part of the staff.

Regarding that issue, Ms Dogley noted that everything has now beensettled, in terms of staff training and system update.

The second entity to appear before the FPAC yesterday was the department of culture within the Seychelles National Institute for Culture, Heritage and the Arts (SNICHA) led by principal secretary Cecile Kalebi, along with executive director for human resources and administration Alex Rath and senior accountant Vania Hoareau.

The first question was regarding six bank accounts that were supposed to be closed, including one for Festival Kreol which was supposed to be disabled by August 17, 2017, contrary to audit report which shows that the bank account was still active past the given date.

On that particular matter, Mr Rath explained that every procedures relating to the closure of a bank account was carried out, including all reconciliations, except for the final formal letter which was not written and sent to the bank, thus keeping the account valid at the time of the audit, despite it was not active.

It is to note that any account will remain valid until a formal letter is sent to the bank, officially requesting the closure of the account.

In terms of visibility and fairness in the way the department is outsourcing, or bidding for its various projects, precisely in the construction area, PS Kalebi explained that everything goes through the procurement section which advertises the project via various media outlets, before assisting the department with the more technical issues, including bidding.

Regarding agreements with artists who sell their products through the museum, the AG’s report shows that a total of R75,000 was disbursed for a batch of 25 model tortoises, while the record shows that none were sold.

Based on that, Hon Gill suggested a new way of doing things, whereby the department reviews its method of agreement with the artists.

It was suggested that that the artists receive payments only after their products have been sold.

Ms Kalebi noted that an agreement has been met whereby artist will be paid on a monthly deposit system for their work.

On the issue of inventories within the department, it was noted that according to the AG’s report there is no bin card system – the record maintained under the perpetual inventory system by the stores department shows the quantities of materials received, issued and balance in hand after each receipt and issue – within, while proper shelving and stocking were not available.

Mr Rath noted that from the last report, the system has now been fully updated and operational.

Overseas trips without invitation, along with per diem and accommodation was another issue highlighted by the AG’s report, and Ms Kalebi explained that invitation can be made available, but was not available at the time of the audit.

She explained that invitation is a prerequisite for any overseas trip.

The Truth, Reconciliation and National Unity Commission(TRNUC), led by vice-chairman Michael Green who is also responsible for administration, and executive secretary Julia Ernesta was the third entity before the FPAC yesterday.

Granting of annual leave in excess, whereby three employees were granted leave, even if they had worked for only a short period of time with the commission.

Mr Green explained that prior to their confirmation into their posts, the three employees had already made plans to travel overseas, and through mutual agreement, they were allowed to go, on the condition that they settle the leave once they start working.

Regarding the issue of overpayment of allowances in respect to vice-chairperson and other commissioners, Mr Green explained that it was the former Department of Public Administration(DPA) which calculated the salary of members of the commission and yes, there was an issue of overpayment by a few hundred rupees which has been sorted out with members repaying via their own terms and conditions.

In regards to the commissioners who have left the TRNUC, Mr Green explained that the department of finance is still working on their dues and the excess will be deducted from it before being disbursed.

Regarding rent which equalled to R179,000 per month, Mr Green explained that through its contact at State House, Mrs Yvonia Richardson, the TRNUC was given the green light to rent the place where its headquarters are based. This is because the price was within market value and they were never told that they were subjected to, or advised on going to any rent board whatsoever to seek for prior approval.

On the issue of fuel coupons worth R24,000 for one single person as highlighted in the AG’s report, Mr Green explained that the person in question is the husband of the chairperson of the TRNUC, Gabrielle Louise McIntyre who is entitled to fuel coupons. Since Mrs McIntyre does not drive, it’s normal for the husband to drive her.

Mr Green added the as per her contract, the TRNUC chairperson is entitled to a vehicle, along with fuel for official and private use, without any set limit.

Following questions on the matter, Mr Green explained that because it gets a small budget, the assigned driver to Mrs McIntyre was transferred into the post of perpetrator support officer and it was then that the husband became the driver.

The department of tourism which is mandated to encourage the development of the tourism industry in Seychelles was the fourth entity to appear before the FPAC yesterday, led by principal secretary Sherin Francis, along with director general for human resources and administration Jenifer Sinon and senior administrativeofficer Don Julie.

Once again non-compliance, mainly in terms of procurement process was highlighted in the AG’s report, particularly in providing the three necessary quotes as per the normal procedure.

Mrs Francis explained that most of the time suppliers refuse to provide quotations, without full commitment of purchase of the materials, while the urgency of the need of certain items force them to overlook the required procedure.

With regards to the purchase of items of uncommon nature, Mrs Francis said it is in direct reference to the secretariat of the office of the minister (at that time) and according to her, justification from management was that there were regular meetings which went past lunch time, therefore it was more cost effective to prepare light lunches on such occasions.

Mrs Francis explained that at present, in regards to sourcing of three quotes, there is an existing procedure in place to ensure its application, while the staff members are also well aware of its existence and the need for its proper application, despite the various challenges that come with it.

She also noted that procurement is an area whereby a lot of efforts have been put in to ensure that there are policies, committees and checks in place.

In the case of payment not made to the correct recipient ‒ a set of 80 uniforms at a cost of R12,000was paid to an individual, instead of a supplier ‒ Mrs Francis said it fell under the urgency of the payment, whereby the supplier was not registered in the system.

She said it was easier to pay the individual, rather than the company.

The Creative Industries and National Events Agency (Cinea) which was mandated to promote the development of creativity, skills and talents in individuals and collectively in the fields of visual, performing and literature and arts was also before the FPAC yesterday, where executive director of the Creative Seychelles Agency (replacement for Cinea) Emmanuel d'Offay, ex-chief executive of Cinea Galen Bresson, director of human resources Elvis Telemaque and senior accountant Vania Hoarauanswered questions.

Discrepancy in printed tickets for the Festival Kreol, an outstanding balance of R10,000 for an activity hosted under the theme‘Bon Vye Tan’, along with a cash short of R10,000, and follow-up on ‘Fon Lanmal’ 2017, accumulating to an outstanding of collection of R32,400 was the first point that was raised based on the AG’s report.

Regarding the above, Mr Telemaque explained that the above-mentioned have been put before the department of finance, and the procedure is ongoing for a write-off.

The matter of discount in absence of regulation was also brought up, and again, according to Mr Telemaque, they are working in conjunction with the department of finance to come up with a framework regarding the issue.

As it was the case for the previous entities before the FPAC yesterday, non-compliance issues regarding procurement procedures came up and Mr d’Offay explained that when it comes to culture, it is most of the time impossible to get three quotes as per the requirements.

He gave as examples specificartists, as well as means of transportation from the inner islands to Mahe, noting that there are not much options, therefore, three quotes in such cases do not make any sense.

Mr D’Offay, however, noted that in situations where they can follow the procedure, they always make it a must to follow.

Department of youth and sports

The renting of storage space for the Duke of Edinburgh Award, instead of using facilities available at the National Sports Council (NSC) was one of the main concerns raised by the FPAC.

PS Jean-Louis explained that upon taking office last year, he made it his priority to remedy the situation by cancelling the rent and move all assets to the NSC facilities at Stad Linite.

Another issue which came up was procurement without alternative quotes or prior approval.

The Committee on Government Assurances of the National Assembly (Coga) |28.05.2022