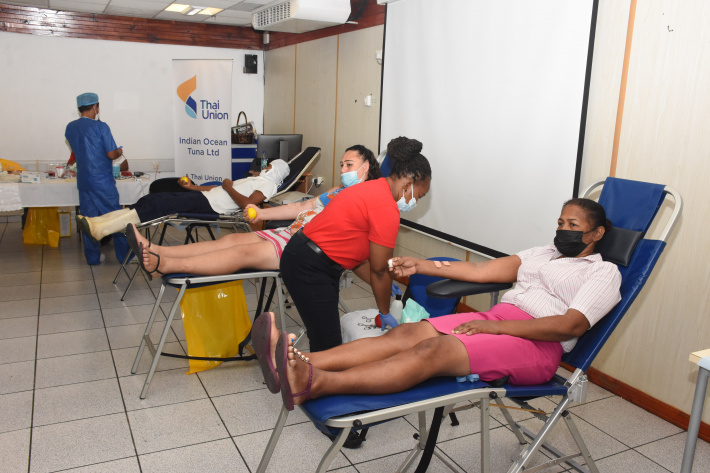 A group of employees of the Indian Ocean Tuna Limited and Thai Union have responded to the continuous appeal by the blood transfusion unit of the Seychelles Hospital to come forward and give blood.

It was in the presence of human resource administrator Sandra Pool, cost accounting manager Tessy Tamatave and other factory workers that the group of some 27 employees went through the process of giving blood last Friday.

Ms Tamatave noted that every year the company engages in a blood donation campaign as it is a way to give back to the community and help save the lives of our brothers and sisters fighting different illnesses. She remarked that the participation and turnout is better than last year as people become more aware of the importance of giving blood.

For her part, Ms Pool remarked that the workers who volunteered came from various units of the company and they are of different nationalities.

“I have been donating blood for the last four years and every time there is a blood drive I take part and I also volunteer to do sowhenever one of my own family members needblood,” said Sandra Savy the team leader in the labeling unit. She added that it is good to encourage others to volunteer to donate as well.

“Firstly, I volunteer for humanity. Secondly I am O+ so I know that somebody can actually receive blood from me and I do it because one day I might also need blood from somebody who is O+ like myself,” said Hytham Idris Abdulrazak, a Kenyan national working at the factory.

This was the second time he gave blood and he is very happy that he is doing something positive for society.