Linyon Demokratik Seselwa elected member of the Nation Assembly for the district of St Louis, Sathya Naidu, has been elected to lead the United Cities and Local Governments of Africa’s (UCLG Africa) network of locally elected youth of Africa for the continent’s eastern region.

This was during the United Cities and Local Governments of Africa’s (UCLG Africa) regional caucus for the Eastern Africa Region from March 7-8, 2022 at the Safari Park Hotel in Nairobi, Kenya. The meeting was organised in collaboration with the Council of Governors (CoG) of Kenya, the Kisumu County Government and the Ministry of Devolution of Kenya.

“It is an honour and privilege to be representing the Seychelles in a role of leadership at the level of our continent. Together with like-minded and promising young African leaders we envisage to dedicate our time, energy and effort towards addressing the plight of our youths,” Mr Naidu has said.

The network is the first time to be launched at UCLG Africa and Mr Naidu is now eligible to contest for the post of president of Yelo during the ninth Africities Summit in Kisumu, Kenya in May 2022.

Other than Mr Naidu, the Eastern Africa Regional Caucus of UCLG Africa was attended by Kevin Perine, principal secretary for local government and Lydia Charlie, executive director in the Mayor’s Office. All three delegates were representing the Association of the districts of Victoria.

The regional caucus for the Eastern Africa Region was organised in preparation for the ninth Africities Summit scheduled to take place from May 17-21, 2022 in Kisumu, Kenya. The theme of the summit is: ‘The Role of Intermediary Cities of Africa in the Implementation of Agenda 2030 of the United Nations and the African Union Agenda 2063’.

Subnational and local governments associations of eight out of the 11 countries of the region took part in the caucus. They were the chairpersons and permanent secretaries of the national associations of subnational and local governments of the East African countries, as well as the chairpersons of the country chapters of the Network of Locally Elected Women of Africa (Refela) and the Network of Young Locally Elected Officials of Africa (Yelo) aged 35 years or under.

The different allocutions highlighted the importance of the coming Africities Summit as a platform for dialogue on decentralisation in Africa, exchange on best practices on the governance of African cities and territories across Africa, interaction between subnational and local government authorities with various stakeholders such as ministers, civil society, academia, private sector or development partners.

For the first time, the Africities Summit will be held in an intermediary city.  The governor of Kisumu is of the view that the success of this summit will open the door to other intermediary cities in future to host the event.

In his opening address, Hon. Eugene Wamalwa, called on all member states from the East African region to be present in Kisumu.

He also expressed his expectation that, in the framework of this caucus, the government of Kenya, through the Ministry of Devolution, and UCLG Africa sign the agreement establishing the East Africa Regional Office of UCLG Africa (EARO) in Nairobi.

The two days of the caucus have allowed the participants to discuss the main agenda items of the Africities Summit in Kisumu and the way the East Africa region should be present in the proceedings of the summit.

A special attention was called on the need for subnational and local governments of the East Africa Region to define the priority issues they want to put forward during the summit’s debates, the five questions they wish to table to ministers on the one hand, to development partners on the other hand, urging the tripartite dialogue roundtable scheduled on May 21, 2022.

They also discussed the contribution of the region in the special events organised during the summit, namely, Climate Day, Diaspora Day, Digital Day, Culture Day, Urban Planning Day, Housing Day, Women’s Day, Youth Day, and Africities Investment Forum. For this last special event subnational and local government authorities from East Africa were requested to identify priority projects to be presented to investors for their financing. The Africa Territorial Agency, a special purpose vehicle aiming at facilitating access of African cities and territories to the financial market was also presented and discussed.

Furthermore, the participants received a presentation on the UCLG Africa e-learning platform which aims to support local authorities of the continent in their digitalisation process. Seemingly a presentation of the UCLG Africa Trombino platform allowed the participants to appreciate the urgency to be present on the internet in an organised manner to take advantage of the branding and territorial marketing possibilities offered by this tool. Cities and territories were called upon to be on the Trombino platform and participate in its update.

The other aim of the caucus was also to designate the candidates of the East Africa region on the governing bodies of the UCLG Africa, Network of Locally Elected Women of Africa (Refela) and the Network of Young Locally Elected Officials of Africa (Yelo) to be elected during the general assemblies of these entities scheduled during the Africities Summit in May 2022 in Kisumu, Kenya.

The same process was followed for Refela and Yelo. The caucus also designated the candidate of the region to be among the five members of the financial management committee of UCLG Africa, and the representative of the region on the electoral commission set up to supervise the electoral operations for each of the above entities (UCLG Africa; Refela; Yelo).

Hereafter are the nominations on the different bodies of UCLG Africa, REFELA, and YELO.

Result of the Refela caucus

Result of the Yelo caucus

The three candidates of Eastern Africa for the Yelo board

On the occasion of the International Women’s day, participants received a video message by Macoura Dao, president of the Network of Locally Elected Women of Africa (Refela).  In her address she highlighted that beyond the celebration of March 8, a deep questioning should be made on the role of women in society, on the effectiveness of their rights, and on the challenges that still need to be taken up so that equality between women and men is a source of opportunities now and for the future. All women present at the caucus meeting received a gift in the framework of the celebration of the International Day of Women Rights. 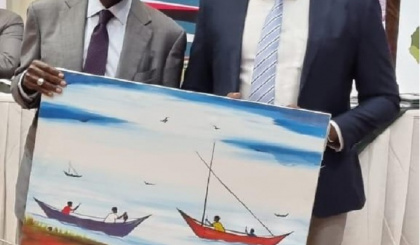