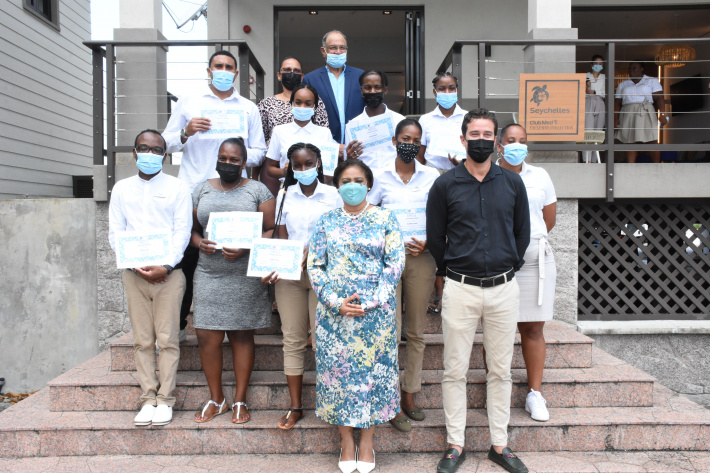 The eight staff in a souvenir photograph with guests (Photo: Joena Meme)

Eight staff of Club Med Seychelles have been awarded certificates of confirmationto follow overseas training in France for a six-month period.

Ms Dookley described the moment as “a milestone in the ministry’s history” as they sealed the commitment made the previous year with Club Med. This was to keep its promise to not only recruit locally as much as possible but to also train Seychellois, a move initiated by the employment department.

Last year Club Med had given its commitment to enhance the local expertise through promotion and job opportunities in other resorts of Club Med.

Minister Francourt said they have been advocating for a long time for the development of Seychellois workers. “It is gratifying to see that gradually we are progressing,” she said.

Minister Francourt said “today is a testimony of this engagement with concrete evidence whereby eight Seychellois will be working in other Club Med destinations around the world. One other Seychellois from Club Med has already left and is currently working in the Dominican Republic”.

She described this as a great achievement, adding that upon their return they will be able to share their newly acquired knowledge.

Minister Francourt also took the opportunity to encourage other resorts to follow in the footsteps of Club Med.

Club Med Seychelles’ director of operations Daniel Guimaraes said that “la mobilité internationale  through well-established plans and structure, a project that is new for Seychelles, is beneficial for both Club Med and the country.

Mr Guimaraes saluted the cooperation and relationship between the Club Med and the department of employment.

He also congratulated all the awardees and thanked them for the remarkable work they have produced as well as wished them farewell and an amazing journey ahead.

Mr Guimaraes said these employees are an example to other employees and he is very proud of them.

The eight awardees from the restaurant, housekeeping and food production will get the chance to further their skills in France for six months at Club Med Palmyre Atlantique, Club Med Opio and Club Med Arcs Panorama, then possibly move on to other locations.