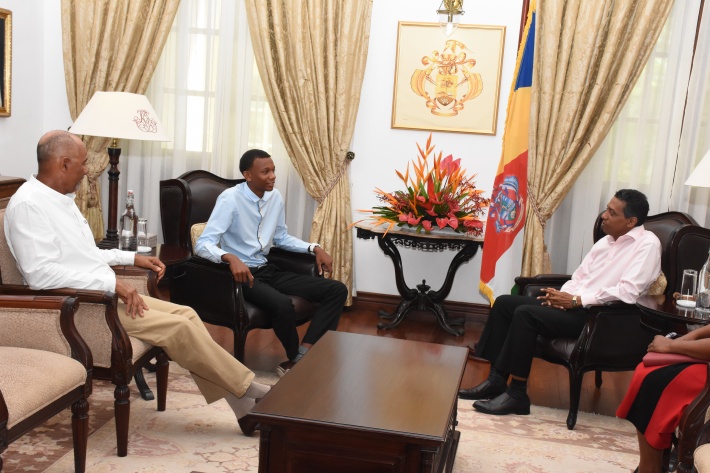 President Danny Faure has met with 18-year-old Eddie Barbé, an aspiring future seafarer and his mentor William Rose, the owner of Inter Island Ferry based on Praslin.

For many young Seychellois living on Praslin and La Digue and who want to pursue a career in the maritime sector, they have to come to Mahé for their post-secondary studies and this can be quite difficult as they have to leave their home and family.

This was the case for Eddie Barbé who instead of pursuing his post-secondary studies at the Seychelles Maritime Academy decided instead to train with Mr Rose, who runs the inter island ferry between Praslin and La Digue, to become a certified seafarer.

“Eddie, who aspires to become a certified seafarer began his training with us five years ago when he was in secondary two (S2). He came during the weekends and school holidays. We put him through the proper training process that every other seafarer goes through until he graduated from secondary school, following which we employed him full time,” said Mr Rose.

He added that since the start of his training five years ago, Eddie has learned how to conduct maintenance on the boats as well as interact with passengers among many other tasks.

“Eddie is avery disciplined young man who takes his job very seriously and is always eager to learn. It is our responsibility to shape and educate the next generation as they will be the ones taking over the maritime industry,” Mr Rose added.

On his part, Eddie said “the ocean has always been my passion, so I am very grateful to study under Mr Rose’s guidance”.

During his meeting with President Faure, he was given more encouragement to continue what he is doing.

Eddie added that there is still a long way to go before he becomes a fully-fledged seafarer but with the help of his mentor he believes that he will accomplish his dream.