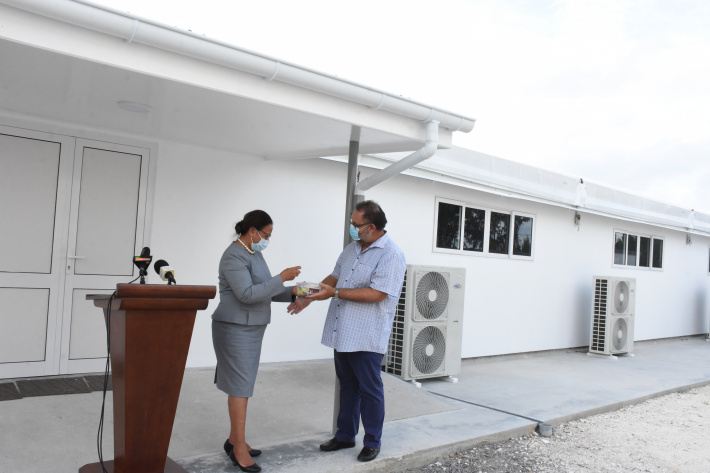 With the recent sudden surge in the local Covid-19 cases, the Ministry of Health is now better equipped to handle the present and future situations.

This follows completion work on the new field hospital at Perseverance which has a capacity of up to 60 beds.

The new facility, which has been erected at the Seychelles Coast Guard base, is a gift from the State of Qatar, under the Qatar Fund for Development (QFFD) which is a government entity in the State of Qatar, responsible for the State's international development and foreign aid, set up by Law 19 of 2002.

Building materials for the hospital, along with all other needed equipment and accessories and manpower for the project arrived in the country on board a special flight by the Qatari Emri Air force plane on Monday September 13, 2021.

The first phase of the project was carried out by members of the Qatari armed forces, while additional work fell under the responsibility of the Green Island Construction Company (GICC).

The completed project was officially handed over to the Minister for Health Peggy Vidot by the chief executive of the Islands Development Company (IDC) Glenny Savy, in the presence of President Wavel Ramkalawan, Vice-President Ahmed Afif, Designated Minister Jean-François Ferrari, cabinet ministers, as well as senior officials of the Health Care Agency and staff of the GICC.

Accepting the keys to the new facility from Mr Savy, Minister Vidot noted that the country was very fortunate over the preceding months that the number of Covid-19 cases was stable and the new facility was not in immediate need.

However, she said, with the recent surge in cases, as well as the emergence of new variants, there has been an urgent need to undertake certain works on the facility to enable the ministry to make maximum use of it.

Minister Vidot explained that while the structure itself was sound, additional necessary support facilities for staff had to be added to ensure that they can provide an effective service, while also guaranteeing a safe working environment for them.

She added that certain modifications to the external facade have been necessary to deal with the sometime extreme local weather conditions.

Minister Vidot further noted that despite the inclusion of support facilities, they have managed to maintain the capacity for up to 60 beds, which she said greatly increases the national capacity at a time when there are so many uncertainties around how this current pandemic will evolve.

To conclude, the health minister noted that such a facility will be of great use to the country beyond this current pandemic, during any national emergency.

“We have seen that similar threats to the public health are becoming more common and although we have been fortunate to have avoided them prior to the Covid-19, such a facility allows to be better prepared for the future,” she added.

She also thanked the GICC which managed to complete the additional work in a space of three and a half weeks.

Those present then had the chance to visit the new facility. 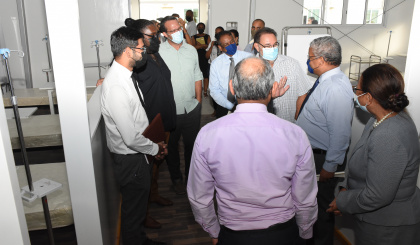 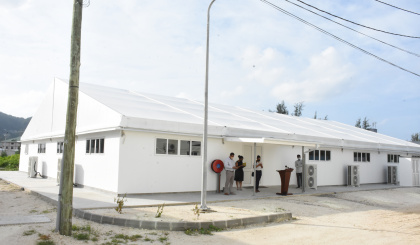 The field hospital viewed from outside 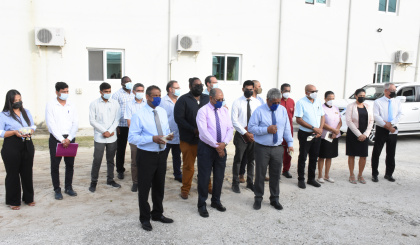 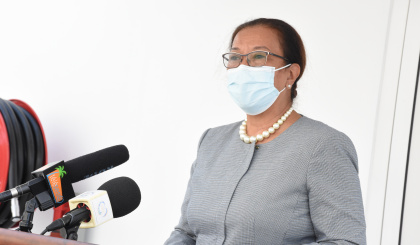 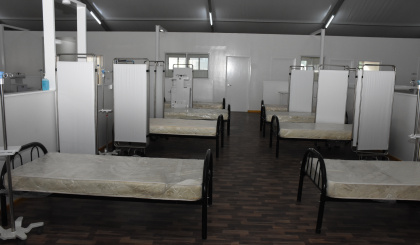 A partial interior view of the hospital