The Seychelles Coast Guard (SCG) has the capability to extend its operations further and stay longer at sea now that it has added its first auxiliary vessel, Saya De Malha, to its fleet of vessels.

The supply vessel is a donation by INPESCA Fishing Belize LTD, based in Portugal, to the government of Seychelles. SCG has been entrusted to accept and operate the vessel on behalf of the government.

Saya De Malha will be used in a multitude of supporting roles for SCG and contribute to extend the reach of our maritime forces. With its capabilities, SCG will be able to effectively replenish its various outstations on outer islands, refuel and replenish its patrol vessels at sea and better assist local authorities like the Seychelles Fishing Authority (SFA) in fish management, as well as the police with counter-narcotics and other law enforcement operations at sea. The ship can also be used to contribute to humanitarian assistance and disaster response operations within the region.

The auxiliary vessel was handed over to SCG, through the chief of defence forces, Brigadier Michael Rosette, by the president and general manager of INPESCA Fishing Belize LTD, Arrien Guillermo, in a ceremony held at the SCG base, Ile Perseverance on Saturday morning.

Accepting the vessel, Brigadier Rosette thanked Mr Guillermo for the donation and said that the ship will no doubt make a difference in the way the SCG will manage our ocean resources and operate on the outer limits of our EEZ and beyond; with the possibilities of venturing to areas beyond our own territory and ensuring more flexibility and mobility of the force.

In his addresss, President Ramkalawan said the 41-metre vessel will now make patrols by SCG more effective and further she will help in the training of young men and women in their vocation to become able seamen and sea women.

He called on SFA and other organisations to make use of the vessels as it is fitted to accommodate their tasks at sea.

He also thanked Mr Guillermo for the donation and other partners who have helped in one way or another to secure the vessel.

After the hoisting of the national flag onboard Saya De Malha, President Ramkalawan and guests were taken on a tour of the ship which was followed by blessings by SDF chaplain, Deacon Louis Agathine.

The commander of SCG, Colonel Attala, said that the vessel, with bedding capacity for 20 crew members, is fully manned by SCG sea personel. It is expected out on its first official mission in early February.

The SCG’s Saya De Malha is named after the Saya De Malha bank, a plateau located 362 nautical miles South East of Mahé that is being jointly managed by our country and Mauritius.

The vessel Saya De Malha, formely ‘Txori Lau’ was constructed and launched in Portugal in 2003. It had been operating for many years as the supply vessel of INPESCA Fishing Belize LTD, in support of tuna purse seiners operating in our waters. Saya De Malha is the latest acquisition by SCG in its fleet of vessels following the acquisition of patrol ship ‘Zoroaster’ in June 2021. 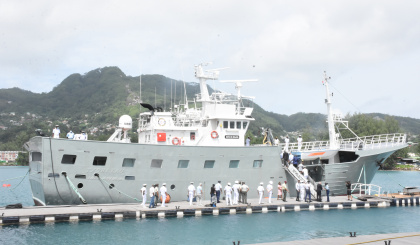 Guests boarding the Saya De Malha for a guided tour 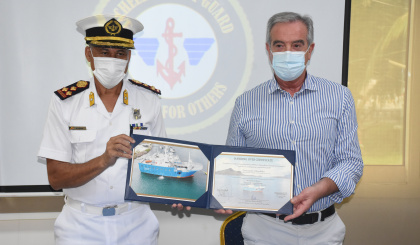 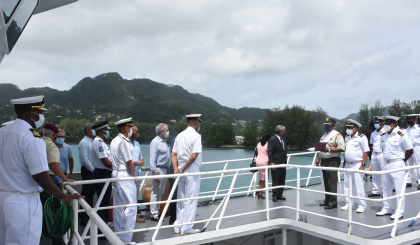