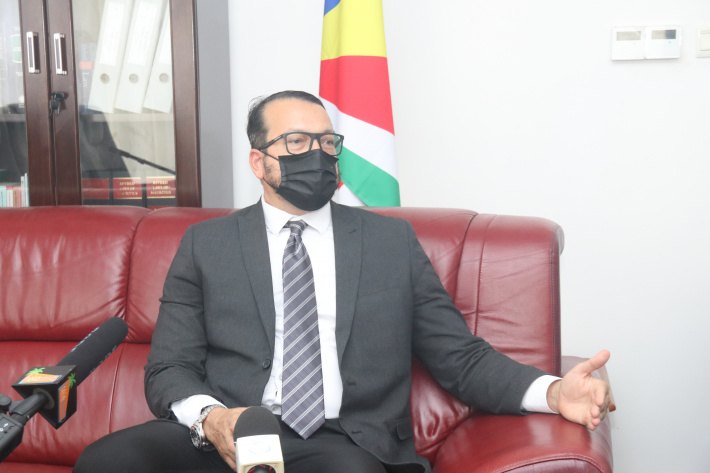 After the official re-opening of the Courts in Seychelles, Chief Justice Rony Govinden met with the press to talk further on his message and other issues. Below are excerpts from the interview.

The Press: CJ Govinden, you are aware that each media house already has its mandate and guidelines, now in your speech you asked all media houses to not hide anything. Does this apply to this US $50 million case only or to all cases?

CJ Govinden: I have noticed this in all cases that are ongoing in court. The Court is a public court, exceptionally in some cases. People are to listen to any case. The media is here to report on what has happened. If there is any legal constraint, then I would understand – but there is none. Most of the media houses are hiding some facts and did an auto-censor. My intervention is to address this concern that the Court is not participating in this restriction. This is being done by the media houses following their own mandate. For me there is no legal ground for the media houses to be scared. Cases that are related to drugs, corruption are of interest to the public. It is better the public learn from the press rather than social media where the news are distorted!

The Press: How much access will we get to cover the events?

CJ Govinden: As stated before, access to the media for interviews is only outside the Court room for accredited journalists. If you want some footage/photographs of the in-session, permission should be sought from the Judge and it will be at his discretion. We do not want the media to affect the process of the Court. What we want is for journalists to give the facts about the cases with the aim to inform the public and using his/her objectivity.

The Press: What about rape cases? If we give the names of the accused, it will be very easy to identify the victims…what is your take on that?

CJ Govinden: Rape cases fall under another category. When it comes to minors, we would not want to affect the future of the victims. When we give the names of the victims, the media should use their own discretion and many times the Judge already order not to mention names in the cases. Changes have been made in the way we interview the children in sexual abuse case when it comes to minor. Now the children are being questioned without seeing their abuser using audiovisual. The child sees only the two lawyers and the Judge. I always tell the Judges, even if the law says we have to cross examine the child, they have to use their discretion. Do not let the children get bullied/oppressed by the lawyers. Already the child is scared.

The Press: Two years since you are CJ and you have managed this institution under straining conditions brought about by Covid-19. What are the challenges you faced and where is the Judiciary heading to?

CJ Govinden: Our major obstacles were mainly on the capacity for the Judiciary to deliver its services – we either had lockdown or we had our staff not available on account that they were in quarantine. The way we operate is to face the public – as witnesses, lawyers, judges etc. This had a direct impact on cases which were already listed. But on the other side, we started using virtual hearing and using audio-visual. Many cases were removed from our system by shifting the way we work. Another way we were able to manage the situation was due to the fact that lawyers became more conscious and many cases were settled and the parties walked away with out of court settlements. We have also noticed that fewer cases were filed as the pandemic had a direct impact on the financial capacity of the public.

The Press: People are being asked to pay their bail in cash, is this not helping in money laundering?

CJ Govinden: Provision to pay cash bail is already in our laws. If we are imposing a huge cash bail, automatically the necessary institutions will verify where the money comes from as we do not want money coming from proceeds of crimes to pay for the bail. An inquiry is being done to establish this fact. It is not an automatic process where the money is accepted.

The Press: What is the relationship between the Executive, Legislative and Judiciary?

CJ Govinden: The work relationship between the three is in good health. We have a system of ‘separation de pouvoir’. Each one has a specific role to play and no one interferes in each other’s job. Judiciary fulfills its responsibility independently and impartially. But at the same time, the three institutions make the country work. The President of the Republic is the chief executive and is on top of all. That is why I found it relevant to invite the President for the re-opening of the Court. It is the same when the President is being inaugurated or the opening of the Legislative, we are invited to attend. This is the way we appreciate the work of each other without interfering in the work of each other.