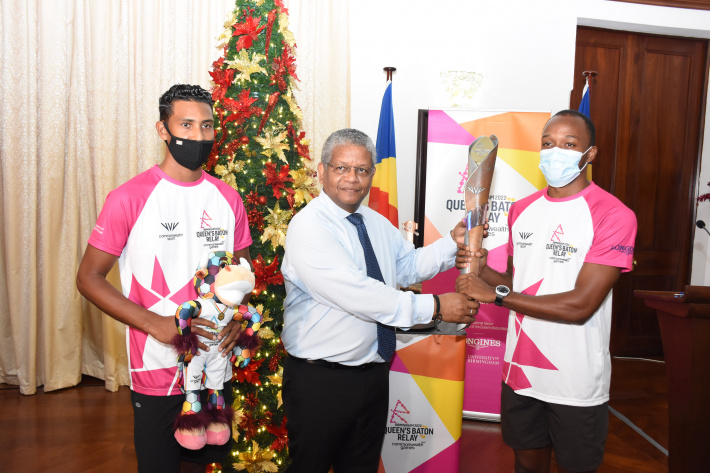 In a historic moment on Friday, the Queen's Baton Relay – which is a relay around the world held prior to the beginning of the Commonwealth Games – entered State House, accompanied by a group of Moutya musicians.

A significant moment in the country’s history since it’s the first time that State House welcomed both the relay and a Moutya orchestra, barely two weeks after the inscription of our traditional music on the representative list of the United Nations Educational, Scientific and Cultural Organisation (Unesco).

It was Minister for Family, Youth and Sports Marie-Celine Zialor who started the relay, before handing over the baton to Vice-President Ahmed Afif who carried it inside State House where it was handed over to President Wavel Ramkalawan.

Also present to witness the historic event were Minister for Local Government and Community Affairs, Rose-Marie Hoareau; secretary general of the Seychelles National Institute for Culture, Heritage and the Arts David Andre, who is also the Mayor of Victoria; president of the Seychelles Olympic and Commonwealth Games Association (Socga) Antonio Gopal; principal secretary for Youth and Sports, Ralph Jean-Louis and secretary general of Socga Alain Alcindor.

Seychelles is the 21st country – last in Africa, after Lesotho – that hosted the baton which will go to Pakistan next.

Addressing those present, President Ramkalawan said welcoming the Queen’s Baton to State House bears testimony of the government’s commitment and engagement towards the progression of local sports, as well as the wellbeing and development of the youth.

He said the event is also proof the whole country will be behind the athletes during the Birmingham 2022 Games, since sports is one of the activities that brings a whole nation together.

President Ramkalawan also noted it is evident that there has been a total revitalisation in Seychelles’ sports, accompanied by new vibes and energy.

The new vibes, he added, will be greatly needed next year at the Commonwealth Games.

The Baton carries a message from the Head of the Commonwealth, currently Queen Elizabeth II, while the relay traditionally begins at Buckingham Palace in London as a part of the city's Commonwealth Day festivities.

The Queen entrusts the baton to the first relay runner.

At the Opening Ceremony of the Games, the final relay runner hands the baton back to the Queen or her representative, who reads the message aloud to officially open the Games.

The Queen's Baton Relay is similar to the Olympic Torch Relay.

The accompanying photographs show some highlights of the ceremony to welcome the Queen’s Baton at State House. 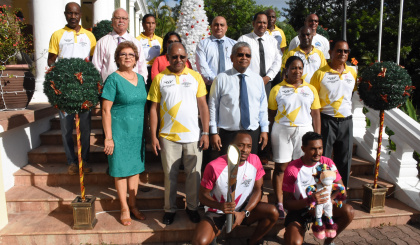 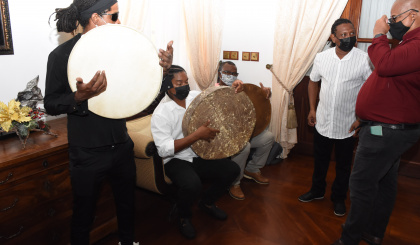