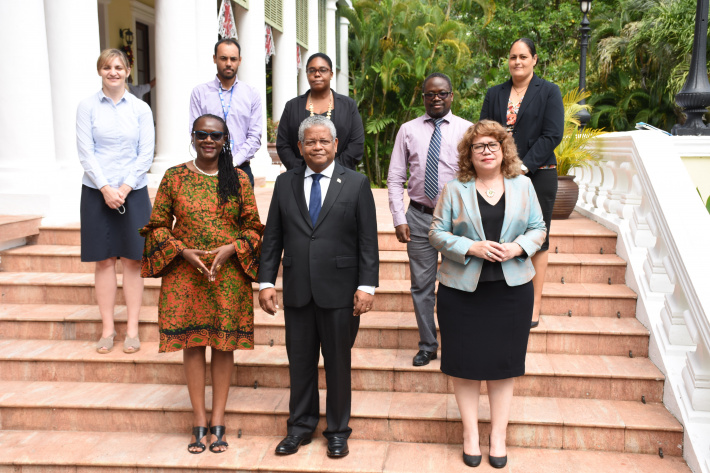 The UNDP delegation in a souvenir photograph with President Ramkalawan and PS Fock-Tave (Photo: Jude Morel)

The aim of the visit was for the UNDP representative to brief the President on UNDP programmes that are going on since the last four years and the plans for the next couple of years.

Mrs Serumaga and her delegation had been in the country on a two-week mission. Also present during the meeting at State House was the principal secretary for Foreign Affairs, Ambassador Vivienne Fock-Tave.

The discussion between Mrs Serumaga and President Ramkalawan centred on the results of COP26, held recently in Glasgow, on efforts towards the public administration reforms, on the environment and also on some initiatives that UNDP is undertaking.

Speaking about cooperation in the Blue economy, Mrs Serumaga stated that over the last four years, UNDP has managed to deliver on programmes worth about US $16.5 million and has also been able to mobilise new resources for the sector.

“So over the next year and a half, we expect to have about US $10 million and again it will be focused on the Blue economy,” she added.

Mrs Serumaga said that UNDP has just started a programme on coral restoration on Curieuse Island, including in other locations and will also continue with the eco system based adaptation works going on in places like Val d’Andorre.

Apart from the meetings, Mrs Serumaga also donated a number of Information Technology (IT) equipment to the department of Foreign Affairs, comprising fifty laptop computers, a server, scanners and tablets and a consignment, which includes 98 laptop computers, 98 docking stations, along with four scanners, to the Ministry of Finance, Economic Planning and Trade.

Ms Serumaga amd her delegation also visited a GEF Small Grants Programme energy efficiency project at the Montagne Posée prison to be completed by end of this year. The US $50,000 project entitled ‘Greening the Prisons’ aims to reduce the carbon footprint of the Seychelles prisons through energy efficient lighting, solar water heating and rainwater harvesting.

Mrs Serumaga, who serves both Seychelles and Mauritius, is based in the Mauritian capital Port Louis. She was accredited as UNDP representative to Seychelles in 2019. She left the country this morning.