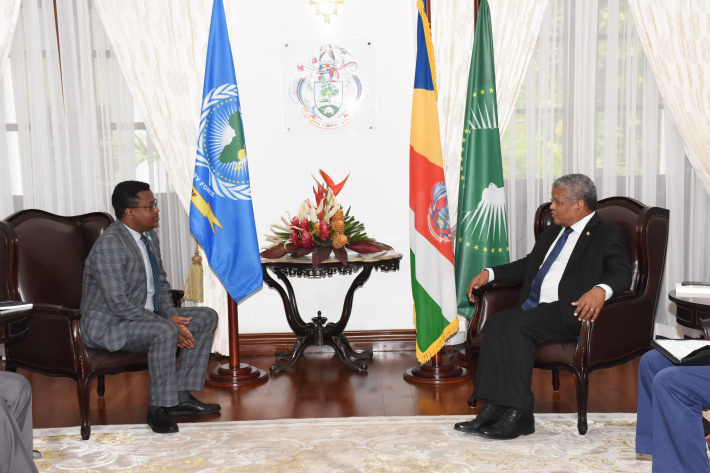 Director of the Eastern Africa Standby Force, Brigadier General Getachew Shiferaw Fayisa called on President Wavel Ramkalawan at State House yesterday afternoon, where they engaged in discussions with a focus on enhancing peace and security in the Eastern African region.
As a regional organisation, the Eastern Africa Standby Force’s (EASF) primary mandate is to enhance peace and security in the region.  It is one of the five regional multidimensional forces of the African Standby Force (ASF) consisting of military, police and civilian components, established as a regional mechanism to provide capability for rapid deployment of forces to carry out preventive deployment, rapid intervention, peace support and stability operations and peace enforcement.
“We discussed many issues, as EASF is a regional organisation, we updated him as to our organisation. As you are aware, EASF is a multidimensional force that has been here for the last 14 years, so we updated the President as to the areas that EASF needs cooperation from regional and sovereign organisations. We also updated him on how to strengthen regional security,” said Brigadier General Fayisa.
“Our member states have different needs and interests in the area of security and maritime, so this is one of the areas where we work together to maintain our regional peace and security. We are not only focused on maritime security, as we have police force, military force and civilian force, all of which are responsible to our regional peace and security, so we work and cooperate together in all these areas,” Mr Fayisa noted.
With the general elections held last year, an international delegation from EASF arrived in the country on October 9 for the election observer mission.