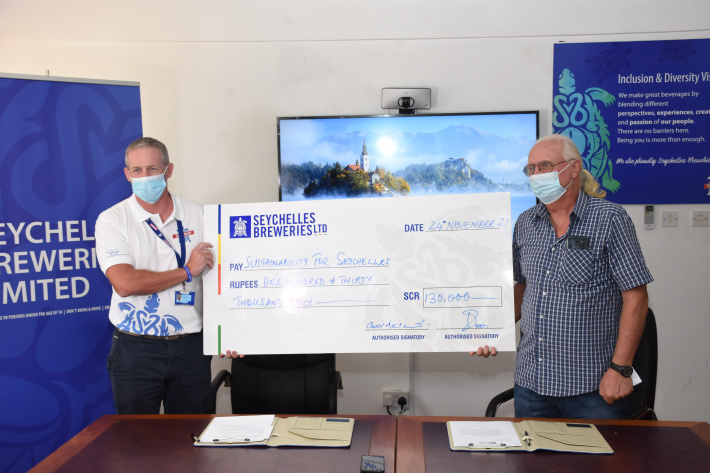 The Seychelles Breweries Limited (SBL) has donated R130,000 to Sustainable for Seychelles (S4S) for the implementation of drip irrigation projects on three farms in South Mahé.

It was the managing director of the company, Conor Neiland, who presented the cheque to S4S project leader, Walter Mittelholzer, in a small ceremony that took place last week at the brewery’s head office at Le Rocher, after both had signed a memorandum of understanding (MoU).

Present were some members of staff of SBL, including its chairperson Anthony Smith and the managing director of Africa Emerging Market, Andrew Cowan.

The donation is part of the company’s water replenishment programme in which it endeavours to give back to the community through different kinds of water conservation projects, some of which it uses in its production process.

It is to be noted that since SBL started its water replenishment project in 2019, over eight farmers from the Val D’Andorre region have benefited from its assistance. The money will be used to purchase and install a special pressured control drip irrigation system on each farm. The system will be imported from Israel.

Mr Neiland said that with the company entering its 50th year since 1972, the donation is very important because it feels that through the partnership with S4S and others, it is giving back to the community.

He stated that water conservation is something that is important to the company as a business and in the brewing process it is important for them also to conserve the water they use as efficiently as they can.

He said it is important for the company to continue these associations with S4S to benefit the community.

He vowed that the company’s support to the organisation will continue.

According to Mr Mittelholzer, the pressure control drip irrigation system is better than the sprinkler system as it does not need electricity or the use of a pump to make it work.

He added that the system minimises water consumption by the crops by 50% and it also prevents the growth of weeds as the water drips down to the plant only by pipes placed horizontally or vertically.

He added that together with Seychelles Breweries, apart from installing the drip irrigation system for the farmers, they also built small water reservoirs directly on the farm for the farmers to store water.

Mr Mittelholzer said that they hope to install the system on many more farms and he thanked Seychelles Breweries for its generous donation and continued support. 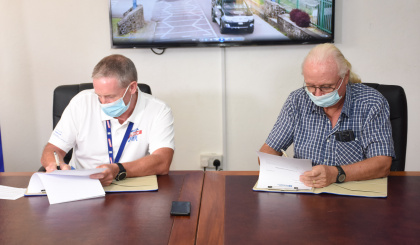 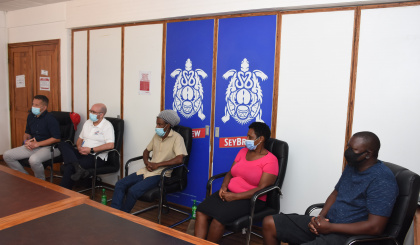 The three beneficiaries of the project (Photo: Thomas Meriton)