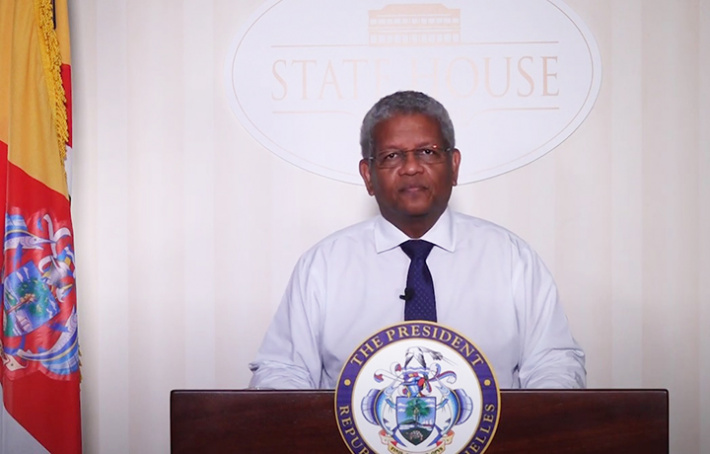 President Wavel Ramkalawan took to the main broadcasters yesterday night to issue a short message to the population, in which he assured peace and stability in the country, and said there is “no talk of a coup d’Etat, no plans of subversions, no plans of violence”.

The head of state called out to the population to stop speculation and rumours concerning the ongoing investigations by the Anti-Corruption Commission of Seychelles (ACCS) and the police in relation to the disappearance of the US ($) 50 million donation from the United Arab Emirates to the republic in 2002.

The head of state highlighted the importance of allowing the institutions to conduct their work in a professional manner, and upholding the rights of suspects as per the Constitution.

It was on Thursday that the first two arrests were made, followed by a third arrest on Sunday November 21.

“In their investigations, they had also discovered certain arms and ammunition, and the police are in possession of these arms and ammunition, and they are conducting their own investigations. Automatically, this has resulted in many rumours and speculations among our population, and over the weekend, I’m sure that you all received all sorts of messages and I too received these messages, which is why tonight I am telling you, there is no reason for people to have any fear, and I ask that these rumours and speculations stop. These speculations and rumours are not doing our country any good. Some people, when they hear or read these messages, are led to live in fear. Do not let these words bother you. I stand before you to tell you that our country has all the necessary stability. There is no talk of a coup d’Etat, no plans of subversions, no plans of violence. On the other hand, our country is walking towards peace, on the road to prosperity and we are doing extremely well,” said President Ramkalawan.

“Let us remember that in our country, our principle is rule of law, we operate by the law. I ask that we allow the institutions to conduct their work in all independence. It is not the Seychellois population who will judge these individuals, but the court will decide, and everyone, even those who are arrested, have their rights under the law, their rights to a lawyer to defend them. So, let us please allow the different institutions to do their work in a professional but right manner, while respecting the Constitutional rights of everyone,” President Ramkalawan stated.