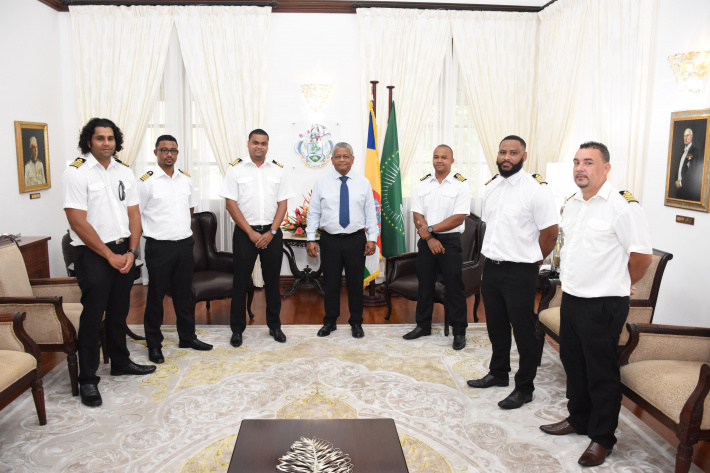 The master mariners and chief engineers in a souvenir photograph with President Ramkalawan (Photo: Thomas Meriton)

President Wavel Ramkalawan met with a group of Seychellois master mariners and chief engineers from the Seychelles Petroleum Company at State House yesterday morning, where he congratulated them on their newly awarded credentials.

The seafarers ‒ captain Roy Buisson, captain Fred Esparon, captain Daryl Anthony, captain Jean-Paul Fanchette, chief engineer Martin Roucou, and chief engineer Saman Clarisse ‒ have been recruited, trained, and employed by the Seychelles Petroleum Company (Seypec) over the past seven years and through the necessary sea-time and academic studies have excelled in their different capacities.

“It is an honour for me to receive you all here at State House today and I would like to congratulate you all and express our sincere appreciation for your many years of sacrifice and dedication. You are role models for our Seychellois youths and your achievements should be an inspiration for them. I am very proud to see that Seychellois are the ones managing and operating the fleet of tankers. I would also like to commend the management of Seypec for the pivotal role they have played in making your studies possible and being able to be fully-fledged trained Seychellois,” said President Ramkalawan.

The group of six were accompanied by the chief executive of Seypec Conrad Benoiton, general manager for commercial at Seypec Sarah Romain and head of shipping Alain Asba, where they interacted with the president on their individual journeys towards accomplishing the higher posts, in line with Seypec and government’s visions to have 100 percent Seychellois operated Seypec tankers in the foreseeable future.

“Today was a moment to show off the crew on board Seypec tankers, and it was a moment for us to congratulate the crew, the master mariners and chief engineers, who have reached this level today. We are proud today to see the number of crew who have achieved a higher rank on their tankers. We have six master mariners, and three chief engineers, but only one has been promoted to the chief engineer rank, so we have two onboard tankers working. And we have four here who have their certificates for masters. Today, we would like to show appreciation towards the mariners, who have traced a difficult route to get to where they are today. And Seypec is very proud to see Seychellois in these posts, posts whereby they are operating the vessel and in charge of the vessel, and this is the audience that the president accorded the mariners, and we are very proud today,” Mrs Romain noted.

In addition to congratulating the seafarers, President Ramkalawan emphasised the urgency in continuouslypromoting training and continuously encouraging youths to take such positions.

At present, Seypec’s six tankers are operated by crews comprising 50 percent Seychellois. Since 2013, the organisation recruits youths annually for training and career opportunities with the entity. This year’s campaign is targeted mainly at engineering enthusiasts, and persons who are interested in qualifying and serving as third or second engineer, and eventually chief engineer.

“Maybe within the next five years, we can have tankers that are 100 percent Seychellois operated. We are yet to achieve this objective. For instance, we do not have enough engineers as we do for captains, therefore upcoming officers, there are some officers who will attain these ranks, but we want to encourage the younger ones, especially those who are still in school, sitting their A-Levels or at professional centres to seriously consider such a career. It is a demanding career but which is also rewarding,” Mrs Romain assured.

Mr Asba assured that as long as Seypec owns tankers, the organisation will continuously focus on training and development of local talents to eventually localise all positions onboard the tankers.

Master mariner Fred Esparon received his master mariner’s certificate in May, after undergoing training courses through Seypec. Asides from discussing training, the seafarers also addressed with the president the possibility of a new fleet of tankers.

In regards to a career with Seypec, Esparon is of the view that a significant proportion of youths are interested and encouraged to follow in their footsteps.

“There are many youths who are interested in taking the career path, but some of them lack the training. I was captain onboard the tanker that left Seychelles in 2016, but in May 2021, I received my master mariners certificate for bigger vessels. There are not many challenges, but I appreciate that I have the opportunity to serve in this position. Over the years, I received training through Seypec and it all went well,” Mr Esparon noted.

Captain Roy Buisson received a scholarship from the government of Seychelles to follow a pre-sea training (deck) and obtained Basic STCW proficiency certifications at the Australian Maritime College (Australia) in 2002. He joined Seychelles Pride in 2002 as a deck cadet along with another of his colleague who is also a captain on board our fleet, captain Adrian Mondon. He also briefly worked with Mahé Shipping as a deck cadet on board the Spirit of Praslin in 2003. In 2004-2006, Buisson enrolled with AMC (Australia) to follow an Advanced Diploma of Applied Science (Nautical Science). He received his credential in 2007.

During his career, he worked for three other companies, Unicorn Shipping ‒ a well-known company in South Africa ‒ as third officer, second officer and chief officer. He also worked for two offshore companies, namely Swire Pacific Offshore on their seismic vessel which was doing oil exploration in the Mozambique channel and Anchor handling tug which was working on the west coast of Africa. He also worked for a Dutch company on their Floating Production Storage offloading (FPSO) as a marine supervisor and was based in Australia. Mr Buisson re-joined the Seychelles fleet in 2019 as a chief officer for two terms before he was contracted as master on board Seychelles Paradise in 2019 and Seychelles Patriot.

Captain Fred Esparon joined Seypec in 2007 after his GCE A-Levels at the School of Advanced Level Studies (Sals). Between 2007 and 2012, he obtained his Basic and Upgraded STCW proficiency certifications at the Australian Maritime College, Australia. After completing his Advanced Diploma of Applied Science (Nautical Science) course at the same institution in 2011, he was awarded with his CoC (Certificate of Competency) as junior deck officer by the Australian Maritime Safety Authority (AMSA).

Thereafter, in 2012, after amassing some sea time experience and passing his oral exam, AMSA awarded Esparon with CoC as a master class 3 ˂ 1600GT. The same pattern followed whereby he was awarded his CoC as chief mate with unlimited operational license in 2014. In 2018, Esparon followed a preparatory course at the University of Tasmania, Australia (UTAS) and undertook Master Oral examination at AMSA whereby he was awarded with an unlimited operational license in December of the same year.

In terms of career with Seypec, Esparon started off as a deck cadet in 2007, then progressed to third officer in 2011, then second officer in 2012. He was promoted to the rank of chief mate in 2016 and also served as master on board MT Seychelles Paradise between 2016 and 2019.

Esparon served his first contract as a master on the deep sea tanker MT Seychelles Patriot from May to September 2021. He is now on leave for a period of four months before his next foreign going contract on the same vessel.

Captain Daryl Anthony graduated with honours after following a BSc in Mechanical Engineering from the University of Manchester between 2003 and 2006.

Anthony joined Seypec in December 2006 and through a company scholarship he was enrolled with the Australian Maritime College (2007-2011) to follow an Advanced Diploma in Applied Science (Nautical Science) course. Upon meeting all requirements Anthony obtained his CoC as OOW (Unlimited) license from AMSA thereafter.

Upon undertaking further studies and meeting all requirements, Anthony obtained his CoC as chief mate (unlimited) license from AMSA in 2016. With further sea time experience and additional training, he obtained his master CoC from AMSA in 2019. Although Anthony is yet to take command as master on the foreign going vessel, with his current competence he has served as master on board the local based tanker, MT Seychelles Paradise between 2017 and 2021 for a total period of 10 months.

Thereafter, Seypec funded him with a scholarship to follow a Bachelor of Science in Nautical Science/Officer of the Watch, at the Cork Institute of Technology (Ireland) between 2009 and 2012. He graduated in 2013 with a ‘distinction’.

Fanchette served as master on board MT Seychelles Paradise in 2019 (for 2months) and again in 2020-2021 (total of 4 months 14 days). Although he is yet to take command as master on a foreign going tanker, Fanchette is a fully-fledged master mariner with more than 67 months sea-time experience. He has been highly recommended by his mentors/superiors for promotion prospects once a vacancy arises.

Chief engineer Martin Roucou joined Seypec in 2006 and served as an engine cadet before progressing to the National Maritime College of Ireland (NMCI) in 2008 to follow a four-year BSc in Marine & Plant Engineering, which was sponsored by Seypec. Roucou excelled from his cohort whereby upon graduating from the degree programme in 2012 he was named outstanding student.

Chief engineer Saman Clarisse joined Seypec in 2009 in order to obtain sea time in accordance with the requirements of the Bachelor degree in Marine & Plant Engineering (Government of Seychelles sponsored scholarship) he was following at the Cork Institute of Technology (Ireland). He graduated in 2013 with a distinction and thereafter obtained his third engineer license with the Irish department of transport and tourism. With this license he could also serve as second engineer for near coastal area in motor ships of less than 3000kw.

Clarisse explored other professional avenues whereby he followed a management degree with the Institute of Commercial Management in 2014 and obtained distinction for the modules followed. From September 2016 to January 2017, through a bond support from Seypec, Clarisse was enrolled with NMCI (Ireland) for preparatory course to obtain his second engineer license. After successfully passing his oral with the Irish department of transport and tourism, Clarisse obtained his second engineer license.

Laura Pillay / Press release from the Office of the President