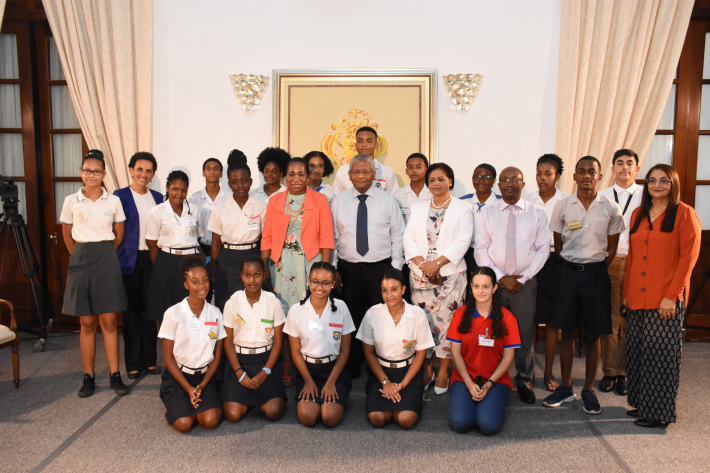 The students in a souvenir photograph with President Ramkalawan and other guests after the debate (Photo: Thomas Meriton)

The dialogue, organised by the National Council for Children (NCC), under the umbrella of the Ministry of Youth, Family and Sports, was held in commemoration of the day that Seychelles joined over 178 other countries to guarantee the rights and protection of children.

The exchange with the head of state at State House brought together students from both public and private schools who addressed their concerns and issues through questions to President Ramkalawan.

Misael Bristol, one of the youths to first address the National Assembly on Universal Children’s Day observed annually on November 20, and a student of the School of Advanced Level studies, moderated the dialogue. In starting, he said children of Seychelles must be heard, that they have the right to participate in the development of the country, and that they also have concerns which they want leaders to take into consideration.

“Too often we look at the youths as the leaders of tomorrow but I don’t like to do so, because I believe that you are the leaders of today. Within your own rights, you are leaders,” President Ramkalawan stated.

Among the concerns which were raised by the students were the possibility of establishing a specialised sports facility for youths, new school facilities for La Digue, aquaculture and how it will be beneficial to the country. Questions were also raised as to plans to further address the persistent substance-abuse problem plaguing the youths, mental health, LGBTQI, and punishment for violations and abuses to children.

President Ramkalawan noted that he has taken the decision to develop the Praslin stadium into a centre for athletes from both Praslin and La Digue to participate in activities, and develop themselves in their respective disciplines. As for La Digue, construction plans have been finalised while government tries to secure the funding for the project.

With regard to the cost and quality of internet services, the president assured the youngsters that government is in dialogue with service providers, the results of which will become evident next year with cheaper prices and eventually, improved quality, through a project that will see the installation of an additional cable.

The president also called out for the family structure to be strengthened, and for parents and adults to be responsible in caring for, protecting, nurturing and preparing the children and youths to inherit the country and be leaders.

President Ramkalawan also admitted that instances of theft are increasing, as well as sexual abuses on minors, where he called for more stringent punishments. He, however, acknowledged the police force and increase in apprehensions for criminal activities.

In concluding the dialogue, the president conveyed his appreciation for the exchange and the pertinent and well-researched questions, thought-up by the students themselves.

“You give me hope, hope that Seychelles is in good hands, because it is in your hands. Therefore, with the partnership between the old leaders and you as young leaders, I am hopeful that we can direct the country in a good direction,” said President Ramkalawan.

“I want to encourage you youths to grow up in the correct manner. Do not let yourselves get pulled into negative influences. Practice what is good and encourage your friends to also do the same, and when we do this, we can move further forward. Remain focused. There is a lot of noise around you at this particular age, but know what you want to do in life and remain focused on that goal. When you remain focus, you will achieve, you will always be moving forward and you will be successful. Of course, it will not be an easy feat, but the hero lies in you,” President Ramkalawan said addressing the students, assuring them of his administration’s continued support.