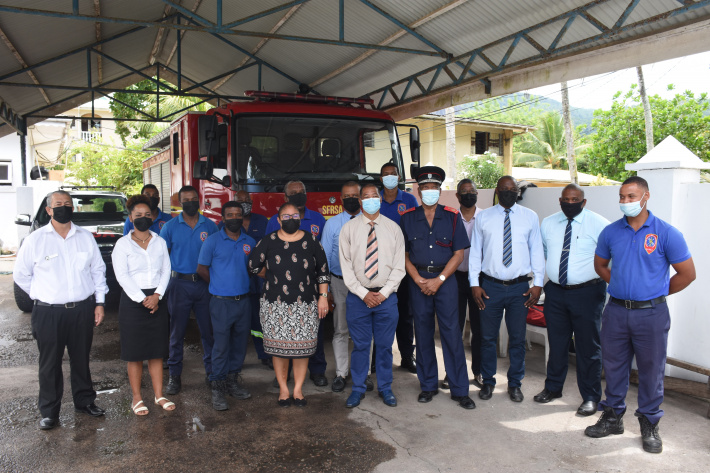 Fire and rescue officers and other employees based at the fire station at Anse Boileau on Saturday received a visit from members of the National Assembly’s Defence and Security Committee.

The committee members were received and led on a tour of the fire station by chief fire officer Albert Rose and station officer Philip Thomas.

Mr Rose explained that the building had remained unoccupied for some time before he requested for it to be used as a fire station for that region as they were looking for a facility to provide the service in the region.

The officers took the opportunity to put forward all their constraints mainly with regard to the physical space which they say is too small and difficult for them to operate in.

After the visit and discussion with the fire officers, Mr André noted that “the Anse Boileau fire station was already on our programme of facilities providing services in the community to visit before the budget debates and we wanted to find out what was the issues related to the station. After our visit we found out that the station may be small but it is faced with big problems.”

He pointed out that there was a private investor who pledged to finance the construction of a new building to house the fire station without a cent from the government, but due to some constraints the Seychelles Fire and Rescue Services Agency (SFRSA) is facing, they cannot move forward.

“The major issue is the diversion of the road used currently by locals and the planning authority is asking them to do the diversion which is not under their jurisdiction. A diversion should automatically involve the Seychelles Land Transport Agency and other departments,” Mr André pointed out.

“The other major issue we found is that government asked the investor to hand over the money to them so that they can develop the project! The investor did not agree to that. It is normal to allow investors to build something on their own with correct specifications and then hand it over to the government. It is important that we allow private investors to help in the development of the country and we should not burden them with constraints,” Mr André remarked.

The current location of the Anse Boileau station is very small and 21 members of staff are using the station (seven staff per three shifts).

Mr André also noted that the new development should take into account the coming years and the land belonging to the SFRSA should be used to the maximum and an appropriate facility with two floors at least should be constructed on it.

The small station has four units – the administration, operations, prevention and safety as well as training.

The visit ended with Mr Rose giving an overview of the equipment and fire tenders readily available to be deployed in case an incident occurs.

Following the visit at the fire station, committee members also visited the nearby police station where they were welcomed by superintendent ASP Antoine Denousse and station commander, sub-inspector Samuel Cadeau.

The accompanying photos show members of the committee during their visits to the Anse Boileau fire station and the district’s police station. 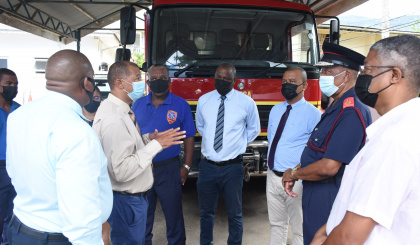 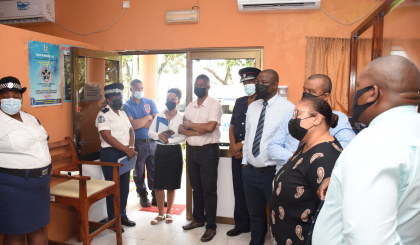