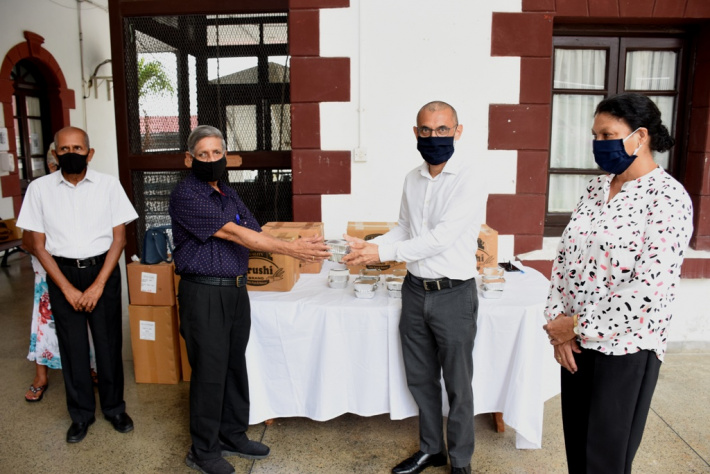 The Hindu Council of Seychelles has donated Diwali delicacies to the Health Care Agency to be distributed among members of staff.

The council’s chairman, Narasimhan Ramani, presented the traditional Diwali sweets to the chief executive of the Health Care Agency, Dr Danny Louange, in a brief ceremony on Tuesday in the lobby of the Red roof administrative block of the Seychelles Hospital.

This was in the presence of the deputy chief executive of the agency, Kathleen Cecile, and other members of the Hindu Council.

Speaking about the donation, Mr Ramani said it was in recognition and appreciation of the effort and sacrifices made by the health workers in the fight against Covid-19.

He further said that they have shown determination to stage a fight in defence of others, sacrificing their own health and comfort.

He added that when governments across the world were trying to safeguard their citizens, the white-dressed army was called upon to provide a shield for the population.

He said by exhibiting their courage and selflessness right from the first sight of the dreadful virus, its transmission and through the vaccination campaign, the health workers have all stood to the real meaning of ‘devanam, maushya roopanam’ meaning that God always appears in the world in the form of a human to uphold righteousness.

“When our small country stands tall in the fight against Covid-19 and the vaccination drive, we should all feel proud of our health workers who are the cause for such a world achievement,” Mr Ramani said.

On behalf of the Health Care Agency, Dr Louange thanked the Hindu Council, through Mr Ramani, for the generous donation.

He said the gift will motivate the staff in the fight against the virus while they also get to participate in the Diwali celebrations to spread love.

“It is a donation that touches the heart and that means a lot to us. This gesture really shows that the community out there supports us in the fight against Covid-19. It also indicates that the community is thinking about us and it is also ready to help us to get stronger to fight this fight together,” Dr Louange said.

Mr Ramani stated that traditionally the Hindu Council used to hold a big cultural event for the Diwali Festival and as has been the case for the past two years, this year also the event will not take place due to the pandemic and “it is the reason why the council has dedicated this Diwali to the selfless service of our health professionals”.

Diwali is a festival when all Hindus around the globe celebrate the victory of good over evil or the triumph of light over darkness. 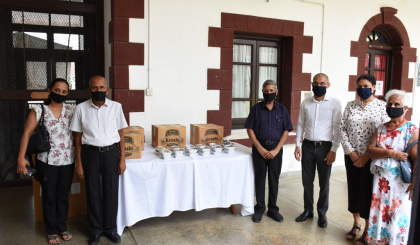 A souvenir photograph to mark the event (Photo: Thomas Meriton)