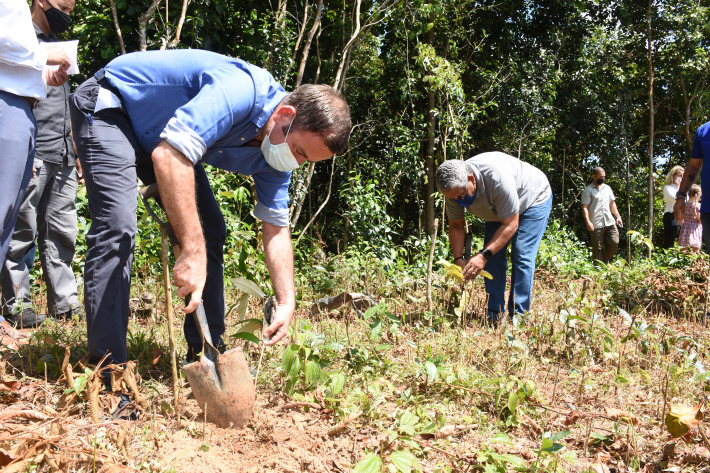 President Wavel Ramkalawan was joined by COP26 delegates from Seychelles in a tree-planting carbon-offsetting activity at the Salazie Trail in the Morne Seychellois National Park.

The activity was part of a ‘Green Footprint Seychelles’ reforestation and restoration pilot project initiated by the British high commission and the Seychelles Parks and Garden Authority (SPGA).

The aim of the project is to test a scientifically-based tree planting scheme, to address the environmental impacts and green house gas emissions of long-haul travel and tourism.

Two sites in the area have been cleared from alien species, such as cinnamon tress and CHlidemia hirta (Fo Watouk) among others, for the pilot project, where 900 mimusops sechellarum (Bwa-d-nat) and Heritiera littoralis (Bwa-d-tab) trees will be planted on the 3500 square metres of the accessible forest.

Also present to plant the two types of trees in the area were the British high commissioner to Seychelles, Patrick Lynch; the principal secretary for Climate Change in the Ministry of Agriculture, Climate Change and Environment, Wills Agricole; the former climate change ambassador for Seychelles at the United Nations, Ronny Jumeau; the chief executive of SPGA, Alan Cedras and other representatives from the Ministry, the high commission and from SPGA.

As Seychelles will be represented by a delegation, led by President Ramkalawan, at the COP26 climate talks in Glasgow from October 31, 2021 to November 12, 2021, the tree-planting activity yesterday was to offset their carbon footprint emissions. Some 200 Heritiera littoralis (Bwa-d-tab) and 100 mimusops sechellarum (Bwa-d-nat) trees were planted with the help of SPGA’s forest field workers, to add up to the 200 trees of both species that had already been planted.

HC Lynch said that the project will build the opportunity for incoming visitors to play an active part in biodiversity restoration and the reforestation of our country. He further said that in preparation for the UK government’s leading role in responding to the climate crisis as host of November’s COP26 climate talks, the BHC has recognised that the crippling blow to the tourism industry from Covid-19, has accelerated long-term projections on the decline of long-haul air travel, which may bring a severe economic contraction to our country over the longer term.

This, he noted, coupled with the increased environmental conscience of European travellers, has already threatened to have a disproportionate impact on us, with European tourists becoming increasingly conscious of their ‘carbon footprint’.

The development and delivery of activities under the ‘Green Footprint Seychelles’ campaign would serve as just one small part of a developing movement, driven by local conservation and tourism experts, which would present an opportunity for our country to use its world leading environmental expertise and its entrepreneurship spirit, to promote itself as the green choice for European tourists.

“This activity will not be a one-off. We are already planning to move to other rehabilitation sites in our National Parks, such as Praslin and Curieuse National Parks. We are willing to partner with new organisations and companies to create new bonds and give the public a chance to give back to the environment and contribute to Seychelles’ climate change mitigation strategy,” said Mr Cedras, who thanked BHC for the financial support and expertise to the project.

In his comment, HC Lynch said: “We are delighted to welcome President Ramkalawan and members of the Seychelles COP26 delegation to the site of this pilot tree-planting initiative which the British high commission is supporting, in partnership with SPGA’s local expertise. Although tourists are now returning to these islands, providing an immediate economic boost to the country, this may temporarily mask a longer decline in long-haul travel, with trends such as ‘flights –shaming’ gaining prominence in Seychelles’ primary European markets,” he stated.

The HC added that the great news is that our country, more than any other country in the world, provides fertile ground for a ‘Green Recovery of Tourism’, which could turn consumer demand into an economic opportunity.

He further noted that under the ‘Green Footprint Seychelles’ project, visitors can have the carbon generated by their flight calculated to a corresponding number of trees, in order to offset that impact. The scheme is scientifically verified, and has been developed into a very appealing activity product for visiting visitors.

“As President Ramkalawan and his delegation offset carbon emissions of their flight to Glasgow ahead of November’s crucial climate talks in Glasgow, the UK government looks forward to welcoming the Seychelles delegation to COP26, so that the rest of the world can benefit from Seychelles’ expertise and knowledge, in its innovative and world-leading efforts to adapt to, and mitigate against climate change,” HC Lynch ended.

Mr Cedras later said that due to Covid-19 restrictions not all members of the delegation were able to make it to plant 11 trees each and that will be done on the second site when they will return from the COP26 meeting.

He said that other plants will also be planted to prevent the invasive species to reproduce.

Patrick Joubert/press release from the BHC 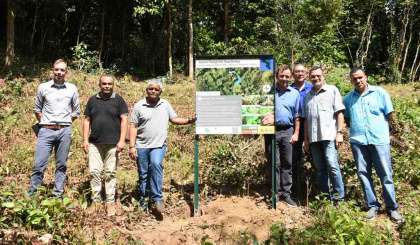 A souvenir photograph at the tree-planting site (Photo: Jude Morel)