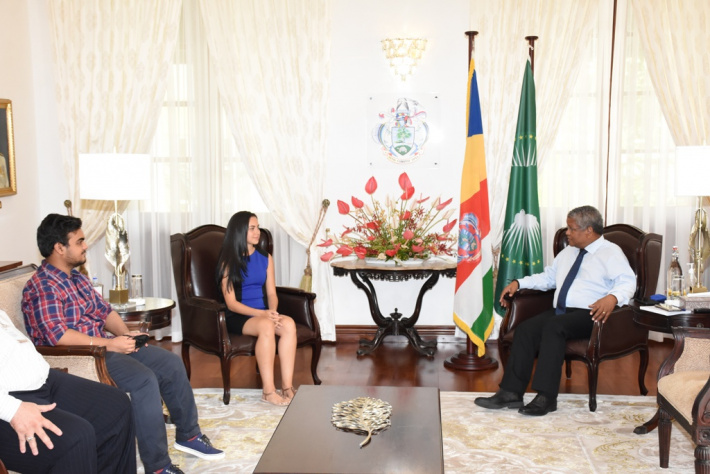 The two high achievers during their meeting with President Ramkalawan (Photo: Joena Meme)

President Wavel Ramkalawan yesterday met with two students who achieved top scores in their A-Level exams, coming out above the rest to be ranked top globally and nationally in their respective subjects.

Ayush Rai and Nicole Adam achieved outstanding results in the November 2020 examinations and were recognised with the Cambridge high achievement award certificates for the subjects they excelled in.

They were both accompanied by their respective parents during the meeting with the president.

Aside from receiving heartfelt congratulations from the head of state, the high achievers were able to sit down and discuss with the president regarding their achievements, studies and plans for the future.

“I did not expect to receive the award at all even when my parents told me; it took some time for me to process it. It was not easy especially with the whole Covid-19 situation and I decided to not take my predicted grades in May/June so I actually sat my exams in November last year, so I had more time to work on my coursework[…],” stated 19-year-old Adam.

“The president asked of my future plans and how I could contribute to the country in the future because we need more people in that field especially. We also spoke of how we had put Seychelles on the map and made more people realise that we can produce a lot even if we are small,” she added.

Adam is hoping to pursue a degree in Tourism and Hospitality Management next year and has already been accepted in one university thus far.

On his side, 18-year-old Rai is aiming towards a Bachelor of Science as well as an Integrated Masters in Physics in the UK so as to become a physicist.

“I did not expect to win the award and didn’t even know it was there, so I was quite surprised when I got it and was filled with joy. I didn’t know I got it in the beginning until one of my friends called and told me that there was a post on Facebook and I was so proud and happy, and there were so many emotions at that one moment,” stated Rai.