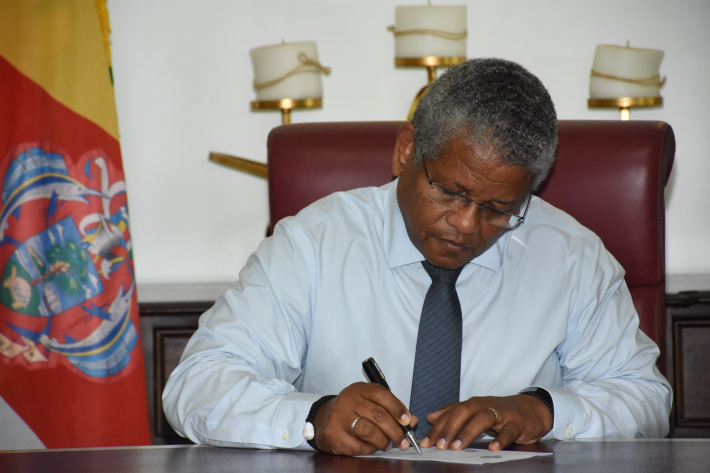 President Wavel Ramkalawan has assented to the Penal Code Amendment Act (2021), which was approved by the National Assembly on October 6, 2021.

The Act has two main objectives, the main one being the removal of criminal defamation from the law, by removing Sections 184 up to Section 191 from Chapter 19 of the Seychelles Penal Code.

As the Office of the Attorney General advised the National Assembly during debates, criminal defamation is an outdated concept, and is inconsistent with the norms and practices of international agreements which Seychelles has signed, including Article 19 of the International Convention on Civil and Political Rights and the provisions of the Universal Declaration of Human Rights, which condone the limitations of criminal defamation on freedom of expression.

During his address, President Ramkalawan spoke of the importance of having the persons who actively pushed for the removal present to witness the momentous signing, and which is of significance to the local media.

“As we are all aware, the whole concept of criminal defamation has been used to stop journalists from doing their jobs, for them to be arrested for defamation, sent to prison, newspapers heavily fined. I am very happy that we have reached this point here in Seychelles, and of course, it has to do directly with journalism and that the media can be free to practice their trade. Of course we expect responsibility,” President Ramkalawan stated, noting that the legal provisions for civil defamation are still in place.

In addition, he said that he thought it important to assent to the law in the presence of the press and those who were behind the removal.

Criminal defamation has only been applied once in the jurisdiction in modern times, with the case of Bernard Sullivan. However, criminal defamation is often used on the African continent to restrict the media, President Ramkalawan added, although he assured the public that government remains committed to upholding the rights of the media and media practitioners in Seychelles.

In turn, the chairperson of the Association of Media Practitioners Seychelles (AMPS), Rassin Vanier, said he is satisfied, and that the assent is a win for journalists.

“I think that for the country, it is a great day for journalists because we know that now, the part of the law which was very constraining has been removed. And on the international front, when they analyse our laws and situation, it places us at another level here in Seychelles today. I think that as of now Seychelles will not be classed as a country where journalists are not free to do their jobs, where the laws are constraining. I think today is a very important day for us,” Mr Vanier said.

“The law needs to come with some responsibility. As the President stated, the police will not arrest anyone concerning defamation. But there is also a responsibility as a journalist. This law does not mean that we can go out there and start insulting or publishing just about anything on a person, but it means that we need to conduct our work in a more professional manner for ourselves and our audiences,” Mr Vanier said.

The Act also addresses the age of criminal responsibility and makes provisions for bomb hoaxes.