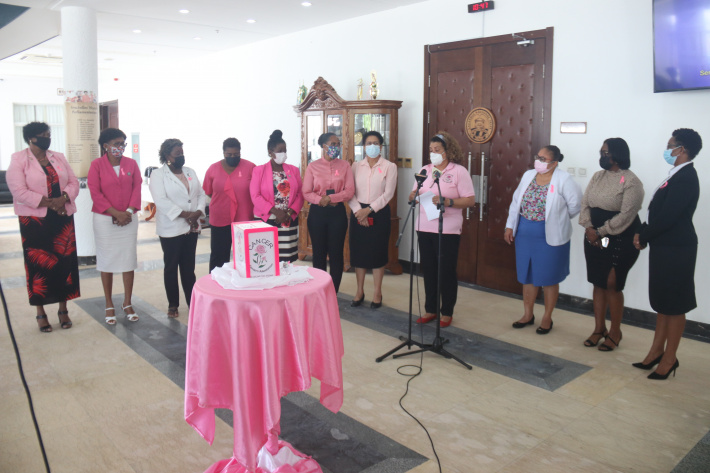 The handover of the donation (Photo: Jude Morel)

The Women’s Parliamentary Caucus in the National Assembly yesterday donated R6100 to the Cancer Concern Association.

It was the chairperson, Honourable Regina Esparon, who presented the money, from a donation box, to the secretary of the association, Gina Laporte, in a small ceremony held in the lobby of the National Assembly.

The generous gesture by the women in parliament to the association was in commemoration of Cancer Awareness Week, with special emphasis on breast cancer. The money has been contributed by members of the National Assembly and staff from the secretariat.

Also present were representatives from the secretariat.

Vice-chair of the caucus, Hon. Vidot, said the gesture shows the engagement on their side in supporting the association’s programme in its fight against breast cancer, although the sum presented might be small.

She noted that apart from the working collaboration in the fight against cancer between the caucus and the Cancer Concern Association that has existed since the 6th Assembly, they will continue to be involved, especially through sensitising the public on the disease.

On her part, Mrs Laporte thanked the Women’s Parliamentary Caucus for the generous donation and for its engagement in the fight against cancer, especially breast cancer.

She noted that the money will go towards assisting cancer patients.

She further added that the association has recorded an increase in the number of cancer patients calling for assistance.

She noted that breast cancer is the highest cause of death in cancer patients.

Mrs Laporte said that among the tasks, the association will reach out more to people in the community so that they get to know the functions and assistance it provides.

She urged everyone, especially women, to do their regular tests for cancer as the disease is curable upon early detection.

Speaker Mancienne commended the efforts and initiative taken by the Women’s Parliamentary Caucus to help in the fight against cancer.

He added that the National Assembly will continue with its engagement to fight against the disease.

He also called on cancer patients to come forward and to make known of their difficulties and challenges so that they can get the required care and assistance.