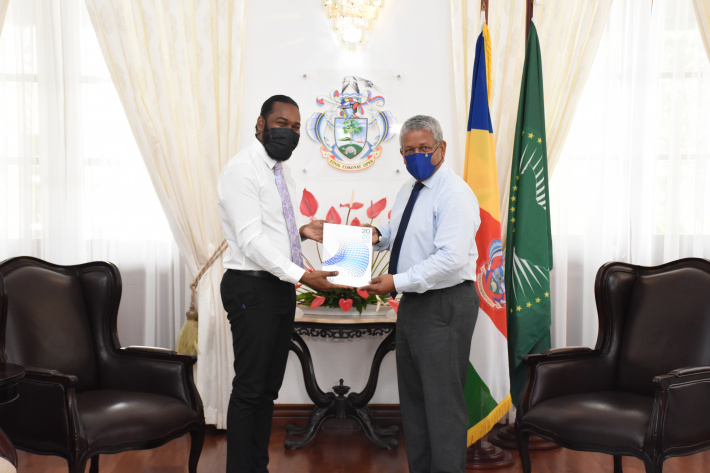 President Wavel Ramkalawan has been presented with the Financial Intelligence Unit’s annual report 2020.

The report, which contains the functions and work done by the Financial Intelligence Unit (FIU) in 2020, was handed over to the president by its director Richard Rampal, yesterday morning at State House.

The report was submitted in accordance with the provision section 24 of the Anti-Money Laundering and Countering the Financial of Terrorism Act, 2020.

Speaking to the press after presenting the report to President Ramkalawan, Mr Rampal said the report represents the progress of activities that the FIU has been doing in 2020 in the fight against money-laundering and financing of terrorism despite the Covid-19 pandemic.

He noted that there has been an increase in suspicious transactions in the country which means more analysis have been undertaken by the FIU to which information gathered has been disseminated to law enforcement authorities. He stated that most reports of these suspicious transactions came from local banks and from the international business companies in the off-shore sector.

He added that the unit is happy with progress made in 2020, noting that the FIU has even started to make some dissemination to sectors felt usefully in supporting their work in combating money-laundering and financing of terrorism in the country.

Mr Rampal said although the fight against money-laundering and financing of terrorism is no easy task, the unit will remain committed in what it has to do to stop such activities from happening.

The FIU will continue to increase its operational output through liaising more with domestic institutions to allow access to the widest possible range of financial, administrative and law enforcement information including commercially held databases aimed at reducing delays and ensuring timely analysis and dissemination.

Another area of focus for 2021 will be on developing knowledge (strategic intelligence) as it relates to money laundering and terrorism financing and other threats to the security of a country’s financial systems in order to produce strategic analysis products.

Cabinet considers a number of policy and legal memoranda |04.08.2022