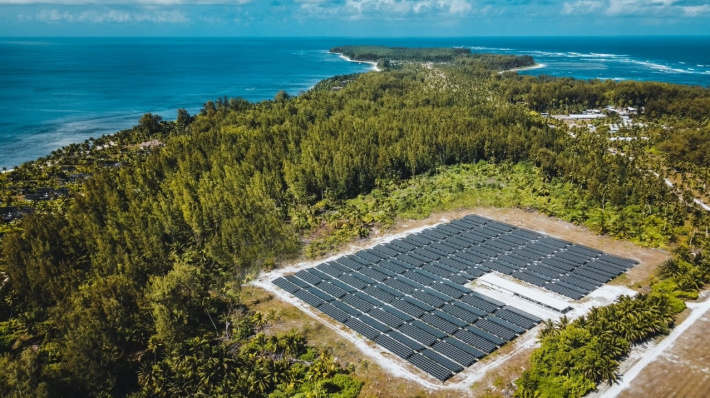 The Islands Development Company’s independent power producer solution that provides competitively-priced power and without a large upfront financial burden is the kind of experience that should be shared with the different partners to help them make that critical decision.

The remark was made by the Minister for Agriculture, Climate Change and Environment, Flavien Joubert, during the inauguration of a new 2.5 megawatt (MW) photovoltaic (PV) solar farm on Desroches, cutting the island’s consumption of fuel by 90 percent.

The new project was officially inaugurated on Saturday by President Wavel Ramkalawan and the chairman of the Islands Development Company (IDC) board Patrick Berlouis, in the presence of Vice-President Ahmed Afif, First Lady Linda Ramkalawan, cabinet ministers, chief executive of the IDC Glenny Savy, general manager of the Four Seasons Resort Nick Solomon and IDC board members.

Half of the power produce by the new facility, which is the country’s second-largest solar plant after the one on Ile de Romainville, will be absorbed by the Four Seasons Resort on the island.

It is the first phase of the IDC’s energy master plan which will be followed by another photovoltaic solar farm on Ile Platte.

Minister Joubert described the event as a milestone in the history of the island’s development as well as in the government’s endeavour to increase renewable energy in the country.

On behalf of the government, Minister Joubert commended the IDC and its team for being steadfast in its effort to install solar farms on its respective islands, especially in a time when the Covid-19 pandemic has made the cost of business operations very challenging.

The inauguration, he said, other than illustrating how the IDC has been sustainable in meeting and providing energy demand for the picturesque tourism island, also answered the call of the government to increase the usage of renewable energy in the country, since with a growing population, the demand for electricity and water will increase drastically.

As such, Minister Joubert noted that Seychelles has set a target of 15.5 percent energy efficiency and 15 percent renewable by 2030.

“These targets are very ambitious for a small island developing state and Seychelles is currently producing 5 percent renewable energy and will need to scale to 10 percent in this decade, taking into account economic growth,” noted Minister Joubert, who further added that our recent revised National Determined Contributions sets an even more ambitious target of being net-zero by 2050.

While showcasing the achievement of Desroches Island, Minister Joubert launched a challenge to other private islands, both the inner and outer, to start this conversation to exceed a 50 percent target of renewable in the energy provision, and why not aim for a 100 percent renewable as is the target set for Curieuse Island.

To conclude, Minister Joubert reminded everyone that since Seychelles is also faced with the daunting task of combating climate change, the government on its own cannot achieve the country’s target of becoming a climate resilient economy, and that it will need the support and engagement of all partners, including private entities, the civil society and individuals in both introducing renewable and being energy efficient.

Addressing those present, Mr Berlouis reminded them that the environment and its conservation is very much woven into the fabric of the IDC, while it is important to note that the second strategic goal of the company is to integrate environmental and sustainable principles in island development, while one of its strategic objectives is to explore and introduce renewable energy projects on the islands in a effort to reduce reliance on fossil fuel and operational costs.

He thanked overseas companies METTLE Solar Investments and Sustainable Power Solutions (SPS) for providing the finance, equipment and expertise towards the project, as well as local engineering personnel and the island’s construction team and other staff for all the planning and getting all the thousand and one elements of the logistics in place to make it a reality.

With the island’s tourism establishment consuming almost half of the energy produced by the facility, Mr Solomon said it portrays a reduction of around 90 percent of the previous consumption of around 55,000 litres of diesel per month.

This, he said, is a massive change since the establishment is very focused on sustainability and to run on renewable energy is something very exciting that they are proud of.

The new facility was built by Sustainable Power Solutions (SPS) – a South African-based distributed renewable energy company that provides solar energy solutions to business customers across sub-Saharan Africa –, and the Mettle Solar Investments which is a leading pan-African commercial and industrial solar platform company that provides a variety of affordable renewable energy solutions to commercial and industrial customers.

According to Mr Savy, the only financial input of the IDC was through the concrete pillars supporting the PV panels.

He explained that the IDC is simply buying electricity at a cost of USD$0.19 per kilowatt, as compared to USD$0.42 with the use of generators.

Mr Savy also revealed that the next stage of IDC's energy master plan is a 2.5-megawatt solar farm on Platte Island to provide energy for a 42-room resort which is currently under construction.

He however explained that due to the limited space on land on Platte Island, the panels will be placed in the sea.

Mr Savy also revealed that the IDC has plans to set up smaller systems, precisely on the islands of Marie-Louise, Desnoeufs, Remire and Poivre.

As for Coëtivy Island, which has been targeted for economic activities, he said 50-kilowatt modular system will be put in place, with the option of supplementary panels, depending on demand, according to the rate of the activities.

Desroches is the largest island in the Amirantes (394 hectares) and the closest to the granitic islands, lying 230 kilometres southwest of Victoria.

It is a sand cay on the western edge of a submerged atoll about 20 kilometres in diameter. The island is just over 5 kilometres long but only 330 metres wide at its narrowest point.

A channel northwest of the island is about 1.6 kilometres wide and 18 metres deep, allowing even cruise ships to enter the calm waters of the lagoon, within which there is little variation in the depth at around 25 metres.

It was named in the late 18th century in honour of François Julien Desroches, administrator of Ile de France (now Mauritius).

On English charts it was called Wood Island, because of the extensive native forest.

The accompanying photos show highlights of the inauguration ceremony. 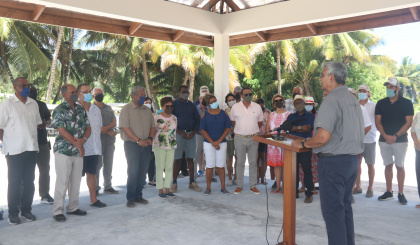 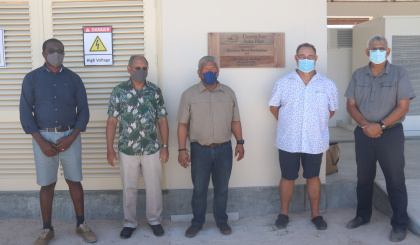 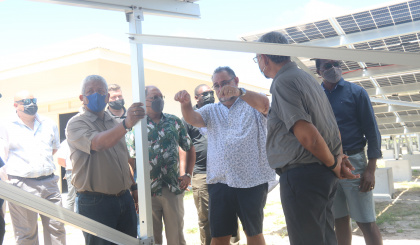 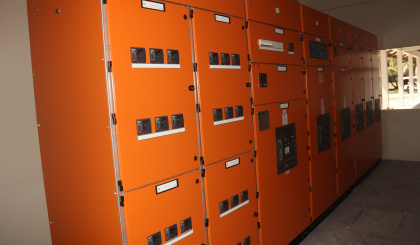 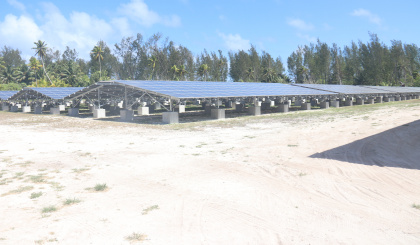