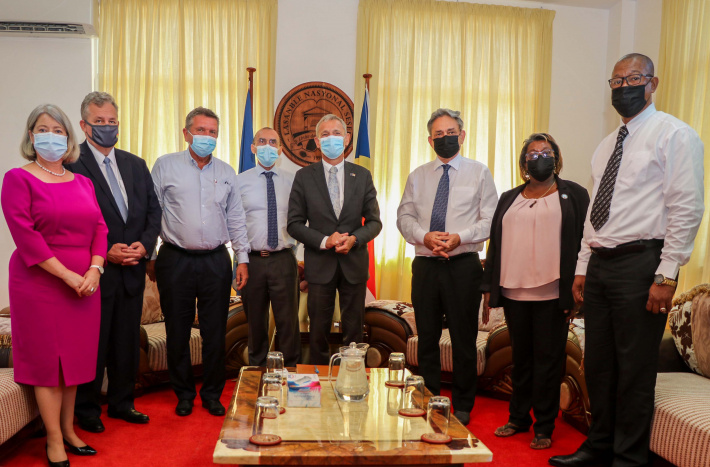 The two delegations in a souvenir photograph

A delegation of ambassadors from the European Union (EU) paid a courtesy call on the Speaker of the National Assembly of Seychelles, Hon. Roger Mancienne, on Tuesday.

The EU delegation was headed by Vincent Degert as the ambassador of the European Union.

Speaker Mancienne started off the meeting by expressing his appreciation for being able to meet with the delegation to discuss important matters.

Ambassador Degert equally expressed his gratitude for the opportunity to meet with the Speaker and the members present.

During the meeting, Mr Degert pointed out that this meeting was a great opportunity to utilise their time here in Seychelles to build on the existing relationship between Seychelles and the EU.

He noted that the EU and Seychelles share similar democratic values and this is one of the reasons why the relationship has been able to grow stronger over the years.

Hon. Esparon raised a few critical and urgent matters that the Caucus has been advocating strongly for to the delegation such as gender-based violence. Ambassador Degert expressed that the EU is interested in such matters and that it sees the issue of equality of men and women as a pivotal matter for society to focus on.

Hon. William as the chairperson of the IAC also mentioned that he is glad to see the continued cooperation between the EU and Seychelles especially in areas related to climate change and biodiversity conservation.

Seychelles especially is affected by these aforementioned factors therefore continued negotiations need to be done to find solutions.

Mr Degert agreed with the members and he also noted that when it comes to international affairs, there are always new arising matters that require attention, especially in areas such as maritime security whereby piracy and drug trafficking are major threats to the region.

Over the last few years, the EU as well as Seychelles have also been affected in several ways due to the Covid-19 pandemic, and the EU recognises that new approaches need to be taken to make sure that economic recovery is smooth and that action is still taken to address matters related to climate change.

Ambassador Degert assured the chairperson of the IAC that the EU will stay committed to help Seychelles and give its support to ensure that Seychelles reaches its targeted goals in terms of climate change mitigation and adaption.

To conclude the meeting, the Speaker reiterated how the EU is an important partner for Seychelles and as a group of influential countries, they can work together to make real progress and change to help Seychelles reach its desired goals for the betterment of the people.

He also thanked all members involved in ensuring that the cooperation stays strong and hopes that all the new members and partners involved in the collaborative processes will be equally glad to join the team.